The battle is over. There are clear winners. The answers to the questions haven’t changed.

Around 80% of the ACE respondents edit on Avid, on a Mac, cutting with HD media, on network storage probably from Avid, on productions that use multiple digital cameras. The rest of the survey questions divide up what people are working on and how its released to the market. There isn’t much point to a survey that returns the same answers every time.

That said, here are the latest results.

Avid continues to dominate, and is likely to continue with its lowered price and the opening of the platform to other hardware and to being software only. It doesn’t hurt Avid that Apple killed the Final Cut Pro brand with the release of FCP X, software that is incapable of working in a professional editing environment.

Lack of competition, though, is bad. Perhaps more attention will be paid to Adobe’s Premiere Pro, or some as yet unknown software.

Platform hasn’t changed in a long time, but it might soon. Many technology watchers believe Apple will update the Mac Pro towers in the not too distant future, for the last time. Windows 8 anyone? 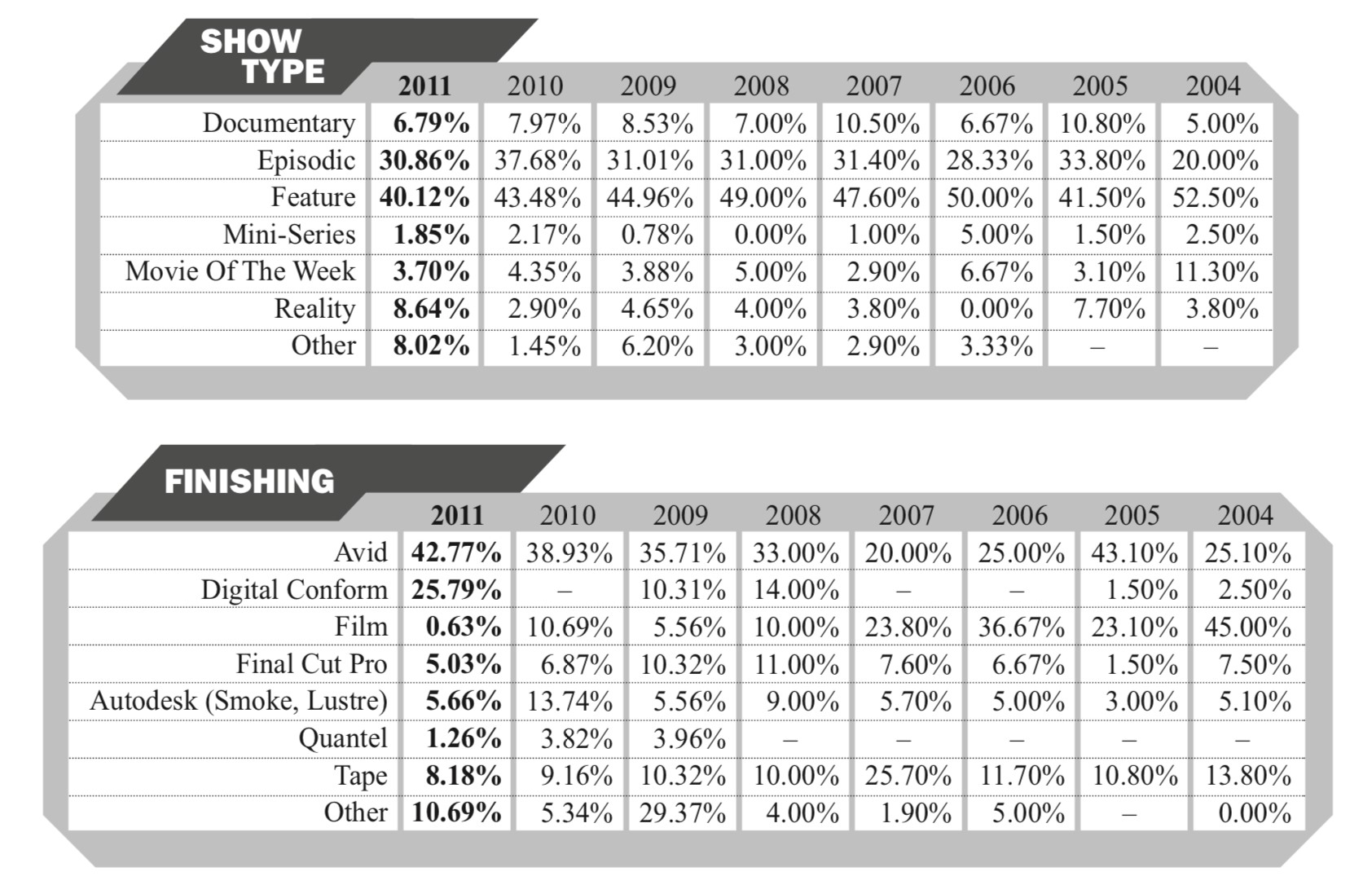 Finishing is another category that isn’t changing much.

The finishing process still has the most variables. There are many solutions that work well. What makes this more complicated is the development of new digital cameras. Each camera manufacturer has a different idea of what file type to create, and different ways of making it to post-production. Oddly, the simple and old technology of timecode is the only bullet proof system for assembling a finished project.

I think this category reflects the increased amount of cable work for ACE members, and the decreasing trend of feature work. More cable channels making more shows, and less features for theaters.

Along with finishing, delivery formats are still varied. It will be interesting to see if networks are more receptive to file based delivery. The tsunami in Japan forced the issue for a while with the destruction of Sony HDCam SR tape manufacturing plants.

The good news as there are fewer bad editing system choices, so it is less relevant who chooses the system.

How did we ever work in standard def? It looks soooo awful.

Using multiple camera types will be the norm, I believe. The important thing to remind production is that the media has to be at one consistent frame rate. You simply cannot mix frame rates and have the images look good.

3D: a number of members worked on 3D projects, some shot in 3D, many converted. And many reported taking the class at Sony on 3D post.

The Technology Frustration responses were quite varied: some members don’t like the latest changes in Media Composer, others felt the MC VFX tools aren’t advanced enough, while others felt lack of knowledge of the VFX tools was a problem.

One respondent: “My constant biggest frustration and fear is feeling behind the curve in the technical abilities required of the editor. My assistant … has always taken care of doing the VFX shots for me, but when a director wanted to play with the look of flashbacks, he expected I would be able to do that while he waited… I’m not sure how I should learn those things.”

ACE will be exploring ways of answering some of the questions posed in the survey. The people at Avid will get a copy of the survey results, to view all your questions and issues.

But all editors have to find ways of answering that question of technical prowess. You either have to know your technical limitations and tell the director to wait. Or you have to keep learning, keep experimenting, keep asking questions, keep watching tutorials. It takes time and effort.

But I think it helps keep us employed.

So, this survey of ACE members will continue in some form, but the questions will have to adjust. To something we don’t already have the answers.

The battle is over. Avid won the battle of the non-linear editors (NLE’s). But is Avid Technologies profitable and strong enough to survive? They’ve become a much better company for their customers with the new management. Could another company take them over, one with no respect for the editing community?

Then who will win the war?