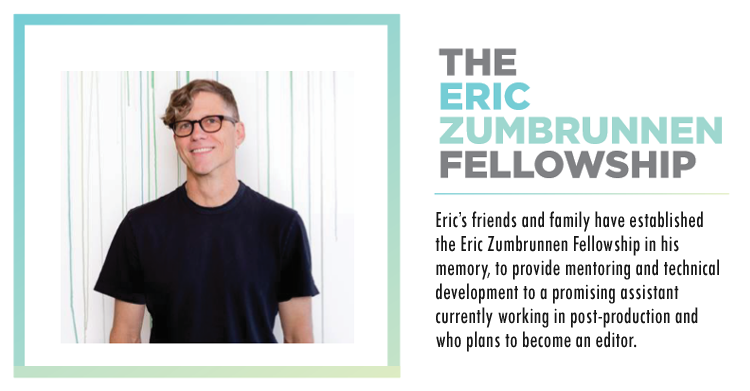 ACE is very proud to support The Eric Zumbrunnen Fellowship.

Known to many as “EZ,” Eric Zumbrunnen graduated from USC with a degree in Journalism, and began his professional life in video post-production.  A proficient guitarist, his affinity for music informed his early work editing music videos. He developed close collaborative relationships with a few directors, and subsequently expanded into commercials for clients such as Nike, Xbox and Apple, and ultimately into feature films.  He perhaps most notably found his creative kindred spirit in director Spike Jonze. The pair’s harmonious, highly successful collaboration spanned two decades.

A member of American Cinema Editors since his first feature, Being John Malkovich which earned him an Eddie for Best Edited Feature Film (Comedy),  Eric brought his love of a good story well told to Adaptation, Where the Wild Things Are and  Her, as well as John Carter, for director Andrew Stanton.

In 2014, Eric Zumbrunnen co-founded Santa Monica and New York-based post-production company EXILE with partners Kirk Baxter, ACE, Matt Murphy and Carol Lynn Weaver.  Regarded as one of the most technically proficient editors of his era, one who approached editing with insight and eloquence, Eric valued the opportunity to learn from the gifted writers, directors and editors he worked with. While he held himself and his co-workers to a high standard, he was also committed to encouraging and mentoring other editors and would-be editors.
`

All contributions made to the ACE Educational Center are considered charitable tax deductions. 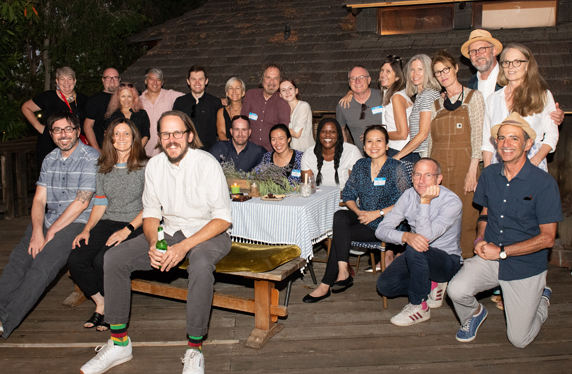 Early this August, 2020 Eric Zumbrunnen fellow Matthew Allen organized an evening at Matt Chesse’s Assembly Hall to meet in person with the editors who mentored him remotely during the pandemic, as well as friends of the fellowship and previous years’ fellows.  We all enjoyed the opportunity to catch up.

Derek Drouin has been working as a Visual Effects Editor on The Batman, at Warner Brothers.  Carmen Hu assisted Stephen Mirrione remotely during the pandemic, on Netflix’s Midnight Sky and Escape from Spiderhead, and is currently working on Thor: Love and Thunder at Disney.

In addition to throwing a really nice party, Matt Allen recently finished editing his first feature film, American Murderer, which is expected out in 2022.

We are proud of the work they’re doing, and also proud to see all of the fellows supporting each other and reaching out to encourage other aspiring editors.

Neither a scholarship nor a grant, the Eric Zumbrunnen Fellowship harnesses the goodwill of American Cinema Editors, Adobe, Avid, Pix, Media Arts Lab and Eric’s friends and colleagues to provide our fellow with state of the art tools, hands-on opportunities, and the wisdom of many of the talented and experienced professionals Eric worked amidst.

We’re looking for someone:

– who is currently working in post-production

– who is dedicated to pursuing a career as an editor

– who is based in, or planning to relocate to, Los Angeles, California

– who is willing to put in their own time for meetings, screenings and mentor-assigned projects