Alexandre Donot is a film and TV editor based in Paris. Before graduating from La Femis (the French National Film School) in the editing department, he spent one year at UCLA TFT, as an exchange student. He started his career as an assistant editor for Hervé de Luze on multiple films, then went on to editing feature films including the Cesar nominated Guy, directed by French actor/director Alex Lutz. The film was also selected at the Semaine de la Critique at Cannes 2018. 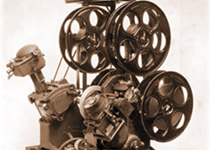 My grandfather Jean Saby is 18 years old. He’s on his way to a local theatre with his dad. They buy their tickets. Jean doesn’t exactly know what he is going to see, just that the troupe is led by actor and director Jean Dasté. My grandfather has heard of the name: Jean Dasté has starred in a few movies. The theatre company is new and came to tour in the area from Paris, with a play called Noah, written by contemporary playwright André Obey.

It starts with Noah building his Ark and addressing God in a very familiar way. The crowd laughs. The staging is very simple, very modest: an empty stage, few accessories, the actors embodying different kinds of animals. The acting is pure and it touches my grandfather to the heart. He used to tell me, “I fell in love. I was hooked that very day.” This performance is the birth certificate of what will become La Comédie de Saint-Étienne, one of the first Centre dramatique national (National Center for Dramatic Arts), a consequence of a new public policy called “décentralisation théâtrale” (theatrical decentralization).

As a teenager, my grandfather experienced the War. Saint-Étienne, as an occupied city, saw its industrial plants requisitioned by the Germans and the city was bombed by the Allies in order to cut the Nazis’ industrial supplies. He spoke a lot about hunger and rationing, although I know that he also helped get bodies out of a bombed school, an event you would now politely call “collateral damage.” Psychological and physical scars were disfiguring the country. Occupation, deportation, collaboration… France had to be rebuilt materially and spiritually to become a society again.

During the war, the “Resistance Council” constituted by women and men coming from different political backgrounds wrote commandments to be applied when the War would be over: new workers’ rights, voting rights for women, social security, etc. The theatrical decentralization was born from this spirit, in 1947. Art, and especially theatre, was needed to bring back a common cultural good along with common stories. Pioneers like Jean Dasté in Saint-Étienne or Jean Vilar in Avignon made it their mission to show Molière, Marivaux, Shakespeare or the Noh theatre across the country.

This period was the golden age of “popular theatre” in France, especially for remote cities, the countryside, and blue-collar areas. Inspired by critic Jacques Copeau’s work at the beginning of the century, popular theatre went back to its antique roots: text driven, with simple sets and costumes. The acting was naturalistic and refined, very much inspired by Stanislavsky. Copeau was indeed fed up with the Parisian theatre of the “Grands Boulevards,” consisting of vaudeville romances, stars and expensive productions for a bourgeois audience. The repertoire of this “decentralized theatre” was mainly classical, yet opened to contemporary writers. For instance, the first French representation of Brecht’s “Caucasian Chalk Circle” was in Saint-Étienne, staged by Jean Dasté, in front of an audience of miners and factory workers. Dasté’s goal was to strike a balance between comedy and drama, modern and classical. Some plays were more accessible than others, but nonetheless, the audience trusted Dasté’s vision.

Dasté’s theatre troupe played in cinemas, under marquees, in front of factories … Regardless of their social classes, people would gather to see Dasté’s next play no matter what that may be, in the same way that audiences would go to the cinema to watch the next Renoir or Tarantino film. This loyalty to a single artist is how “auteurs” will later be defined by critics of the New Wave. “Avant-garde” and “popular” were never meant to be opposing concepts. On the contrary, Dasté always wanted to address all kinds of people. His main concern was to weave a link between the text, the actor and the audience.

If you are a cinephile, then you must know Jean Dasté. At least what he looked like. He played the young boatman in Jean Vigo’s L’Atalante; Docteur Pinel in François Truffaut’s The Wild Child. He also acted for Jean Renoir, Costa-Gavras, Henri Verneuil, Bertrand Tavernier and many times for Alain Resnais. He was the link between several “auteurs” of different generations. Beyond being beloved as an actor, it was his personality that drew people in. He represented both modernity and tradition.

Jean Dasté died in 1994 in Saint-Étienne, and to this day, he is still surrounded by a religious aura. The pioneers of the “theatrical decentralization” started out with little but grew a tremendous cultural heritage: La Comédie de Saint-Étienne is now part of a network of hundreds of public theatres in France. This artistic and political movement, established by the government after World War II and carried out by visionaries, has been a bit forgotten. Its ongoing legacy needs to be celebrated and defended every day, not as a cost, but as an investment for future generations.

My grandfather was so inspired by Dasté that he decided to build his own theatre in Saint-Étienne, all the while keeping his day job as a railroad worker. He taught classes and directed plays, sacrificed some of his family life to his everyday passion for theatre. He had a huge impact on my career choice by sharing his heritage with me. Later on, I was lucky enough to get into the editing department of La Fémis, the French national film school, and can’t help but wonder: Would I be working in the film industry without public theatre? Probably not.

Art evolves in times of crisis. Along with “theatrical decentralization,” anti-realism came up as a solution to depict the horror of WWII and the new complexity of the world. In literature, “Le Nouveau Roman” spearheaded by authors like Marguerite Duras or Alain Robbe-Grillet, deconstructed and reinvented storytelling. This writing style rose in opposition to propagandas and the rejection of linear stories, with authors trying to find ways to depict more complex emotions and nuanced characters.

Filmmaking also had to reinvent its form, especially through the process of editing. In the United States in 1943, Orson Welles started to establish a new level of character development complexity. In Citizen Kane’s opening, Welles mocks the media by depicting them as they try to answer the question: who is Charles Foster Kane? He is “a Communist!”  No, he is “a fascist!” and Kane to answer: “I am, always have been, and always will be only one thing – an American.”

Even though film has the ability to reproduce reality through a mechanical process, artists post World War II discovered that it could never accurately represent the complexity of the world. This idea is at the core of why cinema needs auteurs, because filmmaking has to do with morals. As Godard once said: “Tracking Shots are a question of morality.”

Alain Resnais’ Hiroshima Mon Amour deals with the representation of the horror of Hiroshima. Resnais knew that the raw reality of that situation was too complex and too horrible to be shown. He instead created poetic images such as the iconic shot of ashes falling over the lovers’ bodies. The reality of any given situation will always be more dreadful than any images filmed or recreated to illustrate it. That’s why Eiji Okada responds, “You saw nothing in Hiroshima,” contradicting Emmanuelle Riva and at the same time, the audience’s beliefs.

In 2011, as a trainee editor in my third year at La Fémis, I worked on Alain Resnais’ film, You Ain’t Seen Nothing Yet. Resnais was in his late eighties: His body was tired but his mind still sharp. His film was almost entirely shot on greenscreens, and the set was recreated in CGI. The film was an adaptation of two of Jean Anouilh’s plays. It was full of ideas and attempts to push the boundaries of cinema. Resnais played with his audience, wondering what was fake, what was real. He was like a child, playing with toys. Even his storyboard was shot using Playmobil toys as actors.

When Hervé de Luze, the chief editor, asked me to go to Resnais’ home near the Champs-Élysées to pick up some music, I was almost in shock. I had the chance to spend an entire hour with him, enjoying coffee in his apartment. I discovered someone who was very curious, and very young, too, in his outlook on life. While his films can be considered austere and intellectual, he wasn’t. He didn’t seem to differentiate popular and academic culture. In the ‘70s he was contacted to shoot an adaptation of Spider-Man that in the end never came to life.

We discussed his tastes: He was a huge TV series addict, and a big fan of J.J. Abrams. His regret at the time was that he couldn’t go to the movies to watch Super 8. At some point during the conversation, he said, “I told you a lot about me, now tell me about yourself.” After stuttering for a while, the first thing I told him about was Jean Dasté’s story, and how my grandfather decided to start his own community theatre after he saw his play, Noah. Resnais was very attentive, and very moved by what I told him. Dasté acted in four of Resnais’ movies. “Jean Dasté was such a delightful actor,” he confided in me. And just like that, the circle was complete: from Jean Dasté to the French decentralization, my grandfather, and Alain Resnais…

Today, a huge crisis is rising ahead of us. It is killing hundreds of thousands of people and shaking the way we see the world at its core, driving us to rethink its excesses and its crimes. I can’t help but draw a parallel at this time of lockdown, between what Europe experienced during WWII and what we are experiencing today as a human community. Things are speeding up, and we already find ourselves looking at the images of the world before March, at the crowds in the streets and the dinners we shared with our relatives, thinking of them as archival images of a time revoked.

What sort of new era is awaiting on the other side? How will literature, filmmaking, theatre and painting be shaped? Surely, we need art to bond our society together and to compensate for what politics and money can’t provide:  dreams and beauty, laughter and tears, transmission of culture from one generation to the next.

I’ve always thought that the act of bringing people together to hear a story, whether through cinema or theatre, would be the last thing we could do if some kind of apocalypse happened. Ironically, it’s the first thing we can’t do. I hope that in the coming years, we will have the chance to have bright emerging minds, such as Resnais’, Dasté’s or Welles’, to rethink the world and its representation.  I hope that our generation will be brave enough to reinvent new forms and new ways to bring people together, that will be equally intelligent and entertaining. It is now essential that we believe in the art we’re making for the world to continue flourishing. We need to remember that we all are craftsmen at work for our community, and now, more than ever, we should employ all our playfulness and wonder when describing the world ahead of us.