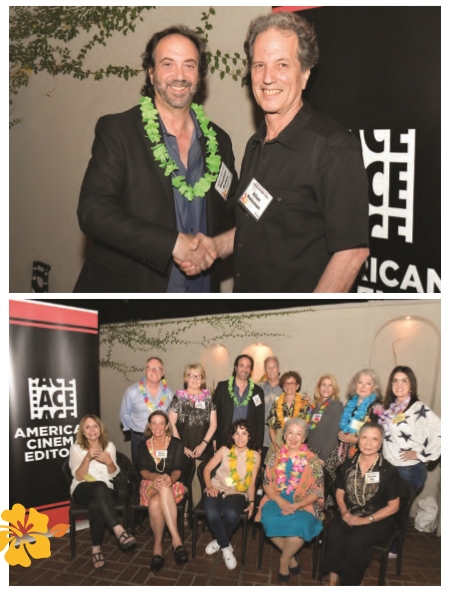 Presenting the award, ACE president Stephen Rivkin, ACE, noted that in addition to IAVA, Holzman suggested that ACE team up with a publicist, and both efforts have helped to raise awareness of editing and of ACE. He described Holzman as a “filmmaking chameleon, working in narrative, documentary, big budget and independent, genres from comedy to drama, action to musical.”

Rivkin also gave special thanks to outgoing Vice President, Alan Heim, ACE, who chose not to run for re-election after more than 25 years on the board. “He will always be an inspiration to the ACE board, and we hope you don’t stay away too long,” he said. Heim served four terms as president and four as vice president. 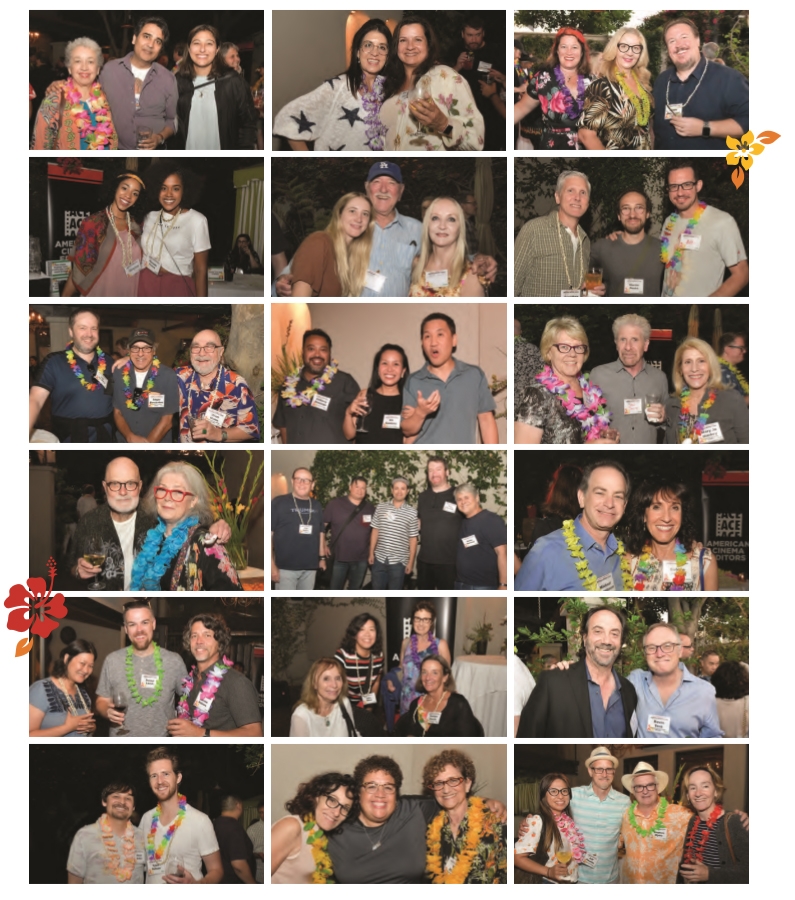 ACE is delighted to announce that two distinguished editors and ACE past presidents – Alan Heim, ACE, and Tina Hirsch, ACE – will be honored with ACE Career Achievement Awards, on Jan. 17 at the 70th ACE Eddie Awards.

Alan Heim won an Academy Award®, BAFTA® and ACE Eddie for Bob Fosse’s All That Jazz in 1979, after earning one prior Oscar® nomination for Sidney Lumet’s Network in 1976. He won two additional Eddie Awards for Introducing Dorothy Dandridge and Grey Gardens, and shared an Emmy® for his work on the TV miniseries, Holocaust. Recently, Heim completed more than 25 years of service on the ACE Board of Directors, which included serving four terms as president, from 2004-2008 and 2012-2016, and four terms as vice president, from 2008-2012 and 2016-2019, during which time he was tireless in his advocation of our craft.

Tina Hirsch’s early feature work began with Macon County Line in 1974 and followed with Roger Corman’s Big Bad Mama, Death Race 2000 and Eat My Dust! When she graduated from ‘The Corman School,’ she went on to edit films such as The Driver, Gremlins, Explorers, Twilight Zone: The Movie, More American Graffiti and Dante’s Peak.

During her nearly 30 years on the Board of Directors, Hirsch was the Chairman of the Membership Committee and participated on committees granting ACE internships and promoting diversity within the organization. In 2000, Hirsch became the first woman to be elected President of ACE, a post she held from 2000-2004.

In addition, Hirsch has been an adjunct professor of editing at USC’s School of Cinematic Arts from 2003 to 2016. We congratulate them both on such well-deserved honors. They have made important contributions to the art and craft of editing through their hard work and dedication. In addition, having both served as President of ACE, they brought tremendous awareness and respect to the role of the editor.

Separately, we are pleased to announce that the ACE Student Award has been renamed The Anne V. Coates Student Award, in honor of the iconic editor. The late Ann V. Coates, ACE, earned an Academy Award for David Lean’s Lawrence of Arabia and received an Honorary Award at the Academy of Motion Picture Arts and Sciences’ 2016 Governors Awards. She earned four additional Oscar nominations for Becket, The Elephant Man, In the Line of Fire and Out of Sight.

A Long Time Ago in a Cutting Room Far, Far Away

A Long Time Ago in a Cutting Room Far, Far Away provides a behind-the-scenes look at some of the most influential films of the last fifty years as seen through the eyes of Paul Hirsch, the Oscar-winning film editor who worked on such classics as George Lucas’s Star Wars and The Empire Strikes Back, Brian De Palma’s Carrie and Mission: Impossible, Herbert Ross’s Footloose and Steel Magnolias, John Hughes’s Ferris Bueller’s Day Off and Planes, Trains & Automobiles, Joel Schumacher’s Falling Down, and Taylor Hackford’s Ray.

Hirsch breaks down his career movie by movie, offering a riveting look at the decisions that went into creating some of cinema’s most iconic scenes. He also provides behind-the-scenes insight into casting, directing, and scoring and intimate portraits of directors, producers, composers, and stars. Part film school primer, part paean to legendary filmmakers and professionals, this funny and insightful book will entertain and inform aficionados and casual moviegoers alike. 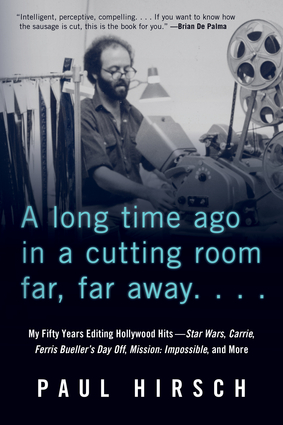 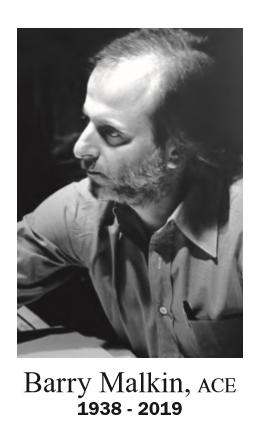 Barry Malkin, ACE – a frequent collaborator with Francis Ford Coppola who was Oscar®-nominated for The Godfather Part III and The Cotton Club – passed away on April 4 after a long illness. He was at his home in New York with his wife, Stephanie, and daughter, Sacha. He was 80.

Malkin was born in New York on Oct. 26, 1938. He grew up in Queens where he was acquainted with Coppola when they were teenagers. After graduating from Adelphi University he sought a career based on his love of films. This began in 1962 when he became an apprentice to Dede Allen, ACE, on Elia Kazan’s America America.

While working there he met Aram Avakian, who hired him as his assistant while edited Robert Rossen’s Lilith. Malkin’s first full editing credit was in television on The Patty Duke Show, and he also edited Avakian’s Cops and Robbers. Through Avakian, Barry became reacquainted with Coppola who then hired him to edit The Rain People.

Malkin also edited TV miniseries The Godfather Saga, for which he structured the first two films into the correct chronological order and included scenes that were not in the original films. On Apocalypse Now Malkin became an additional editor and was supervising editor when Coppola produced Hammett, directed by Wim Wenders. Malkin also edited Coppola’s Rumble Fish, The Rainmaker, Gardens of Stone and Peggy Sue Got Married.

Additional editing credits include Big for Penny Marshall, The Freshman for Andrew Bergman, Four Friends for Arthur Penn and Last Embrace for Jonathan Demme. On May 1, nearly 100 friends, family and former colleagues gathered for a celebration of Malkin’s life, which began with a poignant speech by Coppola, who shared stories from his and Malkin’s childhood in Queens, regaling guests with untold stories about the playground antics of two 14 year olds playing hoops in the neighborhood.

Said Coppola, “I think the evening after our preview of Godfather II, the over 120 changes I made on a finished movie were executed through the night by Barry Malkin, without code numbers, [and] was the most amazing demonstration of editorial skill that I have ever seen. Film going from room to room on the floor and into synchronizer machines since there were no code numbers on the mixed mag track, was actually impossible, but Barry did it.” He added, “Barry was a brilliant man of integrity with a tireless work ethic.

He was a boyhood friend who became my most trusted collaborator.” Dorian Harris, ACE, remembered Malkin
as, “…an ever-curious world traveler, voracious reader, passionate jazz enthusiast and true-blue Yankees fan.” In lieu of flowers donations may be made in Malkin’s name to the Southern Poverty Law Center or The Neediest Cases Fund-NY Times. –Jack Tucker, ACE 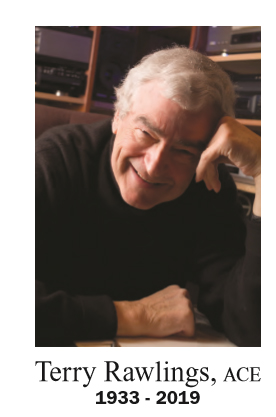 Terry Rawlings, ACE – whose collaborations with director Ridley Scott include classics Alien (1979) and Blade Runner (1982) – died on April 23. He was 85. With a career spanning from 1955 to 2005, he earned BAFTA® nominations for both Alien and Blade Runner.

He was also well-known for editing Chariots of Fire (1981), for which he was nominated for both an Academy Award® and BAFTA. Rawlings was born and educated in north London and entered the printing trade upon leaving school. Between 1951 and 1953 he was a radar operator in the RAF as part of post-War national military service.

After leaving the forces he joined Rank Screen Services at Pinewood Studios in 1955 as an assistant librarian despite professing to have no ambition to get into the film industry. The work did however gain him a union card and his career progressed when he was asked to assist on the sound of Town on Trial, starring John Mills, for director John Guillermin.

Over the next few years he gained experience assisting in the sound department on features including Stanley Donen’s Cary Grant- and Ingrid Bergman-starring Indiscreet (1958) and 1961 comedy Petticoat Pirates. His first lead role as a sound editor was on 1962’s prison-set comedy, The Pot Carriers. Arguably, Rawlings’ big break was dubbing sound for Bryan Forbes’ The L-Shaped Room in 1962. This critically-acclaimed hit was the forerunner of British independent ‘kitchen-sink’ dramas like Saturday Night and Sunday Morning which tackled controversial social issues (in this case pregnancy out of wedlock).

Rawlings’ first partnership with director Michael Winner was The Jokers in 1967 starring Michael Crawford and Oliver Reed. Together they made 11 pictures, with Rawlings responsible for sound editing on The Mechanic and Chato’s Land, two hard hitting American-set action films starring Charles Bronson.

He was also music editor on Russell’s screen version of The Who’s rock opera, Tommy (1975). After Winner trusted Rawlings to complete the picture edit of supernatural horror The Sentinel (1977), when the original editor dropped out, his career took a major change of direction into full film editing. That year he had already worked with Ridley Scott on sound editing his feature debut, The Duellists, and the director invited Rawlings back to edit Alien.

Released in 1979, the picture redefined both horror and science-fiction storytelling, entered cinema folklore and led to multiple sequels including David Fincher’s Alien 3 in 1992 which Rawlings was widely credited as saving in the edit. With Scott again on Blade Runner, Rawlings had to work away from the Warner Bros. lot and was credited only as supervising editor because he did not belong to an American film union.

Rawlings was never happy with the film’s voice-over narration or happy ending which were required by the studio and were removed along with reinstatement of unicorn footage to signify Deckard’s dreams in the Director’s Cut release in 1992.

He co-devised with director Colin Welland, the slow-motion opening and closing sequences of British sprinters run- ning barefoot along a beach to Vangelis’ score on Chariots of Fire and helped revive the James Bond franchise with Pierce Brosnan’s debut as the spy in GoldenEye (1995).

Other features of note which he edited included Legend, starring Tom Cruise, also for Scott; action films The Saint (1997), U.S. Marshals (1998), Entrapment (1999) and The Core (2003); the 1990 comedy, Bullseye! (1990), starring Roger Moore and Michael Caine; and musicals Yentl (1983) starring Barbra Streisand and The Phantom of the Opera (2004) for director Joel Schumacher, which was Rawlings last major credit.

Always modest about his significant achievements and talent, he received a total of five BAFTA award nominations – three for film editing and two sound – as well as its 2014 Special Award, and was honored with the ACE Career Achievement Award in 2006. In 1960, Rawlings married Louise Kirsop, a secretary at Elstree Studios. He is survived by his wife and their three sons, David, Robert and Simon. –Adrian Pennington