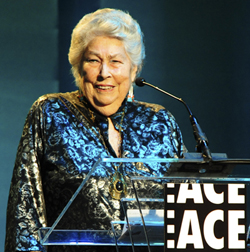 The late Anne V. Coates, ACE, earned an Academy Award for David Lean’s Lawrence of Arabia and received an Honorary Award at the Academy of Motion Picture Arts and Sciences’ 2016 Governors Awards. She earned four additional Oscar nominations for Becket, The Elephant Man, In the Line of Fire and Out of Sight.

ACE honors her contribution to the art of editing by naming this award, the “Anne V. Coates Student Editing Competition Award”.

Congratulations to the 2022 winner of the
ANNE V. COATES AWARD!

Students of film or editing may enter the ACE Student Editing Competition once a year. Applicants must provide the name of the school or university where they are studying and the name of a professor or instructor on the ACE application.  Here are the steps:

The top three finalists are contacted by phone and email, and announced soon after.  Each finalist is invited to attend the ACE Eddie Awards.
`
The winner receives a special Student Award and publicity in the Hollywood trade papers and each finalist receives a plaque.
`
No other entrants are contacted and no critiques or rankings are available for anyone. The finalists are listed on this ACE website.
~

Please Note: The dailies supplied are for this student competition only and are NOT to be duplicated or copied or used for classroom study, projects or any other outside use. Any infringement upon this use may result in litigation. (When the awards are held in person again ACE does not pay transportation or hotel expenses for out-of-town students.)