How Editing is a 3-Dimensional (3D) Art
by Kiran Ganti

3D means three-dimensions, i.e. depth (or length), width (or breadth), and height. The screens on which we see movies are 2D. They have width and height, no depth. The only time audience experience 3D is when they see movies wearing 3D glasses. Some cinematographers light and shoot the scenes in such a way that in their frame, not only space in width and height is explored but also one can see “depth”. This is their effort to break the 2D nature of the frame. But cinematography is only restricted to the visual.

Cinema is made up of twins, Audio and Visuals. Editing explores the other twin also. One of the key aspects of cinema is exploring space and time. And editing is the place where both can be changed, manipulated, juxtaposed either independently or collectively. By exploring space in time and by using audio and images, editors are creating a third dimension to their art and craft, which is beyond the normal definition of 3D. Let me break it down by each dimension. In an edit timeline, there is the Video layer (or tracks) and the Audio layer. One can have as many layers for video and audio. It is with these audio and video layers that editors create the third dimension. 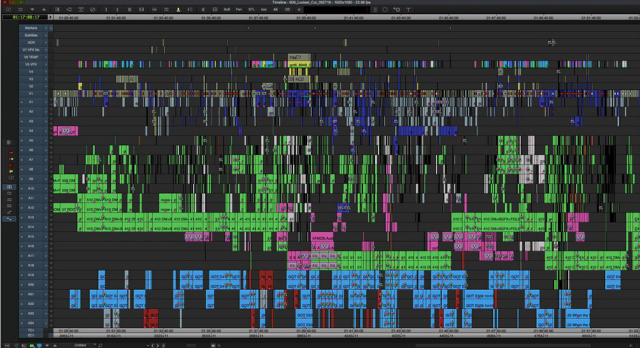 Depth (or Length) – In the Video layer, all the visuals for the scene are arranged. All the aspects of 3D that the cinematographer has shot are there for the editor to consider while editing. An editor “looks into the frame” and this is depth. He/She reads the shot; looks at the actor’s performance, the space they inhabit and the way the space has been lit. An actor’s close up would reveal the inner thoughts or emotions of the character. Their dialogue could reveal a new layer. This depth or insight into the character is explored by the editor by deciding of the placement, duration of the visual and also through the audio.

Width– The timeline of the edit is the width. For a movie which is of 2 hours duration, the rough cut can be anywhere between 3:30 hours to 2:45 hours. During the final cut, the editor gets the duration down to the required time. This is achieved by removing scenes, inserting shots between scenes, which give new meaning to the scenes, changing the position of the scenes in the timeline etc. So a timeline is constantly changing. In all other aspects of post-production, the time is fixed. A constantly changing width, or time, is only found in editing.

Height– There are multiple tracks for the audio. Other than the dialogue, there will be sound effects, background score (either temporary score that the editor has put in or the one that the music director has created) etc. If the dialogues are placed in A1&2 tracks, sound effects in A3&4 and background music in A5&6, the editor is dealing with 3 different audio parts. These three parts are sometimes complementing and at other times colliding with one another. Given the complexity of the scene, the number of tracks in the audio layer can increase, their volume adjusted, the dialogues overlapped. Any editor sometimes use as many as 30 layers. So the editor is constantly dealing with height, especially through the audio tracks.

Editing is a 3D art. I think that while editing, Cinema is explored in all the 3-Dimensions in its purest form. We need to look at 3D in a new way.

01.06.2021 , CinemaEditor Magazine, Movies, Technology
This content is for members only

14.02.2021 , CinemaEditor Magazine, Technology
This content is for members only

04.12.2020 , About ACE, EditFest, Technology
This content is for members only
Show more