— From The Vault – Stephen Mirrione, ACE

01.06.2021 , CinemaEditor Magazine, Movies, Technology
This content is for members only

01.06.2021 , CE Features, CinemaEditor Magazine, Movies
This content is for members only 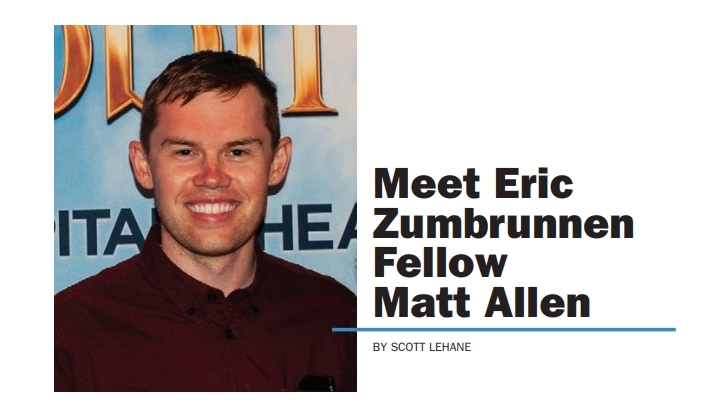 Matt Allen has been named this year’s Eric Zumbrunnen Fellow. The 27-year-old native of San Diego currently serves as the second assistant editor on the Netflix feature film Sweet Girl, starring Jason Momoa, working alongside editor Matt Chessé, ACE. He previously assisted Chessé on Disney’s Christopher Robin, and served as an assistant editor with Jim May, ACE, on the recently released Bloodshot.

A MESSAGE FROM THE BOARD

The Fellowship is designed to offer mentoring and technical development to a promising assistant editor currently working toward the editor’s chair. It was set up to honor the late editor Eric Zumbrunnen, ACE, (a.k.a. ‘EZ’), who passed away in 2017 at the age of 52 after a long battle with cancer.

The Eddie Award-winning editor was known for his workwith Spike Jonze on such films as Being John Malkovich (1999), Her (2013) and Adaptation (2002) as well as John Carter for director Andrew Stanton. He also cut music videos, commercials, documentaries and shorts for clients such as Nike, Xbox and Apple. Allen said he was “absolutely excited” when he found out he had been selected, noting that applicants go through a rigorous selection process by the EZ Fellowship board, which includes many of Zumbrunnen’s collaborators like Jonze and Vincent Landay.”

“It’s been a really a game-changing opportunity and yeah, it’s been wonderful, even during the pandemic,” he says. “A lot of the ACE members have really been generous with their time, as well as the Zumbrunnen family and a lot of Eric’s collaborators.”

While the Fellowship includes some great perks like an ACE Associate membership, software licenses and training, as well as a new MacBook Pro laptop, Allen was most excited about the mentorship and networking opportunities that it opened up.

“My mentorship and networking opportunities to grow as an editor have exploded overnight. The mentorship I received over the past several weeks with top editorial craftsmen and women would have taken me years instead of months to have.”

Allen explains that on his current project, Sweet Girl, the editorial department is collaborating remotely using Evercast.  Through the Fellowship, he was able to talk to editor and Evercast co-founder Roger Barton, ACE, about the system. Additionally, Allen thanks Tom Cross, ACE; Kevin Tent, ACE; Sarah Flack, ACE; Elliot Graham, ACE; and Debbie Berman, ACE; who have been especially generous with their time mentoring him about the craft of editing over video chats during the pandemic.

He’s also thankful to the EZ Fellowship board of directors, ACE, Jenni McCormick and Suzanne Zumbrunnen. “They have all worked tirelessly to provide opportunities, even when we have all been stuck at home. I am really looking forward to being able to meet in person again.”

His long-term goal is to be a feature film editor. “I’m interested in telling character-driven stories that really connect with audiences. Movies that educate, entertain and step into a character’s shoes for two hours. I also want to become a full member of ACE and have a movie I edit play Sundance and the Cannes Film Festival. I’m really interested in doing music videos and commercials in between feature film gigs as well.”