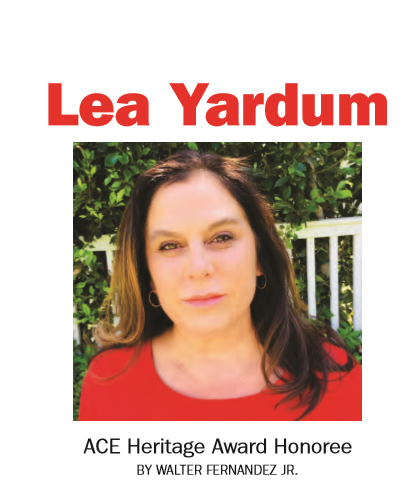 Lea Yardum has been a reliable constant for American Cinema Editors for over two decades. Her beginnings with legendary publicist Murray Weissman cemented her metier in entertainment and she’s been on an upward trajectory ever since.

Last June, ACE presented her with a Heritage Award for her tireless work in keeping editing on the Hollywood radar and being just an all-around amazing ally of the honorary society. “I immediately took to the account,” recalls Yardum. “The ACE Eddie Awards were one of our clients.

When I ended up leaving Murray to start my own thing, ACE decided to stay with me because I had been their account rep. It was one of my favorites.” Yardum admits, “While it was very interesting to me, I didn’t know that much about editing at the time. I didn’t understand the storytelling aspect of it.

Back then, ACE had a PR committee, which they are now reviving, and Janet Ashikaga, ACE, was on that committee. I asked her, ‘I want to be able to share with journalists what editing means in a really easy way – sort of an elevator pitch.’ Janet said, ‘The best way to tell you is to show you.’ She invited me into the editing room and she showed me what she does. It was an aha moment. I realized in that moment, the technology was a secondary tool that you use to get there, which seems so obvious now.

If you’ve never been to film school or been in an editing room, it feels like this giant machine that you push buttons on. I can learn how to push buttons, but Janet showed me it was about the nuance of storytelling. Not so much about what you cut, but when you cut or why you hold on something. The tone shifts with the slightest change. That was a huge moment for me. Nobody can really teach you how to do that. That’s the difference between learning how to type or being a writer.”

From that moment on, her mission was clear. She continues, “That’s the moment when it clicked to me what my job was and really ignited my passion for it. It can be a hard thing to explain to people so if you can make it easily digestible and relatable, then you avoid being repetitive or paying lip service. If you see it, you really understand. It is art. And it can be done well or poorly. That’s why everyone can’t be an editor.

I’ve always seen my job as illuminating for the average person what editing is. Not for other editors. I’m thinking, oh that agent or that executive is going to love to read about this and get it. Plus, the people were really nice and it was a lot of fun.”

Over the years, the relationship and the job have evolved and grown stronger. Even though Yardum has plenty of clients and was the awards-season expert for Paramount Pictures for a time, she has always made ACE one of her top priorities. “ACE is singularly the best partner you can have as a publicist.

The membership will send me reviews where the editing is often [mistakenly] credited to the director [e.g. timing, tone, montage]. I’ll then reach out to the journalists to discuss their piece. Many journalists have written me back and said thank you for pointing that out.

One of the most gratifying things I do is help out ACE with placing an obituary. I appreciate the opportunities to work with families to get their loved ones the recognition they deserve during such a difficult time. I call obit editors and advocate to the Academy that our editors are included in the Oscars® In Memoriam or the Emmys® In Memoriam. We don’t always win but I’m always thinking of a way to do that. I call film festivals to see if they would consider an editing award,” explains Yardum.

“My relationship with Jenni McCormick is also one of the main reasons why I love working with ACE so much. Jenni is just as active as I am. She has great instincts. Her knowledge stretches back so far and she’s like an encyclopedia of information on what’s in their archives and what we have available to us. I consider her a good friend,” relates Yardum.

Yardum made headlines herself in the spring of 2018 when she and colleague Gena Wilder left Paramount to start their own company, Perception PR. Headquartered in Burbank, Perception PR also has a New York satellite office where partner Julie Tustin takes lead on local clients like Late Night with Seth Meyers.

A year on, the three women have amassed a very impressive and growing roster of clients and staff. “Twenty years ago, there were probably three journalists that were interested in editing without having to beg,” confides Yardum. “Now there are over five times those who regularly cover ACE-related or editing-related news. It may not seem huge but that’s a big growth. I attribute that to the work that ACE and Perception have done together.

Some successes that really stand out include being an answer on Jeopardy!, having the Eddie nominees and winners published in the Los Angeles Times, and having the Invisible Art/Visible Artists event spotlighted on CBS Sunday Morning one year. We’re still changing the perception that an editor’s job falls into technology rather than filmmaking or storytelling.

It’s not easy for a non-profit organization to keep a publicist on board for over 20 years. I feel lucky every day of my life.