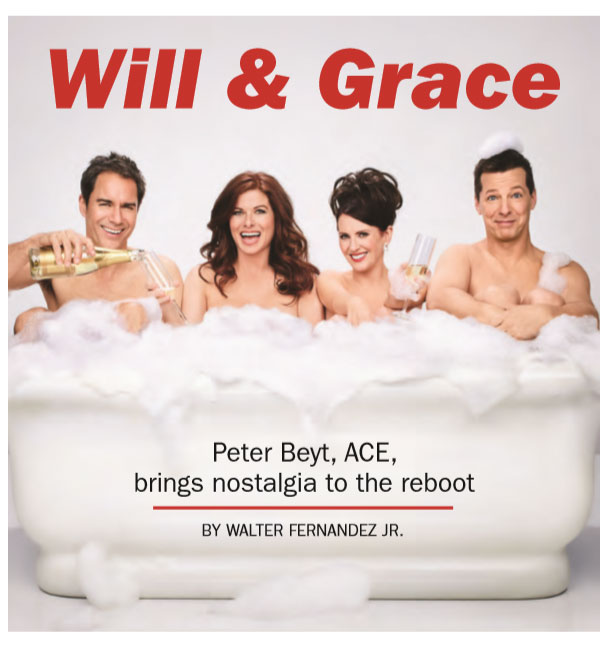 Will & Grace made a nostalgic re- turn to TV this year. The comedy series first aired just before the turn of the century and all the way to 2006. When it returned in 2017, it felt very much like the country needed Jack (Sean Hayes), Karen (Megan Mullally), and the eponymous duo (Eric McCormack and Debra Messing) back in our lives. “People want to watch ice cream,” says editor Peter D. Beyt, ACE. “Let’s all sit down and get that warm, family feeling. We’re comfort food.” Beyt is no stranger to editing essential TV that feels like a home-cooked meal.

He came to prominence as an editor on classic sitcom The Golden Girls after all. Beyt went to film school in Santa Barbara but was unsure in which direction to go career-wise. “I had a good professor who told me, ‘If you’re going to go to L.A. don’t go in as a PA or something like that. Learn a craft and go in there with your craft. I became an editor away from L.A. and it was my first job when I got here. Editing has been my bread and butter since 1987,” explains Beyt.

He cut his teeth at Editel, the former Hollywood post house, where he worked on commercials and music videos for the likes of Prince and Michael Jackson, to name a few. Around this time, he also made his first foray into the sitcom world. Beyt edited six episodes of Poison, a short-lived Showtime series for Imagine Entertainment. While the show didn’t have legs, it gave him his first big taste of storytelling. “That’s why I went to film school,” exclaims Beyt. “I’m a storyteller. I know I can do all the effects and stuff easily without blinking. The truth is I use it all for storytelling.”

Not even 25 and he was already working with some major players. He then moved to Witt/Thomas/Harris Productions to work on The Golden Girls. Already a bona fide hit for NBC, Beyt was given two weeks to prove his mettle. 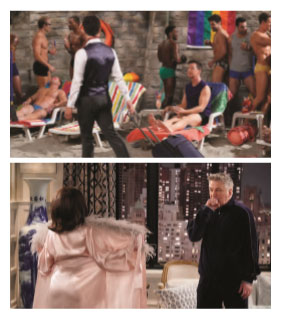 He succeeded and was kept on for the remainder of the run. He flourished during his time on The Golden Girls and directed his first episode of the show at 28. “I learned story and comedy at Witt/Thomas/Harris. As the technology got easier, I could focus on story so everything just fell together. Editing prepared me to be a proficient director and directing indelibly informed my editing,” recalls Beyt. “Now on Will & Grace, I’m doing a different level of editing. No longer do I have a mentor to honor or prove that I’m good. I’ve gone and let myself go. I just go for it.” Citing a recent episode of Will & Grace, titled “Who’s Your Daddy,” Beyt elaborates on how his editing process has evolved since Golden. “[In this episode,] Will gets picked up by a younger man (Ben Platt). The script actually starts at the gay bar first, and then we go back to the apartment with some discussion about what happened at the bar. Then, we go on with the story. Well, the discussion happens with the same people at the bar.

It kind of becomes redundant plus you’re opening the show in a bar instead of the familiar setting that you want everyone to identify and feel good about. We took the A scene at the bar and we used it as flashback in the B scene at the apartment, but in order for that to happen, someone had to be telling the story in the B scene what happened in the A scene. I took the A scene and digitally removed Grace from all the shots and had Jack tell the story to Grace as if she wasn’t there. That’s when the culmination of effects work and storytelling come together for me.” It’s this kind of flexibility with the narrative that only gives the editor and the editing process even more weight.” Beyt continues, “I’ve got four actors who are very accomplished and have really big personalities. I have a director (James Burrows) who is a really big personality.

I have some executive producers who have really big personalities managing a team of writers with very big personalities. Everybody is putting his or her best foot forward and everybody wants all kinds of things. What happens on the stage is not the finished product at all, like a regular sitcom.

I’m making a movie every episode.”

Beyt came of age in the business just as everything was about to go digital. He remembers, “By the time I started cutting sitcoms, I was using 3/4-inch playbacks and did all of the oldfashioned manual things. I’m a flatbed person. Moviolas were a little too antiquated for me. I tear film too easily. The management of all the leftover pieces makes you want to do it right the first time. I cut many pilots and shows that way. It was painful at first with the Avid, but it was better than 3/4 inch. You could sit there and look at performances. “Once a show was shot, we would select the performances because the process was too complicated down the line to not know what performances you wanted to use. Cueing up tapes, and evaluating performances was crazy. At Witt/Thomas/Harris,  we had a guy who would dub out all of the tapes over the weekend into reels and we would watch those. We would follow the script step by step [and] pick all of the best performances. Every take. The technical effort was enormous.” While the process may be easier than before, you’re still killing your babies sometimes. Beyt loved working with four actors who can give you a range of performances from take to take. 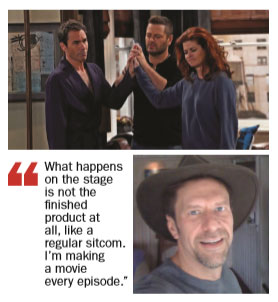 Take two might be a restrained coloring-within-the-lines type of performance while take five is an off-the-charts cartoonish exhibition. Beyt remembers a recent episode where Karen does a crazy dance. The effort to get it just right was so meticulous that Mullally emailed Beyt to make sure he left it in the final cut and to use the fourth take. Otherwise, she’d be very upset.

Sadly, the entire scene didn’t make the final cut not because it wasn’t glorious, but it didn’t work in the context of the story. “We’ve reinvented the wheel a couple of times in our creative process,” explains Beyt.

This process is made easier thanks to his crew. “You wouldn’t think so, but I have up to 60 effects shots per episode of Will & Grace. I have a good group around me right now that allow me to massage the performances and the story for the best possible results. I learned to be a polisher, a finisher, early on so I don’t like letting anything out the door that has a bump or a scratch on it. When I dump 60 effects shots on the team, they make it happen even when we have tight turnarounds.” This team includes assistants Joe Fulton and Levi Ogner, plus online with Andy Ralston and colorist Craig Budrick all under producer Bruce Alden. “In the end, it’s all about getting the performance and the story,” says Beyt. “I honor the script and the scriptwriter first.

Editors make the best directors because they know what they want. Coming from a director to an editor, you begin to realize the enormous weight of it all.” Beyt, who has edited some 50 pilots including Blossom, Less Than Perfect, Nurses and Rules of Engagement, sees only more interesting work ahead where he gets to play with the technology. He has always had a penchant for learning new tech, which was present even before his love of storytelling. While editing The Exes for TV Land, Beyt cut most of those episodes from his house.

After some 30 years and change in the industry, Beyt feels rejuvenated in his profession. “[Will & Grace] has given me everything that I needed that I didn’t know I needed,” he admits. There is a large section of the viewing audience that feels the exact same way.