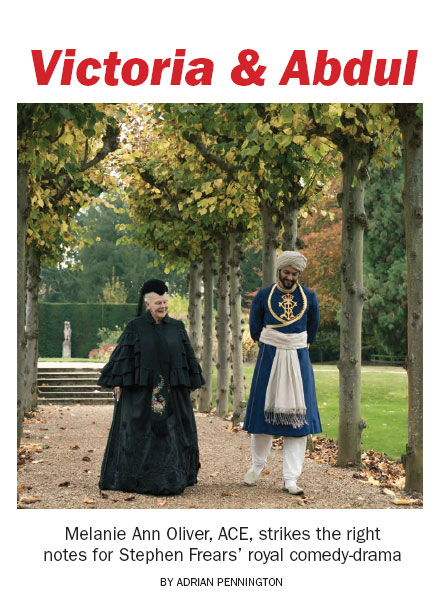 Victoria & Abdul follows the unconventional real-life friendship between the British Commonwealth’s Queen Victoria, played by Judi Dench; and an Indian clerk, Abdul Karim, played by Ali Fazal. Director Stephen Frears’ handsomely mounted comedy-drama for BBC Films and Working Title and distributed by Focus Features is a companion piece to the 1997 film, Mrs Brown, which was also about Victoria’s unlikely relationship with a servant and also starred Judi Dench as the daunting Monarch.

Based on the book by Shrabani Basu and scripted by Lee Hall, Victoria & Abdul has a cast that also includes Michael Gambon, Olivia Williams, Eddie Izzard and the late Tim Pigott-Smith. Working with Frears for the first time was Melanie Ann Oliver, ACE (Les Miserables, Pride, The Danish Girl, Bridget Jones’s Baby).

She joined the project once principal photography was underway with director of photography Danny Cohen, BSC, in the Highlands of Scotland. “Mobile phone reception was near impossible in some of these remote areas, so we only caught up in that first week after the initial batch of rushes had come through and he came into mobile range,” recalls Oliver, who was based in London. “One of the absolute joys of this film, is that nearly all of the scenes are shot on location, like Osborne House (Queen Victoria’s summer residence on the Isle of Wight) and Agra in India – although this also proved a touch difficult with communication.”

Admitting to being in awe of Frears at first (because of his body of work which includes Dangerous Liaisons and The Queen), Oliver says there was no time to be shy. “I had to get over that quite quickly, because Stephen throws you in at the deep end and expects you to take the lead. He’s incredibly open but likes the challenge of discovery as opposed to any imposed idea of what the film might be.” On receiving the dailies, Oliver would very quickly assemble the scenes to know if anything had been missed or the pitch of the scene wasn’t quite right. “Then, slowly, I would build up the tree with sound and music and I’d start to interweave the scenes by script order and my own ideas,” she says. “I don’t like to edit dialogue too much because the assembly is this wonderful toolbox of treasures. It needs to be robust. I often return to my first cuts time and time again during the editing stage, and many of these cuts end up making their way back into the main film. I work very hard in the shooting period to explore all avenues in case the emotional pitch has to change.

It’s about being thorough so I know where the bodies are buried – if things need to shift pace or to adjust for the story. “Stephen doesn’t watch cuts or rushes during the shoot –he remembers everything – so his main question at the end of any day was always, ‘Did I get the scene?, Or did I miss a shot?,’” she says. “I realized the comedy was paramount to him and the ludicrousness of this mad world of Queen Victoria and her household.

From very early on, in the read-throughs, I could see the brilliance of his casting and what each character would bring to the ensemble script.” Oliver had had the pleasure of cutting Dench in Jane Eyre (2011) as Mrs. Fairfax. “Judy is truly magnificent and any filmmaker should watch her rushes intently because they are mind blowingly good,” she says. “The force of her intelligence and humor is simply beyond words because it all happens within a blink of an eye. A sweet smile of flirtatiousness can instantly turn to pearls of steel. She only gives away what she wants and always in her very own timing which is impeccable.” Arguably the hardest aspect of telling this story lay in documenting a controversial ‘hidden’ tale about the British royal family, layered with racial overtones and comedy.

“This film has a very current political feeling about it, in terms of Brexit and why people possibly voted like they did,” Oliver says. “But ostensibly it’s about an isolated woman of great power who meets an everyman and how he brings light to her weary world of protocol. I saw it as a love story, with some very big themes, which have haunted the lives of royals.” She elaborates, “Abdul’s sense of ‘being’ is very different to that of the Queen’s household. This foreign intruder threatens them.

But there’s a twist in that Stephen [Frears] and Lee Hall have cleverly taken that core story and added a strong sense of the ridiculousness and the absurdity of royal life. I knew very early on we always had to protect the comedy and the drama and make it a virtue.” Frears was keen to show the film in various stages of the edit and to test people’s reactions to the film. “He’s very open and curious to know how the film is fleshing out,” says Oliver. “On the whole, Lee’s script was very tight and had a strong musicality where the dialogueflowed effortlessly. However, I’d say the most challenging area was towards the end where the dialogue became much sparser and more about the consequences of power. We had to find the balance of sound and music to take us through this section.

“The film is complicated because it starts off in one tone and finishes somewhere else and I felt it was very important to protect both and keep it emotionally true.” Oliver worked heavily with music and sound right from the get-go. “I often find that if a scene is tricky to score this is often a telltale sign that something is amiss and needs to be worked,” she says. “Once [composer] Thomas Newman came on board, the film took on another color and really started to bloom.

His reading of the film was beautiful and we reworked scenes as a result. I learned a lot from his process and the way he layers and sweetens his music.” Oliver’s assistants “who are basically both firsts in their own right” were Jeanna Mortimer and Ryan Colligan. “Jeanna was my ‘go-to person’ for VFX, logistics within the editing department, and for testing out any comedic scenes. She was tough and always pointed me in the right direction. Then I had Ryan, who I’d worked with on commercials and he did brilliant sound work, and helped me find the palette of music, which was tricky because of the tonality of the film. He was very patient with me as I found another soundscape to explore or a piece of music to rejig. “We were a very tight-knit team and one could never do these jobs without their total commitment.”