How To Train Your Dragon: Hidden World 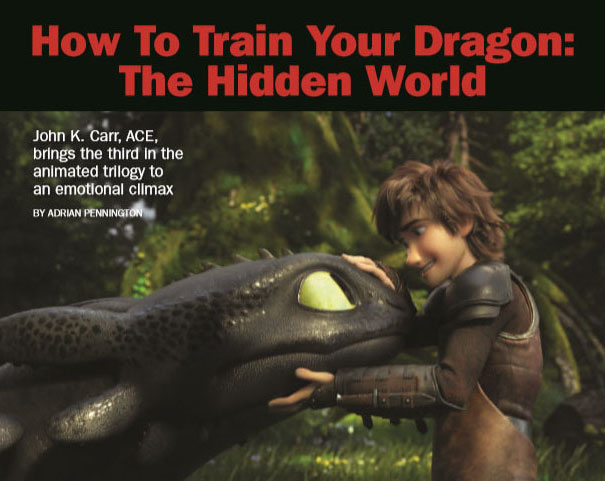 Produced by DreamWorks Animation, How to Train Your Dragon: The Hidden World concludes the trilogy started with 2010’s How to Train Your Dragon. The film picks up where the second (2014) film dropped off, with Hiccup, now the chief of Berk, having fulfilled his dream of creating a peaceful dragon utopia. It’s not long before danger threatens their village, notably in the form of a dragon slayer called Grimmel, who hunts Toothless, Hiccup’s lovable Night Fury companion. The duo must embark on a perilous quest to a world thought only to exist in myth to save both dragon and humankind. Director Dean DeBlois takes the reigns again as writer and director. Also returning is John K. Carr, ACE, an additional editor on the original, and editor on HTTYD2.

Carr says the production originally targeted for release in 2016, “however, about a year towards the end of D2 the studio had Dean write a new ending which completely changed the story for D3. So, in the summer of 2014, after the release of D2,

Dean conceived and wrote a whole new story for D3 minus the ending. “Something we didn’t fully realize until a research panel was put together after the release of Dragon 2, was how much the audience loved all the dragons,” the editor says.“There is a scene in Dragon 2 where two gigantic dragons, called Bewilderbeasts, are engaged in a fight to become the sole alpha dragon; much like two male lions fighting to become the leader of their pride. When the benevolent Bewilderbeast is killed by its evil rival, the recruited panel vocalized how upset they were with the outcome of that particular scene.

So, what we learned was there are a lot of animal lovers out there, and even though the movie is animated, and the dragons are mythical … don’t kill a dragon.” 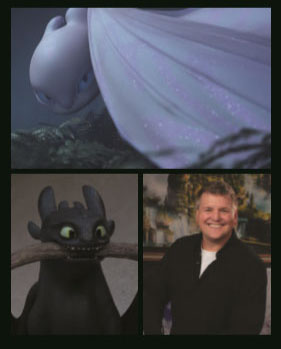 The third in the trilogy marks a shift in tone from the first movie, with the stakes heightened, to match the growing maturity of the characters. “The challenge was to create fun character moments that paid homage to the previous two movies, but be fresh in [their] content,” says Carr. “The scene of Toothless courting [his love interest] the Light Fury was a fresh take on the moment where Hiccup first tried to befriend Toothless.

The trilogy has been so well crafted by Dean, that to push the characters in a different and new direction was always the intent, and necessary for the story, and character development as a whole.” Carr explains that his main thought when cutting a scene together is finding ‘point of view.’ “Whose point of view is it, and what is the story that needs to be conveyed to the audience through that character’s POV?” For example, a scene where Tuffnut tells Hiccup about what he needs to do to be a worthy man so [Hiccup’s girlfriend] Astrid will consider marrying him is a comedic one, Carr explains. Tuffnut is doing 99 percent of the talking, but Hiccup is on a completely different mission where he is trying to find out more information about the Light Fury, and makes a shocking discovery. “It was one
of those fun, challenging and cleverly-written scenes where you have to decide what funny lines we need to be focused on Tuffnut, for maximum comedic value, and what lines could we still get the same comedic laugh from, even though the camera is on Hiccup.” 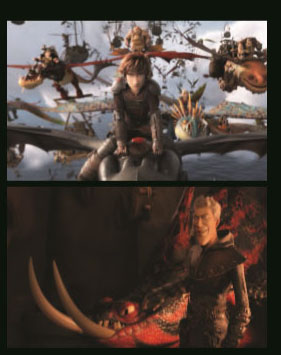 The quest begins in the first scene in the second act but after a test screening some viewers felt the second act was a little too long. Editorial was also tasked with trimming six minutes out of the movie for budgetary reasons. Carr explains, “All the original sequences are still in the movie, they’ve just been trimmed a little, and rearranged. It starts the same way with Hiccup leading the Vikings and dragons away from their island of Berk, and following them along their journey until they stop and set up a temporary camp on a new island.

Then we cut to our villain, Grimmel, back on Berk discovering Hiccup and the Vikings are gone. I pitched to Dean the idea to intercut Grimmel in the middle of Hiccup and the Vikings leaving Berk, and landing on the temporary island. He gave me the okay to try it, but because we were in a production crunch working on other sequences, I tasked [associate editor] Mary Blee with cutting what I pitched to Dean. “I don’t think I could have cut it any better; she did an amazing job. I had her cut back in a couple of dialogue exchanges I thought Dean would miss, and we showed it to him. By intercutting Grimmel into Hiccup’s journey, Grimmel was no longer recapping for the audience what they’d already witnessed happen. 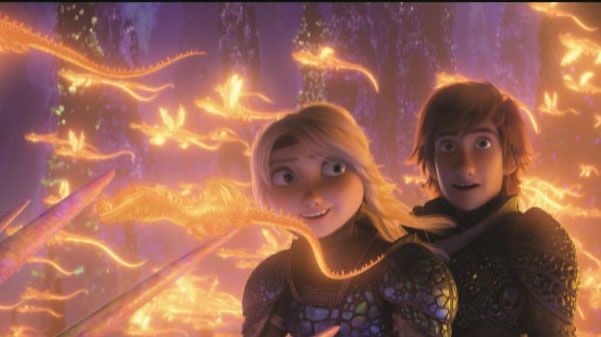 Instead, Grimmel became the author to what the audience was witnessing, and thus made him look smart, and that he was the orchestrator to everything Hiccup was doing.” He adds, “We wound up cutting close to two minutes out of the total time from the old cut to the revised version, and it made our villain smarter. I’m very proud of the way it turned out, and a great deal of credit goes to Mary.”

The scene during which Hiccup says a final goodbye to Toothless, as the dragon embarks on a new life, was challenging because of its emotional impact on not only the movie, but the trilogy as a whole. “Everything has come down to this moment, and because of its emotional potential, several people had various opinions how it should be, what should be said, and how much of what is said should be conveyed through dialogue or pantomime,” says Carr.

“The solution came when [composer] John Powell watched the latest version that Dean and I worked on, and after watching the whole movie without music, John said that he loved the movie, and the goodbye moment was perfect.” The voice cast includes F. Murray Abraham (Grimmel), Cate Blanchett (Hiccup’s mother, Valka), Jonah Hill, Kristen Wiig and Kit Harington. “If there was a funny ad-lib that was recorded, I would ask for a few more takes, just so we had it covered,” says Carr.

“Occasionally I’d hear something in line delivery that would spark an idea, and I’d ask Dean, based on what I heard, whether we could try an additional line, or phrase the line differently with an alternate delivery. “We had a library of Toothless and Dragon vocals from the other two movies to provide a personality of the dragons for the animators to animate to, he adds, saying that the most challenging sound was the Light Fury as Randy Thom – the sound designer on the first two films, who provided vocalizations used for Toothless – wasn’t available to lend his voice talents, as he was working on another film.

Carr and associate editor Mark Hester “listened to various animal sound effects, ranging from a pig, alligator and various animals from the cat family to create this.” Carr’s editorial family also included assistants Shane Glick, Natalia Cronembold and Vicki Hiatt who assisted with the music editing in prep for screenings.

“Their contributions to the movie were invaluable,” says Carr. “It was important to me that each person cut a scene, so they could watch the final product and feel special about their contribution. To have been able to contribute along with so many creative and talented people on not only a successful movie, but a beloved franchise that has endeared the hearts of so many people – and hopefully the hearts of generations to come – is humbling.”