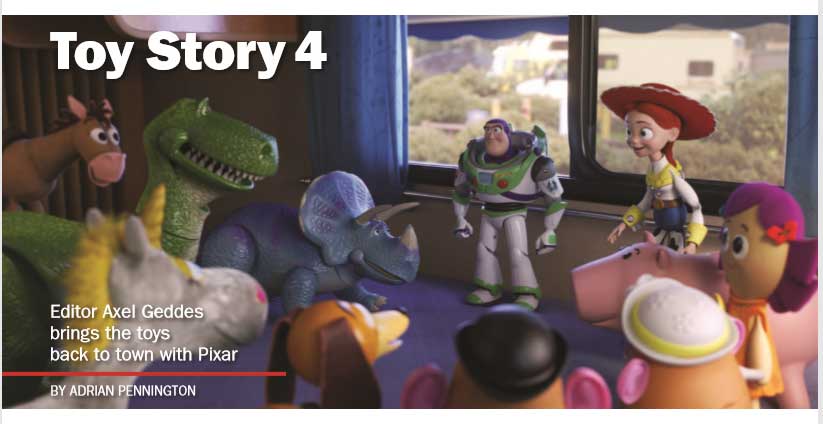 For a long time even Pixar Animation Studios’ ‘Brain Trust’ felt 2010’s Toy Story 3 ended Woody and Buzz’s story with Andy so perfectly that they never even talked about doing a follow-up. But the demand to continue one of the most successful animation franchises in movie history was just too great to ignore.

The last installment ended with the toys’ longtime owner, Andy, passing his beloved friends to young Bonnie before heading off to college. Toy Story 4 picks this up and has Woody (Tom Hanks) and Buzz (Tim Allen) meet Forky (Tony Hale), a spork that has been made into a toy by Bonnie (Madeleine McGraw). Forky suffers from an existential crisis about being a toy, while Woody and friends try to help him understand how to be a toy.

As Bonnie and her family go on a road trip, Forky escapes and Woody goes to save him. Editor Axel Geddes joined the project in 2016. “When they introduced new character Forky was about the time I started working on it and this new character dynamic was the catalyst for the story,” he explains. “Pretty soon I’d brought a rough assembly to the brain trust and by spring 2018 we had a version that, outside of the third act which we continued to rewrite and tweak until the end of the year, stayed pretty true to the final version.”

Geddes was not unfamiliar with the core characters, having worked with Lee Unkrich on Toy Story 2 as additional assistant, and edited several Toy Story shorts including Toy Story of Terror! (2013). He was also 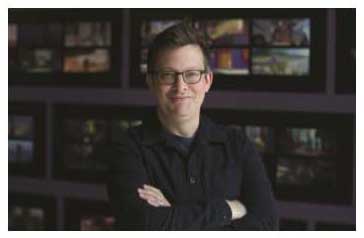 “We always wanted to stay true to the Toy Story universe and at the same time to widen the perspective slightly,” he continues. “The cinematic grammar of our approach doesn’t change but we do have our first Toy Story told in CinemaScope which meant some adjustments to how we use close-ups, for example, but hopefully not so that the audience will notice.” Josh Cooley – story supervisor on Inside Out, storyboard artist for Brave and additional story supervisor on Cars 2 – directed.

One scene, which begins in act two, proves critical for setting the tone of the film. “Woody becomes separated from the group near a small town and he goes into the town’s antique shop to see who he can find in there,” Geddes says. “It’s a little creepy and dusty, a forgotten land, and there’s this almost Norma Desmond-like quality to this new character we meet in this scene. When we first screened this in December, 2016, I remember Andrew saying that this is the moment that captures what Toy Story 4 is about.

“The new character, Gabby Gabby (Christina Hendricks), has spent most of her life never being played with but we knew that we had the four main protagonists for our story. [In addition to Woody, they are] Gabby Gabby, who wants what Woody has; Forky, who doesn’t want what Woody has; and Bo Peep, who shows Woody a new perspective.” He continues, “We knew the introductory scene with Gabby Gabby was important but we didn’t fix on its place in the story timeline or on Woody’s motivation for going into the antique store for some time.

In many ways, this was the most challenging single sequence editorially. It was one of those where we kept trying different things. Should the store interior resemble a little city? Should the toys come out of hiding like Al’s toy barn in Toy Story 2? We felt we kept on breaking the truth of the world. 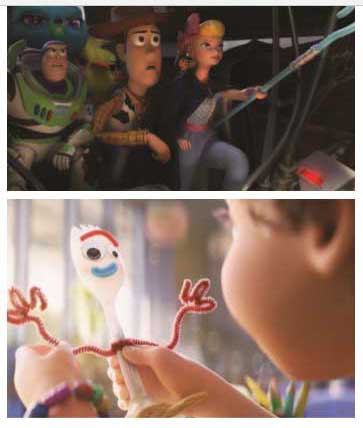 Finally, we realized that the promise of Bo’s lamp in the window was a great impetus for Woody to enter the store and thus be introduced to the antagonist.” Sadly, actor Don Rickles had passed during the making of the film but those who handled his estate were keen for Disney to continue with giving Mr. Potato Head a full role in the film. “I knew where all the archive material was of his previous voice performances from the films and shorts and also video games and theme parks.

So, I was able to use a lot of that in the final film to honor his legacy.” Keanu Reeves also lent his vocal talent to the show as new character Duke Caboom. “He liked the idea of playing a toy and was really keen to explore what it would be like to see the world from a toy’s perspective. He had this idea that Duke Caboom would be sold in a box with the character depicted in various action poses and that the character would always be doing those poses in an effort to be a desirable play thing. In order to show that, he jumped a table in our atrium to do those poses. He was a lot of fun to work with. He pitched so much material.”

In animation production, editorial has a unique role in that prepro, production and post are effectively simultaneous processes. He explains that the Camera and Staging department will be inspired by the storyboards, but won’t always literally put the camera where the storyboards indicated. “With a special emphasis on reinforcing the clarity of the storytelling, Camera will explore alternative ideas. Maybe a different camera move, maybe a combination of shots to simplify the beat.

Edit will put together a first cut and then call the DP [Patrick Lin] and camera operator[s] for the scene [Derek Williams, Jahkeeli Garnett and Andrea Goh] and review the cut together. Edit will make some requests of shots or a new blocking they would like. Camera will make some requests of shots that they would prefer to be in the cut. The two departments will collaborate to come up with a version of the scene that they both like and then play it for the director.

When the director sees it, inspired by this new version of the scene, they will then start a new round of notes. We will do this process three or four times before locking the scene for animation.” Which is how they ended up with a four-to-one shooting ratio for the scene, “Meet Gabby Gabby.” “Story is where the film exists in theory, editorial is where it exists in reality,” he adds. “I’d always show Josh all the material I had for a scene. I’d maybe show him the five-minute version knowing I’d have to cut it back to three minutes to get to the truth of the scene and I’d also have a three-minute version ready to show him.

“Unlike live action, we are not hidebound by having visual and audio tied to each other. If I like the first and second halves of different takes we can do that. Sometimes I will grab a piece of dialogue from a completely different scene if I need it as glue to get from point A to B. “Our voice talent, particularly Jordan Peele and Keegan Michael Key, gave us many more jokes than we could use so I put together a bin of gags just in case we need to call on one to make a scene complete.”

Geddes’ editorial team was made up of second film editors Torbin Bullock and Greg Snyder; his first assistant and ‘righthand man,’ Noah Newman; second assistants Kendra Juul, Jeff Stone and Chloe Kloezeman; and ‘indispensable’ production staff, coordinator Wendy Sekimura and manager Piper Freeman. “It’s a big team and each one covers different duties,” Geddes says. “From the assistants covering recording sessions to the [production] staff keeping us all on track. We are pre-production, production and post all rolled into one.”