The Shape of Water

Guillermo del Toro has few peers in his ability to switch between drama, fantasy, horror and even science fiction – often in the same film. It was only natural that the director of Pan’s Labyrinth, Pacific Rim and Crimson Peak would be drawn to a love story between a lonely cleaning lady and amphibious creature being held for study at a government research facility.

This basic outline was suggested to del Toro by Daniel Kraus, his co-writer on the Trollhunters novels, and turned into a screenplay for Fox Searchlight Pictures by Vanessa Taylor and del Toro.

This otherworldly fairy-tale is set against the backdrop of Cold War-era America circa 1962. In the hidden high-security government laboratory where she works, Elisa (Sally Hawkins) has her life changed when she and co-worker Zelda (Octavia Spencer) discover the creature (played by Doug Jones in a practical creature costume digitally augmented by Torontobased visual effects company Mr. X).

On board to edit was Sidney Wolinsky, ACE, an Emmy®-winning editor with credits including Miami Vice, The Sopranos, and House of Cards and who also cut the pilot episode of The Strain directed by del Toro for the series which he created. Wolinsky cut the film entirely in Toronto.

In the story, Elisa is mute and the creature doesn’t speak, so much had to be conveyed through body language and expressions. “You just understood what the scene was about and often what the major emotions were,” Wolinsky says. “Doug Jones conveyed a lot and really created a character. Sally Hawkins gave an amaz- ingly nuanced and powerful performance despite only having sign language. “In the scene where she urges Giles [her neighbor, played by Richard Jenkins] to help her save the creature, her performance couldn’t have been stronger had she spoken the lines. I was blown away when I saw the dailies on this scene. We never feel her character is at a loss for words despite her having none.

For this reason, cutting dialogue scenes with Elisa could be approached as another dialogue scene, deciding which character you want to be on for a line whether the line is coming out of lips or hands. In fact, we put the subtitles for the sign language close to the hands – essentially near the center of the frame – so your eye would not have to leave the character’s face to read them. Although the scenes with Elisa and the creature together are frequently told from Elisa’s point of view both Sally Hawkins and Doug Jones give such strong performances that as in the dialogue scenes, editing decisions are not compromised by the lack of language but rather editing choices can be made based on where you want to be in any part of the scene.”

The creature’s otherworldly ‘voice’ was created by supervising sound editor Nathan Robitaille in collaboration with del Toro. “He took months to develop the creature’s vocabulary processing combining multiple sources, including his own voice; he would periodically play [versions of the voice] for Guillermo to get his feedback, and would make adjustments. Little by little it evolved to the point where the creature could express a wide range of emotions. Nathan and [dialogue and ADR editor] Nelson Ferreira designed all of the sound and Guillermo was specific about the things he wanted. 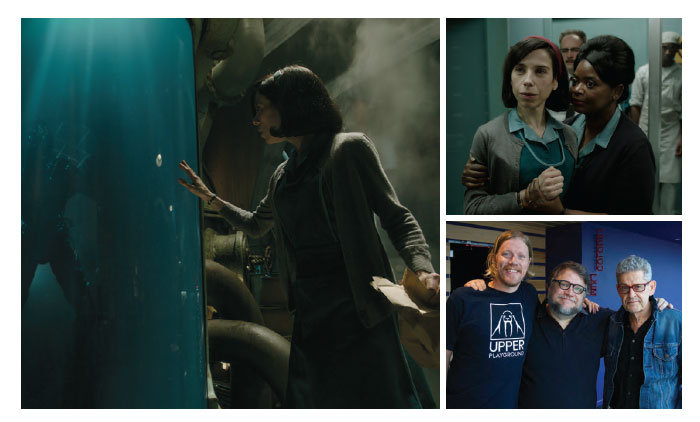 Wolinsky also had to balance five storylines. Along with Elisa, the creature and Zelda, there’s sadistic government agent, Richard Strickland (Michael Shannon) determined to please his military superiors, and a man of science with divided loyalties, Dr. Robert Hoffstetler (Michael Stuhlbarg). “Multiple points of view needed to be presented,” Wolinsky explains. “The challenge is you want to make sure the audience follows the story but you want to be a little ahead of them so they are discovering it as well.

You want to get out of a scene when you’ve made your point and get into the next one when it’s getting interesting. At the same time, you want to dwell on the characters long enough so you care about them and their challenges. The foundation of everything is the script and the casting. In both cases this film started with a really solid foundation. The challenge for the editor is to help build on that foundation and not screw it up.

In the escape sequence, in which Elisa and Giles conspire to spirit the creature out of the research facility, all of these characters and their stories collide. This six-minute sequence was the most challenging in terms of following each character’s story, making sure the audience knows what’s going on, keeping up the pace and sustaining the tension.” A favorite sequence is a love scene that takes place with a bathroom being flooded and water leaking into the movie theater located beneath. “It was a bizarre little sequence,” chuckles Wolinsky. “They shot that in pieces so there were times when I didn’t have everything. They created that huge wall of water coming out of the bathroom as a visual effect.

You have to have faith that the visual effects will work and what was being done turned out to be exemplary. Guillermo has a tremendous eye and imagination for knowing what can be done. That shot might have gone through three to six iterations before they did the final one.” There are some poetic water transitions in the film. “Some were designed during shooting. I’m thinking of the transition starting on a close up of Michael Shannon’s face sitting in the Cadillac which racks focus to the rain on the windshield in the foreground and dissolves into the water in the bathtub.

Another carefully-planned transition is from Elisa in the bus which racks from her face to the water drops on the bus window and the drops turn into an abstract dance of colored drops – the end being a visual effects shot. Some of the others, which are more oblique, like the one where Strickland finds the creature’s tank is empty to the creature getting into Elisa’s bathtub, were discovered in the editing process.”

Members of the editorial team include associate editor Cam McLauchlin and second assistant Mary Juric. “Cam was on the project for the whole time,” says Wolinsky. “Among his many responsibilities were finding the temp music and designing the temp titles. Guillermo liked the titles so much that after rendering them in [Adobe] After Effects they were used in the final film and [McLauchlin] was given credit as title designer. Mary was on from the beginning of production until a couple of weeks after the end of shooting and one of her major tasks was to set up the film with [Avid tool] ScriptSync; she also handled a lot of the temp visual effects and created most of the subtitles which also ended up in the final.”