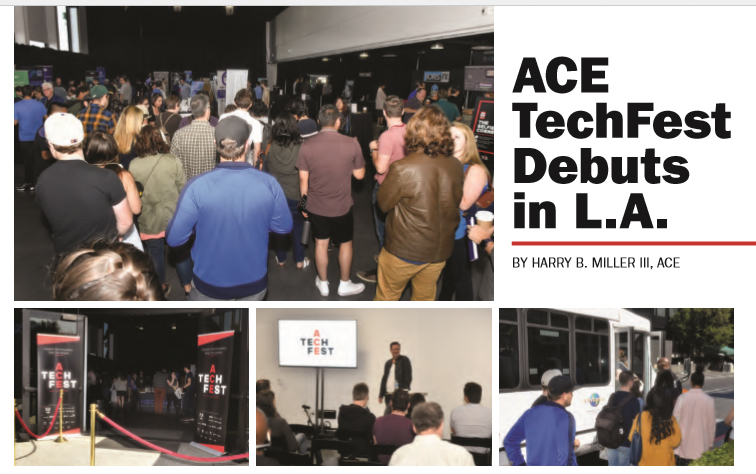 If you want to be dazzled/blown away by the developments in editing technology, you need to go to the next ACE TechFest. It is nerd heaven. And it is a glimpse into the not-distant future. The debut ACE TechFest was held June 8 on a brilliant sunny day at Universal Studios.

Those cool summer days are the perfect ones to spend inside, as we editors do, for four hours seeing the best editing software and lots of other fun stuff. It was an event filled with interesting equipment, software and fascinating presentations. And, if desired, a foot massage.

Jason Ballantine, ACE, wrote, “TechFest was terrific! It was so convenient to visit all vendors of interest in one easy to access point. The seminars were very informative and your generously provided food and drink trucks [were] yummy.” The main hall was filled with all the participating vendors.

Sort of fitting into that last category was Optimize Yourself from Zack Arnold, ACE, featuring products for a healthier work environment including chairs and standing desks. Also, Universal Studios had a sign-in sheet for those who wanted to tour the studio’s post facilities; Mary Poplin of Boris FX demonstrated their latest software (Sapphire, mocha Pro, Continuum Complete). AJA featured the Io 4K Plus for ingesting media and connecting your NLE to a display.

Master the Workflow had a booth for assistant editor classes. The Motion Picture Editors Guild had a display. Special mention goes to G-Technology, which sponsored lunch for the event and Filmtools was onsite and handed out hard drives to raffle winners.

Adobe showed the latest version of Premiere Pro to two audiences of about 80 attendees each. Although Mike Kanfer, Adobe’s Manager of Strategic Development, said that the latest release was mostly for performance gains rather than features, the demo featured a lot of terrific new features.

He also pointed out that Adobe has a facility in Santa Monica where they offer free training to ACE members. Yes: free. There is also a direct email for ACE members to ask questions. The email is available from the ACE office. There are online tutorials available at adobe.ly/cuttingrooms. 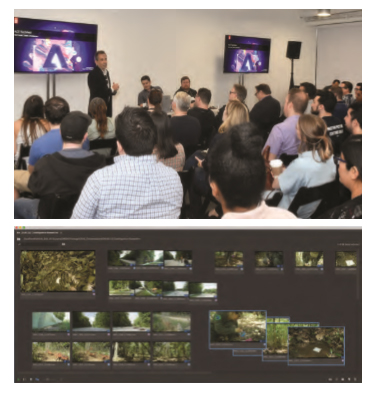 Finally, within the Premiere Pro application is a ‘Provide Feedback’ selection in the Help menu. This is an Adobe feedback page, where new features can be suggested and voted on.

Two presenters, Karl Soule and Matt Christensen, then showed some of the newest features in Premiere Pro: ‘pancake’ style editorial where two timelines can be displayed at once, including the source timeline for editing from one sequence into another; the ability to make sub-sequences of a main sequence; a new View menu to allow for on-screen rulers and grids for working with titles and graphics.

Next, they demonstrated how editors can share projects, with the ability to lock bins. For the first time editors on Premiere can work on the same project at the same time. This has been an essential need on episodic or feature projects which have multiple editors and assistants.

Also in the mix were Adobe Sensei, their version of artificial intelligence and machine learning, and new color, graphics and sound panels or workspaces. The most impressive new feature is a bin view called Freeform. Each bin with clips can be displayed in a list, thumbnail or this new Freeform view. Not only can clips be arranged in any position on the screen within a bin, but each clip can be separate sizes (four in all). In addition, there is a hover-scrub feature available, and if clips are stacked, hovering over the stack can reveal the underlying clips. And each layout can be saved and recalled. This is a fantastic and unique innovation.

Next to present was Blackmagic. Resolve is the free (for projects no larger than HD or 1920) software primarily known for color grading, that also has editing, sound editing, and visualeffects workspaces. Senior director of marketing Paul Saccone led the presentation as three gentlemen operated three networked workstations running Resolve. The first was editing, the second was color grading, and the third was creating visual effects in their Fusion FX workspace. All with the same media, updating the same editing timeline. Saccone narrated and switched screens as an edit was in process, while it was being color corrected on the second workstation, and VFX were created and added to the timeline on the third. As it was a shared-media environment, the timeline could be updated as different clips were modified and readied. 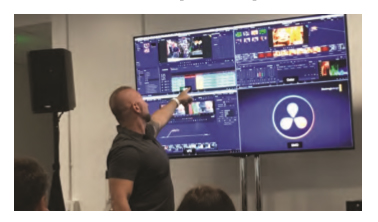 Resolve includes a secure chat feature, so people on the network can easily communicate. One very cool aspect of Resolve is proxies of the full-resolution media can be easily managed in the background. Cut sequences can be quickly output and posted to media sharing site frame.io. There, the cut can be viewed, annotated, drawn on and then posted back into the editing timeline for fixes. Although Resolve operates in one window, it can work with two monitors and bins can be opened as independent windows.

The ability to work on these three aspects at once was impressive. It does point to the slight misunderstanding some vendors have about what ACE editors do. It isn’t generally important for our editing rooms to have color and VFX working on the same timeline at the same time. Having Fairlight, the audio workspace, able to work on a sequence at the same time would be more valuable, but isn’t a current feature.

Next to present was Michael Krulik, who demonstrated Avid Media Composer 2019.6. Based on feedback from editors and new users, the whole workspace is now modular. Basically there’s a bin container, composer and timeline windows in one overall ‘host panel.’ There is no longer a project window. The whole interface is much more colorful. There now are only two ‘skins,’ dark and light. Dark mode is much in line with the macOS dark mode. Controls on the color of the interface have been reduced, but there still is customization possible. Avid’s goal, according to Krulik, is to keep all the features of Media Composer, but modernize the look and feel. 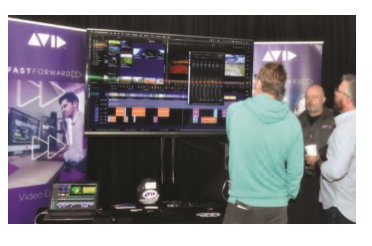 Some innovations to this version of Media Composer include a bin map that shows the layout of clips in a bin that may not be large enough to show all clips, an Inspector tool that gives metadata on any highlighted clip or sequence, and the ability to work in and export in full-quality 32-bit float. (That last feature is well above my pay grade of understanding. You’ll have to look it up on your own.)

Krulik also showed several neat tips and tricks, which he always includes when demonstrating Media Composer. It now can have 64 tracks of video (the crowd groaned); clips in a timeline can now be selected by their common colors, copied, then placed in a new sequence in sync; and both video and audio clips in a timeline can be muted.

The final presentation of the morning session was for Evercast, presented by Roger Barton, ACE, who is currently editing a Netflix movie for Michael Bay. This is a remote video sharing/ collaboration system. From his editing room in Los Angeles, Barton can have an interactive editing session with a director anywhere in the world, provided there is a “robust” internet connection. He first used this system on Godzilla: King of the Monsters, where he said he had more face time with a director because of this system than on any movie he’d edited before.

Evercast described features for security (two-factor authentication, no files are uploaded or sent), ease of use (no proprietary hardware necessary), extreme low latency between workstations (it’s fast), increased efficiency, and the ability to record the edit session to use as a reference while making changes later. Barton shared that as a new single father, working close to home to be near family was more important than ever to him. “It will improve the quality of our work, as well as the quality of our lives.”

As this was the debut TechFest, ACE Executive Director Jenni McCormick asks members to provide feedback about what they’d want to see for future TechFests.

It was a fantastic day, learning about all the features of the current editing systems, and other new software and hardware. And it was a good day for a foot massage.