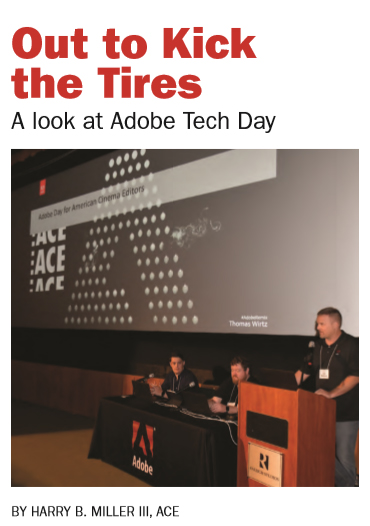 The ACE Tech Day featuring Adobe was attended by the curious: Many were editors who hadn’t seriously used or had experimented only briefly with Premiere Pro. And their curiosity was rewarded. Held Sept. 7 at Raleigh Studios, Tech Day had many from Adobe’s team in attendance, including Mike Kanfer (Principal Strategic Development Manager), Meagan Keene (Senior Product Marketing Manager), Michael Phillips (co-inventor and designer of Avid’s Media Composer and general all-around very smart guy) and several others.

Adobe always brings a full team to events such as this. The day was led by Van Bedient (Head of Strategic Development) and presented by Karl Soule and Matt Christensen.

First up was an exclusive sneak peek extended scene – previously shown only at the 2019 Comic Con panel – for Terminator: Dark Fate. Directed by Tim Miller, edited by Julian Clarke, ACE, they are the team that used Premiere Pro and connected applications on Deadpool. It was a very entertaining start for the day. One couldn’t tell how Premiere was used, but it looked great and certainly isn’t a bad advertisement for the editing software. Next was a video presentation featuring the many productions that have used Premiere Pro. These included the Coen brothers’ The Ballad of Buster Scruggs, David Fincher’s Mindhunter and FX series Atlanta. Next was a look at Premiere Pro.

The main focus of the presentation was a new workflow to facilitate editors sharing on a network. It’s called Premiere Pro Productions. A Production is the umbrella project you would create for a film, documentary or episodic TV show. Within that you’d create folders and bins for editors and assistants to work.

Part of the Production workflow includes a new data model for tracking clips and sequences which eliminates any instances of duplicate clips which previously could occur. The point of a Production is to organize bin locking, where several editors can share a Production and lock bins (dailies, sequences) while they are working. Once locked, no one else can alter anything within that bin.

There is no chance you could open a locked bin, do a lot of your best editing work, then lose it because it can’t be saved. Soule demonstrated as he and Christensen locked and unlocked bins. They also showed off the Freeform bin arrangement, where picture tiles in a bin can be up to four different sizes and can be placed anywhere in the bin’s work area. It is an impressive new feature.

Then some magic started happening. Adobe has been investing resources into Artificial Intelligence that is applied in different tools, which they term Sensei. Premiere Pro now uses what’s called ‘Content Aware Fill for Video.’ They showed a shot of a couple in a field. As it pans, a boom operator comes into the shot. By drawing a mask around the boom operator, the computer figures out the pixels needed to replace him with the background. It is very similar to the Mocha Pro plugin from BorisFX. It was very impressive.

Then Richard Zhang took the podium. He is researching AI for Adobe, and showed not only how deep learning can create deep fakes, i.e. a person saying something different from what they actually said, but also how deep fakes can be exposed. One great example of manipulating media through AI had a ballet dancer modifying the behavior of a standing person – to becoming a person mimicking the ballet dancing. Funny. And scary.

After lunch Vashi Nedomansky, ACE, and director/editor Todd Douglas Miller discussed the making of the CNN Films documentary Apollo 11. Adobe is intent on having a place in the Hollywood editing community. They have an edit suite in Santa Monica designed for training. They offer free one-on-one training for ACE members. They have seminars at the Motion Picture Editors Guild. And they have a direct email address for ACE. I’ve used it, and got an immediate answer to my comment.

And Adobe is open to collaboration with other developers. Bedient made the point that Adobe works with about 320 partners who write add-ons or extensions to Premiere Pro. One example is Frame.io, which has a system for remotely getting notes from a director that can be placed directly in your timeline.

So, these curious editors may have gotten inspired to kick the tires on Adobe Premiere Pro on their own. There was certainly enough in the Tech Day presentation to pique their interest.