Making the World a Smaller Place 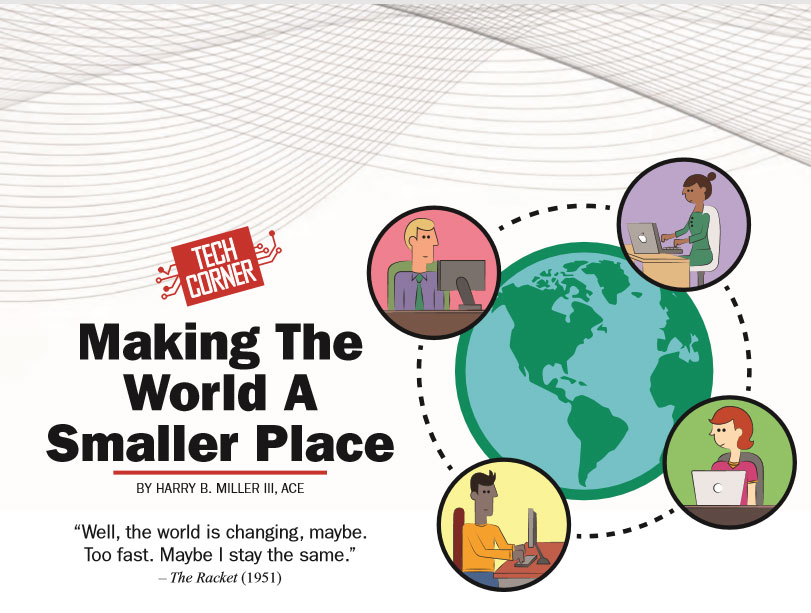 It is more common today for editors to be working a great distance from where the production is being shot. Vancouver, Atlanta, New Orleans, Budapest – all are popular shooting locations because of subsidies and tax breaks. In the past, editors went on location. How else could anyone watch film dailies without the cutting room being close by? With digital technology, that is less necessary. Remote editing solutions will make it even less so. My first attempt at a remote editing session involved pointing my laptop at my client monitor. “Can you see anything?”

The director on the other end of the FaceTime call was looking through her iPad from London. “I think so. Uh oh. My battery is going south!” It was a less-than-stellar experience. The next significant remote session was on a Cinemax show. The edit rooms were near downtown L.A., and the production office, with the producers and writers, was in South Carolina. This was done with a piece of hardware called the Ipela. Made by Sony, it involved a control box, camera, microphone and monitor at both ends. The Avid output was fed into the system so the producers could see and hear the cut episode. Each side could see and hear each other in the monitor. We connected over the VoIP phone system.

The problem with this system was it had to be moved to which- ever editing room needed the remote conference. There were three editors. And it wasn’t simple to connect. Tech support handled that. And the input/output volumes had to be carefully set, otherwise there could be feedback. Now there is the new system: Evercast. Founded by Alex Cyrell and Brad Thomas, the face of Evercast is editor Roger Barton, ACE (Godzilla: King of the Monsters, Pirates of the Caribbean: Dead Men Tell No Tales, Terminator Genisys). Evercast is a way that multiple people can share a picture editing session, a VFX review session, or other real-time collaborations. All live, across the country or the world.

Roger Barton first saw Evercast before editing Godzilla: King of the Monsters. He set up a remote editing session as a test with his director, Michael Dougherty. It went so well he was told he didn’t need to be on location, that he could stay in Los Angeles with his family while cutting the movie. Thus missing out on all the exotic wonders of Atlanta.

Here is how it works. A laptop specially configured by Evercast is provided to the editor. The output from the Avid to the client monitor is split between the monitor and a capture card connected to the laptop. That allows for the cut scene, or the editor’s entire workspace, to be viewed remotely.  The director/producer then follows an internet link in a Chrome browser to connect with the editor. With both computers having a camera and microphone, both locations are now live.

When I joined this first session with Roger, Alex and Brad,  I couldn’t hear anything. Rats! I knew this was a problem on my end. You know how you hate when a website starts playing video and everyone hears its audio in your ADR session? I had added an extension to Chrome to prevent that. Unfortunately, my Chrome browser now won’t transmit any audio. And Evercast currently only works with a Chrome browser. Yikes. Quick: Grab the wife’s computer (thanks Nancy!), log her out, log me in. … and back to the Evercast session.

This view shows the editor’s software interface (Adobe Premiere Pro), four participants in the connected stream, and the available Evercast controls. The Evercast interface shifts depending on where the mouse cursor is placed, and what functions are needed. You can also just see the edit output.

The playback originating from Brad Thomas’ system looked sharp (no pixelation or stuttering) and sounded good. There were some sound glitches in the first clip. It’s possible that was from my system being connected to a Wi-Fi connection. An Ethernet connection on both ends would have been the ideal. Generally though, everything worked well. I could see a few edits performed in real time. And all of us could communicate clearly. But what about security? Studios loathe to post anything online, often prefer the much maligned PIX System (Deserved? Um … yeah).

Legendary Pictures security and post-production departments reviewed and approved Evercast’s use by Roger Barton on Godzilla. Independent Security Evaluators, a security consulting firm, has since evaluated Evercast which has led to approval by other studios. The developers couldn’t name other clients or productions due to … security. To be more secure, Evercast is not trying to be a ubiquitous consumer service. “Security through obscurity,” says Barton. And as part of the security, everything on the platform is encrypted, and no files leave the system. You can’t download anything. But you can play back previous sessions – even playing a session within a new session.

There are advantages to Evercast. You can add time-stamped text notes to your recorded edit session. So, for example, you could record a cut into Evercast and your director/producer could watch at another time and location, while adding notes for changes.

That video with notes could also be shared with a VFX company. A drawing tool is being added (not yet fully implemented) so participants can illustrate notes directly on screen. This is similar to a service like cineSync. But faster. Unlike cineSync you don’t share the video files beforehand with every participant for it to work. The sharing is in real time, streamed. This system is currently a laptop and capture card provided by Evercast, one of which resides with any participant who needs to send content. There can be up to eight participants to a session, including passive viewers. The viewers need only a computer with a webcam, speaker, microphone and Chrome browser.

The developers are working on broadening this out to include iOS devices. Says Roger Barton: “Though I wanted to use Evercast as a means of staying in town … I was surprised by the benefit of having more face time with the director than I’ve ever experienced during the shoot – even after being sent to location for months at a time.” Making the world a smaller place may make it a more productive place as well.