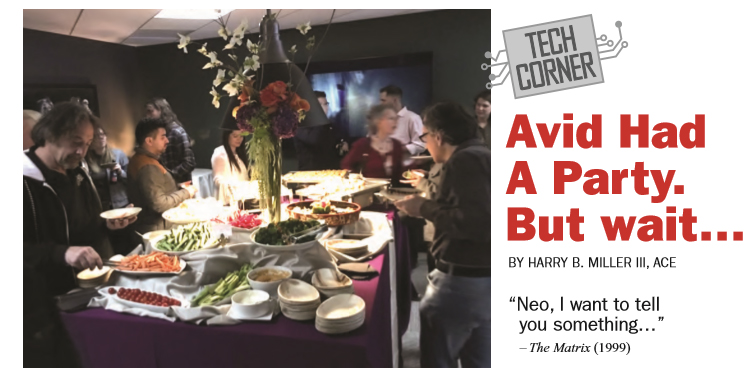 Avid had a party. A coming-out party for their new, happier interface. Their Burbank office was jammed with people on May 15 to enjoy food and drink, and to see demonstrations of the latest Avid Media Composer. But wait, I want to tell you something, but that isn’t it… Premiere Pro has added a couple of features in its latest version that make it a very strong competitor to Avid Media Composer in the Hollywood editing space. You can see two timelines at once, including your source monitor, and edit from one into the other. Bins can be locked on networked systems, so projects can now be shared. Under fairly simple circumstances it is very, very fast and never crashes. And a new bin layout type called Freeform has been introduced, which is terrifically flexible, and unique among editing systems. But that isn’t what I wanted to tell you…

I wrote previously for CinemaEditor that Apple had apparently given up on making computers for professional editors (Miller, H.B. {2017} “Is Apple Inc. Just a Phone Company?” CinemaEditor, Quarter 1, Vol. 67, 16-17). My question: Was it time to invest in a Windows laptop to replace the aging MacBook Pro (2014)? Mac laptops were heading in the wrong direction for usability and performance, and PC laptops were getting faster and more flexible. Then Apple released the 2018 Mac mini. Up to a 6-core i7 processor, up to 64 GB RAM, and up to a 2 TB SSD.

And this is what I wanted to tell you: This thing is great! But more on that later.

The Avid event was sort of a coming-out party to show lots of people the redesigned Media Composer interface. It is brighter, more colorful and now modular. That means that, like the Premiere Pro interface, everything is locked into a full-screen dock. Resize the host panel, as it is called, and everything resizes. It is simplified, more for new users. For power users however, the whole single dock can be broken up to individual components, like the current Media Composer.

There were several spaces at Avid’s office where Media Composer was being demonstrated. It was, however, a bit difficult to get a lot of information because the place was so crowded. But it was a very good opportunity to run into fellow editors and post people. 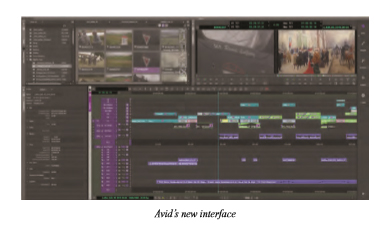 The new Media Composer, during these demos, had a tendency to crash. Presumably now all of the bugs will be worked out. (Um, presumably. Right Avid?)

Adobe has made great strides in fashioning Premiere Pro for bigger things than just home videos. Currently I am editing an Imax nature film called Back From the Brink. The story is about three animal species that were endangered, but concerned scientists and researchers discovered what was necessary to ensure their survival. Steps were then taken to successfully save these species, by rebalancing their environment.

The movie was shot with a Red camera, at 5K and 8K. The post- production company managing the project, RPG Productions (run by Rick Gordon), gathered all the media from the many hard drive sources and transcoded everything from Red files to ProRes 422 HQ, 1920 x 1080. There is so much footage, it is a nature doc after all, that the transcoded media takes more than seven terabytes! Fortunately, the director/DP has a pretty good memory for what he shot. And he made the initial assembly pass with his favorite material.

Because of the solid organization and preparation by assistant David Palmeri, the project has not crashed. At all. Not once. (I can’t get through a single day on other unnamed editing systems and say that same thing.)

The great thing about Premiere Pro is if you had any experience working on Final Cut Pro 7, you’ll feel right at home. And you can easily set up the keyboard to mimic your Avid (or FCP X) keyboard. It is fast and flexible. While the timeline is playing you can even do minor editing without stopping, like Pro Tools. And the new features Adobe has added (viewing multiple timelines at once, bin locking, Bezier audio keyframes, Freeform bin view) make it very usable.

The downside is the current version of Premiere Pro (13.1.2) and Media Encoder (13.1) can output incorrect timecode. The fix, until Adobe makes a software correction, is to turn the Mercury Playback Engine to ‘Software Only’ in both programs. Thanks to Mike Kanfer of Adobe for that information. But what I really wanted to tell you about is this:

The Mac mini. It’s so small and cute! And dark. It literally disappears on the unlit shelf on my desk. And outperforms anything I’ve ever used, including a refurbished, upgraded Mac Pro ‘cheese grater’ tower.

Realizing that I’m much too ingrained in the Apple ecosystem to change editing workstations to a Windows PC (see the above referenced CinemaEditor article), I decided that I’d give this Mini a shot. And it’s a ‘mini.’ How much could it cost?

Well, once you ‘spec’ it up, it costs a lot. The upgraded Mac mini with 6-core i7 CPU, 32 GB RAM and 1TB SSD runs around $2900. Then you realize it has lots of connectors, but none connect to any device you own. I needed to invest in $100 worth of adapters (Thunderbolt 2 to 3). And there are so many devices you need to plug in, such as keyboard, mouse, monitor, hard drives, you then need to invest in a $300 multi-port dock, which adds several more USB 3, USB 2, HDMI, etc. connections. The additional components needed to make it work become part of the ‘Apple tax,’ the extra you have to spend to be in the Apple universe of products. At least it is less than the newly-announced Mac Pro ($6000 to start).

This was just going to be a trial. Apple allows a 14-day window to return a product if you’re unhappy. I tried an iPad Pro. It didn’t work for me (too big), and it was returned without a problem. The test was to see if the Mac mini would truly be a performance improvement over my current home editing system.

I tested the mini with Media Composer for transcoding clips, rendering a timeline with VFX plugins and timecode, and Adobe Media Encoder for an export.

In every process I tried that is part of my editing workflow, the Mac mini was significantly faster than my other two computers.

Another great thing about the Mac mini is macOS Mojave’s dark mode. It is DARK. But very attractive, and semitranslucent. Some windows, like the Info window, are so dark they are almost readable.

The one area where the mini does not excel is using an eGPU (external graphics card) with Media Composer. Michael Kammes reviewed a Mac mini with an eGPU on his podcast, “5 Things” (https://5thingsseries.com), and found that Media Composer does not take advantage, while Premiere Pro does. But where is the graphics card important? Mostly for computer displays and running intense graphic games.

Where Adobe fails is that editing projects aren’t always backward compatible. You can open an Avid sequence with a few exceptions in every version of Media Composer. A Premiere project often can’t be opened in the next previous version
of the software. And this timecode issue could be serious if not quickly addressed.

And I don’t know of a shared/networked project on Adobe that has worked well. Not as seamlessly as Media Composer projects work. There may be, I just haven’t heard of one.

And that’s what I wanted to tell you!