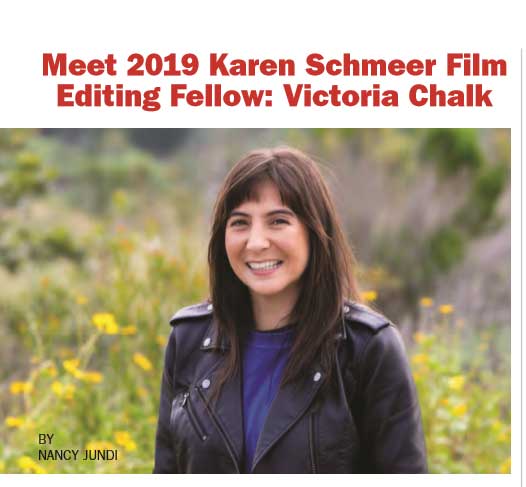 The Karen Schmeer Film Editing Fellowship (KSFEF), now in its ninth year, is annually awarded to a new Fellow during the SXSW Film Festival Awards ceremony.

This year’s Fellow, Victoria Chalk, is a British-Chinese film editor whose career in post-production has spanned more than a decade, several countries and garnered numerous accolades.

“Growing up British/Malay in rural France forced me to see things differently. I have lived a life of constant adaptation, bridging the gap between cultures and social norms” says Chalk.

“Struggling to learn a new language in my early teens made me realize how difficult it is to express oneself when conscious of translating. As I became fluent in French, I would joke about having two different personas, since I wouldn’t express myself the same way in English as in French. I wouldn’t have the same go to expressions, the same sense of humor, the same vocabulary, and this fascinated me.

This is what first drew me to editing. There are endless possibilities to the artistry of expressing emotion, plot, pacing and storytelling.”

Chalk’s latest feature documentary, Call Her Ganda, which tells the story of a transgender Filipina woman who was brutally murdered and left in a motel room in the Philippines, premiered at the 2018 Tribeca Film Festival and was the winner of the Los Angeles Asian Pacific Film Festival Grand Jury Award.

The film’s director and Chalk’s longtime collaborator, PJ Raval, who gave a keynote at SXSW this year, remarked, “Victoria’s ability to empathize enables her to view the footage through the subject’s own perspective, avoiding the pitfalls of extractive filmmaking or reducing our subjects to
victims or ‘others’.”

Sponsored annually by ACE, the KSFEF was established to develop an emerging documentary film editor by offering opportunities for creative growth and professional community building.

The Fellowship pays tribute to the legacy of Karen Schmeer, ACE, who edited projects including the Academy Award®winning The Fog of War in addition to the controversial Mr. Death and the IFC series, First Person.

Schmeer died in 2010 when she was struck by a car in a hit-and-run accident. This year, the Fellowship launched a new initiative called the “Diversity in the Edit Room” program with 29 mentees selected in this inaugural year.

It’s designed to cultivate the careers of emerging assistant editors and editors from diverse backgrounds and experiences working in the documentary field. Garret Savage, KSFEF founding board member and diversity committee co-chair, says, “We’d like to acknowledge American Cinema Editors’ Diversity Mentorship Program, headed by Troy Takaki (ACE) and Mark Yoshikawa (ACE), as an inspiration and model for ours and thank Troy and Mark for their guidance.”

Of the many benefits the KSFEF bestows on a Fellow, Chalk is most looking forward to learning from her appointed mentors who include Victor Livingston (The Queen of Versailles, Crumb), Azin Samari (The September Issue, Ethel), and previous KSFEF recipient Lindsay Utz (American Factory, Quest).

Says Chalk, “The Karen Schmeer Fellowship will allow me to grow in experience, confidence and communication in profound ways. The mentorship and support it provides is like nothing else. The community offered through this fellowship is also a way for me to help my own communities thrive.”

Chalk hopes to harness what she can from this experience to inspire other emerging editors from diverse and marginalized backgrounds, sharing her resources and what she learns with them. “I truly believe that the organizing I do with the Asian American Documentary Network (A-DOC), shines a spotlight on the lack of access and opportunities we have as a community of people of color. If I can add to the resources and bring something back to filmmakers in that space, I will,” says Chalk.

Chalk’s next feature documentary,  A Woman’s Work: The NFL’s Cheerleader Problem, directed by Yu Gu, will premiere at the 2019 Tribeca Film Festival where half of this year’s competition lineup were directed or co-directed by women.

ACE is a proud sponsor of the KSFEF and through the program, Chalk receives associate membership in ACE as well as admission to EditFest in Los Angeles.