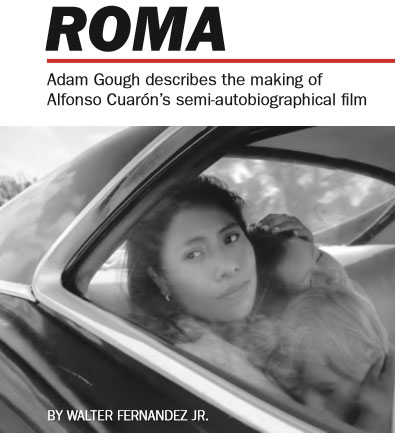 Composed as a love letter to Mexico City and the maid (Yalitza Aparicio) that helped raise him, writer/director Alfonso Cuarón’s Roma takes place in the early 1970s and follows an emotional journey of family dynamics, political upheaval, cultural intricacies and wide-eyed adventurousness from the capital to the coast. Told in Spanish and Mixtec, the film’s semi-autobiographical narrative was edited by burgeoning editor Adam Gough and Cuarón.

Since then, it won the Golden Lion at the Venice Film Festival and was selected to be Mexico’s foreign-language Oscar® entry. “I remember the day Alfonso called me up and told me the next project was going to be Roma,” Gough recalls. “I honestly thought the phone call was going to be, ‘Not this one. It might be a bit tricky.’ He phoned me up said we’re good to go. We’re going to need you out there in a couple of months. I told him, ‘You do know my Spanish is not great. In fact, it’s non-existent.’ He was incredibly supportive and said, ‘Don’t worry. Mine’s good enough. I think we can get through it.’ From very early on he knew how that was going to be.

I had a fantastic assistant [Melanie Haslam] that was putting markers on everything and translating it for me. Then, I would just edit the rhythm of the dialogue. There were moments it got tricky. Prior to this, I did a documentary [Hand of God] in Arabic, so not speaking any of that either, I got myself into a headspace of understanding the rhythms of the languages as long as you know where the emphasis is. I haven’t cut in English for two and a half years.”

Working on Roma brought Gough full circle in his career thus far. His first film had been Children of Men, which Cuarón directed over a decade earlier. “I always wanted to edit coming out of university,” admits Gough. “The way I got my break was working my way up through the cutting room as a PA. Children of Men is my first on-screen credit.

Now I’m editing with the same director 12 years later. It’s been quite an incredible journey.” Cuarón and Gough had not worked together in the interim, but Cuarón found himself in need of an editor about three or four years ago. Gough shares, “My name made the list of available editors and purely out of recognition from my past work on Children of Men as an editorial PA. I was given the opportunity of working with him again on a very low-key promo.

This was kind of like the job interview to see if we could get along and if I could technically handle what he needed. That all went really well. I just became part of the team; keeping in contact, reading the scripts that he was developing and looking to move forward on. I was lined up to do whatever project he had coming up.” Although this was his second time working on a Cuarón feature, it really was the first time they were actually collaborating together. Gough explains, “I really enjoyed it. 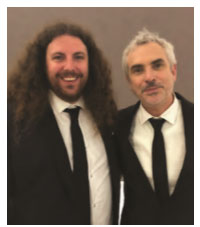 The first few weeks working out the emotion of the cutting room were a little ropy. When I was doing the teaser promo for him very early on, I was going through dailies and he asked me my opinion on something and, to be honest, I was just controlling the footage and not paying much attention and told him I needed to watch that again. He gave me a stern talking to.‘Listen. I’ve not hired you to just push buttons. You’re here for your opinion and we’re collaborating on this together.’

It was a very good lesson learned early on prior to Roma. So, now I feel it’s my part to do my research and understand everything and talk about everything in detail. If there is something I don’t understand, I’ll bring it up in conversation so I know what I’m looking for and how it’s working. It’s truly collaborative.” Of course, an unconventional film would have an unconventional production. “There wasn’t a shooting script,” admits Gough. “Alfonso wouldn’t let anyone have the script, cast or crew.

The actors would get their pages on the day and I didn’t get my hands on it until after the shoot, so I didn’t know what I was going to see in dailies. I had a very rough overview of the story from what Alfonso had told me, but didn’t know the outcome of major events and ultimately what was going to happen to our characters. I would watch dailies completely clean, as an audience member would for the first time. I found that I wasn’t analyzing anything as an editor and was letting the emotion of the footage control my response to it.

There would be days where I would be watching dailies in tears. This gave me a very unique opinion that I would then bring to the discussion once I started choosing the selects with Alfonso. This was important as there were incredibly strong options from the first take. The lead actress [Aparicio] was just incredible and Alfonso would also be shooting about 20 takes of everything.

In fact, there is one scene that plays in a master shot for [less than 5] minutes that had 60 takes. Working with long takes can be tricky when finding the most natural flow for the edit. No cut was ever made for comment, it was all about getting the best in and out that keeps the emotional thought alive. There was also no score to rely on for help and there are no J or L cuts (audio or picture overlaps) used over scene transitions. Every single edit is bare and needed to work within the rhythm and emotional flow of the film.” 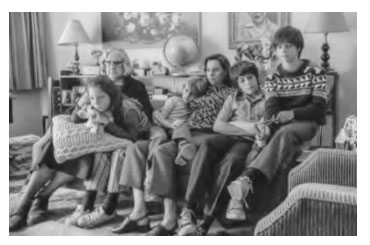 He continues, “This film is based on Alfonso’s childhood so most of this is designed from memory and shooting in real locations in the environments that these events took place. We have a tracking shot following people walking down the road where there is a real geography to what’s behind the camera in terms of audio. It’s not just a building, it’s a park; there are trees in particular places that would have a certain type of bird in them, which need to move correctly with the camera.

These detailed notes about the environment came up early during the edit. I would add sound effects Alfonso liked and pan them to the correct placement so that when we hand it over to the sound department, I could help them understand the geography and design ideas.” One of the biggest challenges Gough faced was coordinating an international editorial team. He confides, “It was tricky during the edit. My assistants and post-supervisor were in Mexico and I was in Italy.

The amount of work it took to ensure the details and notes were getting conveyed effectively was great. I was the middle of the hourglass. Everything was passing through me; sound notes, grading notes, visual effects notes. There was a lot of information being passed on, but it was what was required to track such detail.

I’d already had such deep conversations with Alfonso about everything, that once in the sound mix I could go off into a different room and be pre-mixing the vast amounts of loop groups making sure everything was set up to work in a Dolby Atmos environment.” Cuarón carefully selected his crew, as well as sophisticated technology with which to work. Gough shares, “Alfonso wanted all the best tools at his disposal. He shot [Roma] on the Arri Alexa 65. We had lots of time on the mixing stage – more than I’ve had on pricier studio projects. Working in Dolby Atmos from the first day of the mix and not doing an Atmos push at the end. An HDR grade was done and the visual effects were working at 4K. He knows how to push boundaries even on a low budget movie.”

Since this movie was told from life experiences, Cuarón decided to forgo a composer and use all source music. Gough remembers, “[Music supervisor] Lynn Fainchtein came out to Italy and we did a few sessions. We were in constant communication. When going through and building the edit, we went into detail very early on in sound design and music. We were experimenting with the radio content, listening to hours of commercials, presenters talking and station IDs from the period.

It was all additional detail that was relevant to the time and place of the story. There were a few moments that Alfonso already had strong ideas for the music, but even if something worked well, he would always be happy to continue experimenting if there was a new idea. When the father returns home early on in the film, there is a waltz playing on the radio (Symphonie fantastique, Op. 14: II Un bal) that is perfect for
the moment. It was the song Alfonso originally had in mind for the scene but we went back and tried a couple of other options just to make sure it was the best it could be.” For the technical aspects, Gough recalls, “I wanted to be as portable as possible as I would be editing between London and Italy. I had sets of peripherals and monitors at each location be it Alfonso’s home or the post house. I would just bring my laptop and the smallest possible drive with me everywhere. I didn’t want to edit in 4K or HDR. It was all about simplicity.”

Reflecting on his career up to now, Gough admits, “My game plan has always been a step behind me. The breaks and opportunities I’ve had have always come slightly quicker than I was expecting. I’ve just rolled with it. I never cut much as an assistant. I worked on big productions coming over [to Britain]. It benefited me.

The more people you work with, the more skills you learn. I learned by watching them. Lee Smith [ACE] and how he deals with politics. Chris Lebenzon [ACE] with how quickly he can get a cut together. Jon Gregory’s [ACE] rhythm and flow. I’ve been incredibly lucky to work with such fantastic editors.”

Gough had two salient experiences as an assistant that enhanced his career trajectory. “I do remember, doing a conform check on Sweeney Todd,” he recalls. “This is the best place to learn as an assistant. Looking at how the editor has placed the cuts, where you can step through every frame looking at the A and the B sides, analyzing what they’re doing. For me, just seeing how Chris [Lebenzon] was overlapping action was a fantastic bit of film schooling for me.”

His next job would only enhance what he had just learned. He continues, “[By the time I started working on In Bruges], I had gone from being a PA and stepping into a second assistant role. I got a little more responsibility, and with it being a smaller intimate project, got to spend more time with the editor and director. Jon Gregory is incredible. He is one of my editing heroes. Having the opportunity of working with him and [director] Martin McDonagh was great. I was invited to watch and discuss cuts with them.

For me, it was my first truly creative role where my opinion mattered.  I wasn’t just part of the machinery getting out turnovers and running around. It suddenly all slowed down for me and started to come into focus. That was a fantastic experience that I enjoyed a lot.” Gough has agreed to work on Cuarón’s next feature, which starts sometime in 2019 and now has representation through ICM.