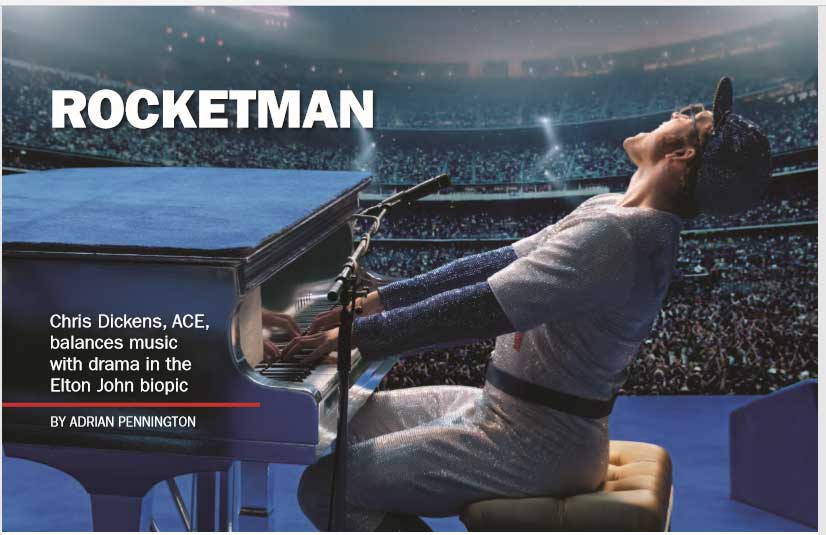 Coming so soon after the Oscar®-winning success of Bohemian Rhapsody, this rock ’n’ roll biopic of Elton John was always destined to face comparison.

Director Dexter Fletcher had also completed the Freddie Mercury project for 20th Century Fox after it parted ways with Bryan Singer. “We know it will get compared but there are essential differences,” says Chris Dickens, ACE, (Slumdog Millionaire, Mary Queen of Scots) who edited the film. “It’s not purely a rock biopic – it’s a musical with choreographed dance numbers.”

Penned by Lee Hall and produced by Matthew Vaughn (X-Men: The Last Stand, Kick Ass), Rocketman charts the story of John’s life from his years as a prodigy at the Royal Academy of Music, through his influential and enduring musical partnership with songwriter Bernie Taupin, as well as his struggles with alcohol, substance abuse and his identity.

“Dexter has a very gregarious personality. He’s very open to ideas,” Dickens says. “During shooting he wants to see how a scene looks all the time. It’s almost like he wanted to see it cut together before he’s shot it – he was that fast. There was a constant to-and-fro between us with notes on sequences I’d cut. He also likes a lot of people – including the actors – to come in and watch a cut of a scene.” 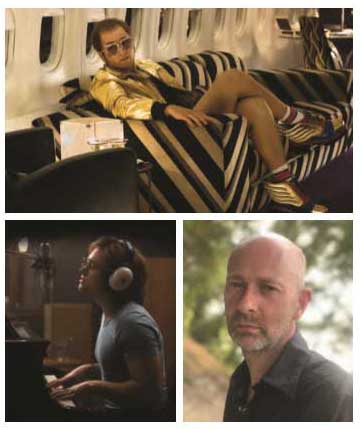 Dickens explains that the main challenge shaping the story was balancing the musical numbers with the drama. “The spaces in between the songs become very important. Judging the right length for each scene and of each musical number was what we worked a lot on in order to find the film we wanted to tell.”

Meanwhile, Elton John himself was one of film’s executive producers. “He and David Furnish (John’s husband and a producer of the film) had always wanted it to be a musical fantasy,” Dickens relates. “The story arc is similar to many biopics in that there’s a trajectory from rags to riches, what happens when a person has riches and how they overcome that, but the message is very different with this film. [Bohemian Rhapsody] had a powerful and well-known tragedy at its heart.

We don’t have that but our film does delve into darker territory.” The film’s structure contains a series of flashbacks, the first of which is introduced at the film’s beginning as John presents himself as an addict in rehab, before the story travels back in time to his youth. “We check in with him at rehab every so often as a mechanism to keep you up to date with him and his progress in overcoming various issues and how he became the person he is now.”

Music producer Giles Martin (son of legendary Beatles producer George Martin) rearranged all the tracks in the film and they were recorded with Egerton’s vocals, although his recording was played back for miming during filming.

The film’s soundtrack ranges from John’s first hit single, “Your Song,” to lesser-known numbers like “Take Me to the Pilot” and “Rock and Roll Madonna,” used by Dickens as background or to cut a sequence to. “Goodbye Yellow Brick Road,” about wanting to give up a life of opulence for a simpler life away from all the glitz and glamour, is associated with John’s rehab from drinking, drug and personal problems.

They also used a track from Bluesology, a band in which Reginald Dwight, later Elton John, was a member. “In order to tell the story we couldn’t use songs all the time,” Dickens explains. “Sometimes we use lyrics from his songs in dialogue, sometimes the treatment of songs at certain points in his life tell us what we want to convey.”

Music and picture editing go hand in hand but Rocketman took this further than on any previous show Dickens had worked on. His partners in arms were Martin and composer Matthew Margeson who previously scored Eddie the Eagle (produced by Vaughn, directed by Fletcher, starring Egerton) and the Vaughndirected Kingsman movies. 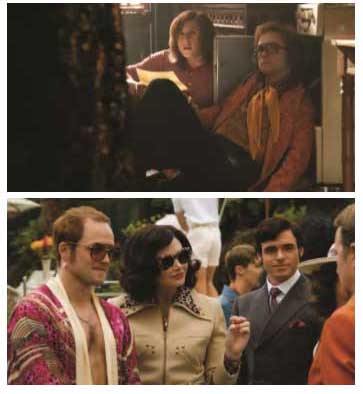 “It was a really free way to work. I’d select some temp tracks and Matt would come in and rework it. We’d often use musical motifs and melodies from Elton’s songs. We could change the treatment of a song and write new themes if it was playing too loud or we felt it needed more orchestral arrangement. So, during the edit we evolved picture and soundtrack in tandem more than on most movies. I hope we made the right choices. Because the film is set up in such a way that the musical numbers need to tell the story the important thing was that we needed to have some storytelling element within every song in the film.”

The first song in the film is “The Bitch Is Back,” such a provocative title on its release in 1974 that it was promptly banned on several radio stations in the U.S. and elsewhere even though the lyric parodies John’s celebrity lifestyle. “The song was filmed with a certain choreography including a moment when we see Elton (Egerton) singing to his younger self as a boy.

In editorial we found this was very distracting so we had to had to take that out and we use other elements of choreography from the scene to cut the sequence. Elsewhere we took out an entire dance number [“Honky Cat,” from 1972 which expresses John’s envy of Taupin] purely because we felt it didn’t advance the story. It looked like more a staged musical with Taron and Richard Madden dancing and it didn’t quite get us to where we wanted to be in the story.”

The song “Rocket Man” is the film’s centerpiece. The main challenge editorially was that it is staged in several places and charts a moment in the story when John is at a house party, has a breakdown, takes load of pills, tries to commit suicide by jumping into a swimming pool, sings underwater and sees younger self, is fished out, is sent to hospital, and emerges in his stage gear swinging a baseball bat ready to perform at the Dodgers Stadium in L.A.

“This sequence was all planned out but the difficulty for me was getting the geography right – traveling from A to B while he’s singing the song, being sensitive to cutting against the song’s rhythm and finding ways to make jump cuts or trimming each element to the right length,” explains Dickens. “I asked the music team to give me a bit more of the music at one point so I could make a piece fit.

When we got further down the line in editorial we realized these extra pieces upset the balance of the song, so we readjusted. Essentially, we all had to be flexible to make the cut fit the song physically and work emotionally.”