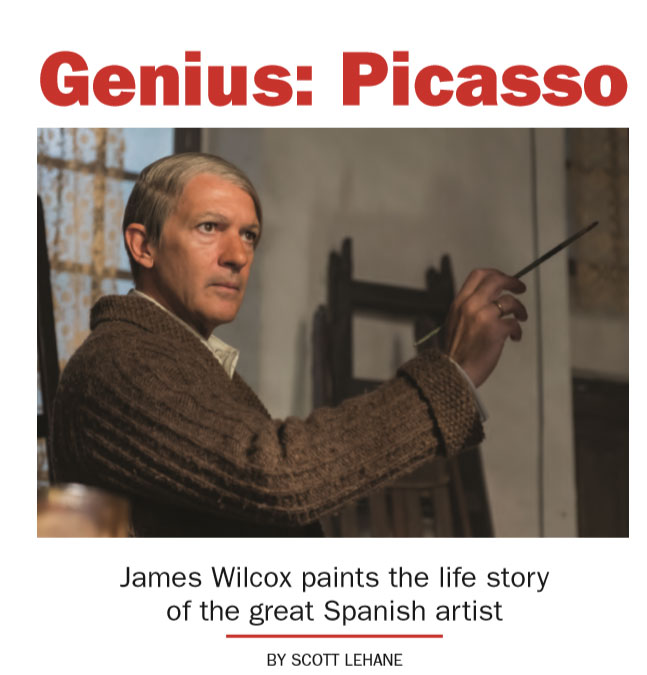 Now in its second season, National Geographic’s biopic series, Genius, follows the life stories of some of history’s greatest minds. The first season followed Albert Einstein from his early years, through his time as a patent clerk, to his later years as one of the most brilliant physicists of all time.

The second season, Genius: Picasso, which premiered April 24, focuses on the life of legendary artist Pablo Picasso, played by Antonio Banderas. National Geo- graphic has renewed the series, its first foray into scripted content, for a third season that will be based on the life of writer Mary Shelley. Editor James D. Wilcox explains that he came on board early to edit the pilot of season 1, Genius: Einstein, directed by Ron Howard, and has been with the series ever since, taking on a leading role in setting the tone for the editorial department. 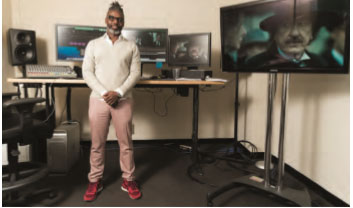 In fact, his work on the pilot earned him an ACE Eddie Award for best edited miniseries or motion picture for television. This season he edited four episodes, including co-editing the first two episodes with Debby Germino as well as the season finale. Meanwhile, James Kilton edited two and Mark Sadlek edited two. Wilcox explains that the crew would shoot for about eight days per episode for the 10-episode series. The multicamera shoot could see anywhere from two to as many as six Arri Alexa cameras deployed. Shooting took place in Spain, France and Malta. The production office was in Budapest, and the visual effects were handled at UPP in Prague. Meanwhile, the editors were based at the Nat Geo offices on the Fox lot in L.A., working on Avid, and receiving the digital files daily.

They communicated with the VFX team, where needed, via cineSync sessions. He says that, given the international nature of the project, there was a little more cushion in the editorial schedule than most shows. “On most shows, technically, I will get four days for the editor’s cut,” explains Wilcox. “On this one, we start with four days and I’m in constant contact with the co-producer regarding the schedule, and we figure out if I need a little extra time to really sit with the show. They’d rather have me take the time because it usually equates to less revisions.”

He credits the work of assistant editor Agustin Rexach with helping keep him on track. “He does a great job of ingesting the dailies and then prepping my bins,” says Wilcox “He knows how I want to work. He prepares the scenes for me, whatever comes in that day. And sometimes they have to be sorted out because they’re for other episodes. He’ll take the footage for my shows and organize it for me so I’m ready to roll when I get in to work.” Wilcox has worked with Rexach on a number of shows, including Heroes Reborn, Hawaii Five-0, Roots and Hand of God. “We have a great friendship that helps in our working relationship,” says Wilcox. “I think the challenge for an assistant editor these days, they’re asked to do so many things and there are so many organizational responsibilities, that my fear is that they’re being driven away from the core of story. If they’re marching toward becoming an editor, [time in the cutting room] is the most valuable thing they need.” 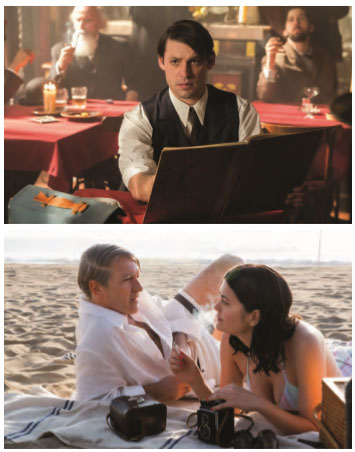 Other assistant editors on the show include Beth Conley and Nick Towle. Since the show is a period piece, a lot of the shots required set extensions and VFX to remove the trappings of modern life, like ever-present security cameras. In addition to previs mock-ups to give the editorial department a good idea of what to expect, Wilcox explains that in dailies, “the script supervisor marks every scene that is intended for visual effects work with a ‘V,’ so we know that there’s more work to be done on that.” At one point in his life Picasso was experimenting with ether and opium and other drugs, so sometimes editorial relied on the VFX team to help illustrate what’s going on in his head “and how he sees the world differently as a sort of adverse realist.”

Stylistically, Wilcox says that he cuts whatever feels right. “I don’t have a particular rhythm and style or pace that I fall into. I’m trying to keep fresh eyes on the show all the time. I almost never use the same setup twice, and that’s one of the beauties of shooting with three or more cameras.

For instance, Picasso is shown in multiple locations with multiple residences in those locations and we may shoot with three cameras on some of them. “Sometimes I use the opening shot, that establishes the character and the location, and then close the scene out with another establishing shot, but I’ll go to a different angle. That’s particularly my style: I don’t like too much visual redundancy.”

The way the show is shot has a profound impact on how it gets cut. “We use a lot of negative space on the show cinematically. We’ll have things framed extreme right, in the lower right corner and a big wide shot of a location filling the rest of the frame. We’re able to do things on this show that we probably couldn’t do on others.

We can allow the actors to have their moments.” The narrative jumps around between different periods of Picasso’s life, weaving together threads from his childhood to his old age. Making sure that the audience can follow along proved to be one of the key editorial challenges. “My job is to make sure that the audience is emotionally tracking the story across the timelines, and that can be a bit of a challenge. It can inhibit your ability to move things around,” he explains.

Wilcox explains some of the devices he uses to connect the timelines. For example, there are on-screen graphics that tell the audience what year it is and where it’s set. “I don’t like to rely on that because your eye has to go to the lower part of the screen to read. But I hold those shots long enough for your eye to be able to go down there, read what’s happening, where you are, what year you’re in, what location you’re in, and still not be disturbed by getting out of the story. I usually use my wide shot, my big, pretty masters over that. “To connect the timelines, sometimes I’ll leave a scene or enter a scene with a close-up that stamps who the character is. Then, if I’m cutting to them later in life, I’ll usually use a close-up or some shot that features their face, so that you can keep track – for example, this is Picasso when he was 17; this is now a shot that features him in his mid-40s, and this is a shot that shows him in his 60s.

It’s a good device that helps the audience track age progressions. We sometimes use sound transitions and pre-lapse of dialogue and similar overlapping actions to connect the timelines.” But Wilcox added that they had to be ever cognizant of hopscotching around too much in the story. “If the audience needs to understand that certain events are happening in a particular time period, we’ll actually collapse those time periods so it comes closer together.

We’ll tell that part of the story and come close to completing it then shift to the other part of the story which could be when he is younger or when he is older. You kind of condense the idea so that you’re not jumping around too much in the story.” Wilcox adds that overall, finding this interwoven story in the edit bay was the major challenge. “Even though it’s there in the writing, once it gets shot and once it comes into my cutting room, it’s another version of telling that story,” he concludes. “We’re dealing with probably the most wellknown artist of our time, and so there are motivations to explore.

I believe that the challenges are in terms of the subject, finding out how their truth feels. What is his pain? What were those early influences that sparked a passion in him to want to be a painter? And then after he became a painter, wanting to push the boundaries to become the best who there’s ever been, ultimately to genius level. It’s portraying the idea that genius can be a gift when it’s cultivated but that it can be a curse as well.”