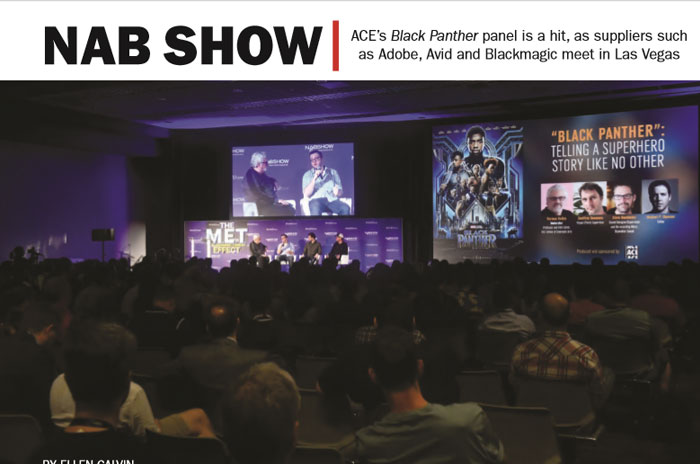 With Black Panther rocketing to over $1.3 billion at the box office and still going, a highlight of the 2018 National Association of Broadcasters Show – held April 7-12 in Las Vegas – was a packed ACE panel featuring a trio of the film’s creatives: editor Michael Shawver, ACE; VFX supervisor Geoffrey Baumann and sound designer/re-recording mixer Steve Boeddeker of Skywalker Sound.

They emphasized the team trust and collaboration which went into making the film. Shawver said, “For editors, trying to understand as much as possible about the vision that goes through the director’s head is one of the hardest parts of making movies. One person [the director] has a thought. How do you get that across for others to do their best work?”

The session was moderated by USC School of Cinematic Arts professor and film editor Norman Hollyn, ACE, who knew Shawver, the film’s co-editor, Debbie Berman, and director/writer Ryan Coogler when they studied film at USC. “The basis of our learning was how to collaborate with other people and yet not be afraid to bring your own storytelling skills to bear,” explained Shawver. “Maybe less than 40 percent of one’s time as an editor is actually editing and pushing buttons. Most of the role is having discussions.”

Collaboration was at the forefront again when Baumann talked about putting sample VFX reels together to show ideas and help Coogler, cinematographer Rachel Morrison, ASC, and editors – all of whom came from indie films – where and how VFX could help tell the story. “I had to learn how to use my imagination, and trust that I could do it,” said Shawver. Boeddeker talked about mixing the sounds of nature, ADR and music to enhance the power or emotion of a scene, and knowing when to turn it over to the live on-set sounds and music. It was also important to know when to just be quiet and let the scene play. Shawver summed up, “You tell the story essentially by deciding what is needed and what is not. Basically, editors are the liaison for the audience. Our job is to make sure you guys have the best experience.”

Impact of Artificial Intelligence
Elsewhere in the conference and on the show floor in Las Vegas conversations were dominated by artificial intelligence and machine learning. Filmmakers are faced with rising pressures to deliver more work in less time while ensuring content stands out and meets high audience expectations. Could automating some of the heavy lifting help?

AI and machine learning (ML) tools are being integrated into editing and production asset management systems to create more efficient workflows, and curate and extract vast quanti- ties of metadata. At NAB, exhibits included a sub-$4000 appliance from axle ai that integrates face and object recognition and low-res proxy collaboration and includes a panel for Premiere Pro CC. Also storage vendor Elements united with Veritone for automatic speech-to-text transcriptions; and Dalet added a Content Discovery module to its asset management software for automatic content tagging, topic extraction and key phrase searches. While AI is proving increasingly accurate and useful at recognizing images as well as analyzing script metadata to potentially slash the time taken to find clips in archives or dailies, the elephant in the room is whether AI will ever usurp humans in creativity.

“Editors, relax, artificial intelligence is not going to kill your job,” said Hollyn, speaking at an NAB conference session on the topic. He urged editors to embrace the technology as a means to assist meeting tighter deadlines and squeezed budgets.

“AI is already proving very good at image recognition,” he said, adding that AI could be used to identify sentiments and emotions in images to serve up suggestions for an editor to follow. In the same session Adobe’s Todd Burke, said, “The more specifically we can provide the results of tagging, the more efficient we’re going to make all of you.”

Adobe Touts Advances
Adobe is applying its Sensei technology to Adobe Premiere Pro. At NAB, the company announced analysis of color and light values from a reference image, which in turn are applied to match a current shot. The final adjustment can then be saved as a ‘Look’ which can be applied to other shots. Face detection capabilities can also assist in skin-tone matching.

Premiere Pro’s latest audio features are aimed at allowing more sound manipulation to be done within the software. For example, Adobe reported that an ‘autoducking’ function, driven by Sensei, would automatically adjust soundtrack audio around dialogue, for single clips or an entire project, with automatic envelopes around dialogue and sound FX which can be manipulated. Editors working with VR/360 video in both Premiere Pro and After Effects could view their work in Windows Mixed Reality head-mounted VR displays, according to Adobe. Flat graphics can also be transformed into a 360-degree spherical format. Adobe is also looking ahead to 8K video, claiming that while running Premiere Pro CC on machines fitted with AMD’s Radeon Pro SSG processors, editors could work with multiple streams of uncompressed 4K or 8K footage “as smoothly as they could with lower-quality proxy files.”

Avid Puts Cloud First
Avid – which revealed its technology news during its two-day Avid Connect customer event, held in Las Vegas during NAB – proved that its policy of offering entry-level versions of its software for free continues. Media Composer First, for example, has been downloaded 100,000 times since launch a year ago. Now it has made the more advanced Media Composer available at a lower subscription price of $20 per month. For larger facilities, there’s Media Composer Ultimate, which throws in every high-end feature including Project Sharing and Shared Storage Management.

Pro Tools First has attracted more than 650,000 downloads since its introduction and is similarly marketed in Advanced and Ultimate versions. The company further announced a free starter pack of its music notation tool, Sibelius. All of these products are now available from the cloud, specifically Microsoft Azure, and badged as Avid On Demand.

This includes a new set of tools for automated content indexing, for jobs such as closed-captioning verification, language detection, facial recognition, scene detection and speech-to-text conversion. The company is also releasing the Avid Connect App for desktop, iOS or Android with which it hopes 1.4 million Avid users worldwide will connect with each other. You can personalize your homepage with a profile and projects and add connections. Already some 45,000 members of Avid’s audio community have joined.

Blackmagic Boosts Editing in Resolve
Blackmagic Design is to add a visual effects and motion graphics suite into DaVinci Resolve. Previously available as standalone application, Fusion, this is being integrated into Resolve 15 with the final version expected to be ready in about 18 months. Among the 250 tools are features for compositing, vector paint, particles, rotoscoping, stabilization and animated titles. Blackmagic also claims it has improved load times. Colorists will have access to a new HD-to-8K upscaling feature and expanded HDR support with Dolby Vision metadata analysis and native HDR 10+ grading controls. Aside from the free version of DaVinci Resolve 15, a Studio version adds some multi-user collaboration tools, support for frame rates higher than 60p, VR tools and more filters and effects.

Proponents say this could ease data-intense workflows, particularly those using Apple Final Cut Pro. The Atomos Sumo 19-inch and Shogun Inferno recorder/monitors are among the first devices to take advantage of the format.