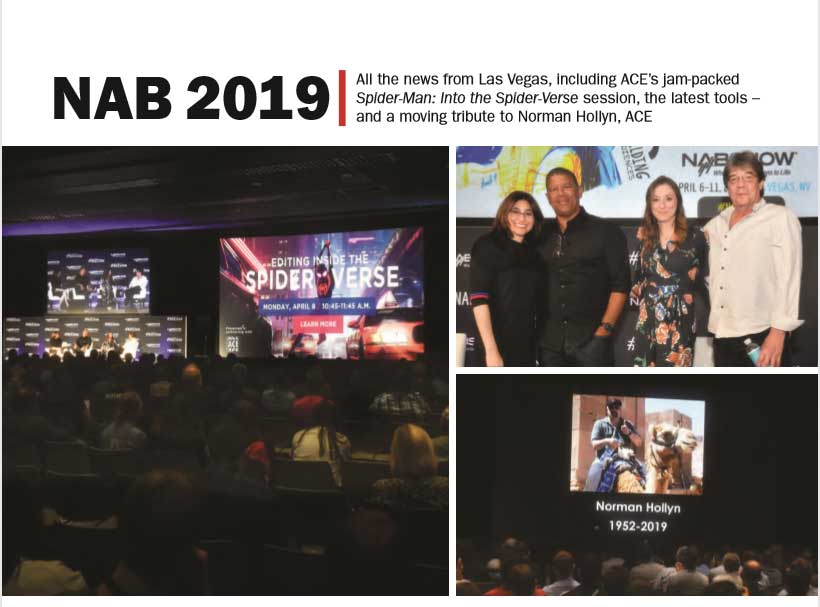 An estimated 500 attendees filled the auditorium for a program on the editing of Spider-Man: Into the SpiderVerse, presented by American Cinema Editors at the NAB Show, which this year took place April 6-11 in Las Vegas.

Creating multi-dimensional animated characters with heart was crucial to the success of the story and one of their greatest challenges, explained Fisher, who earlier this year won an ACE Eddie Award for Spider-Verse.

Of the turning point at which Morales gains his confidence and becomes Spider-Man, Fisher said, “I wanted to start the sequence with what Norman [Hollyn, ACE] called ‘the lean-forward moment.’ It’s the moment you make the audience lean forward and say, ‘Whoa, what’s that?’”

The discussion of the lean-forward moment – a term created by Norman Hollyn, ACE, who died just a few short weeks before NAB (see obituary, p. 46) – was a poignant one for the panelists and those in the audience who knew Hollyn.

From its launch, the annual ACE-NAB session had been moderated by Hollyn and this year’s program had already been prepped by the editor and USC professor. This year’s program opened with a moving tribute video to Hollyn, produced by his friend and editor, Sharon Smith Holley. Carolyn Giardina introduced the tribute and stepped in to moderate, guided by Hollyn’s preparations.

New Tools
Cloud-based production workflows and artificial-intelligence/ machine-learning (AI/ML) tools were widespread on the NAB exhibition floor. Among them were AI/ML applications including facial and object recognition, speech-to-text and enhanced metadata tagging, from companies such as Avid, Adobe and 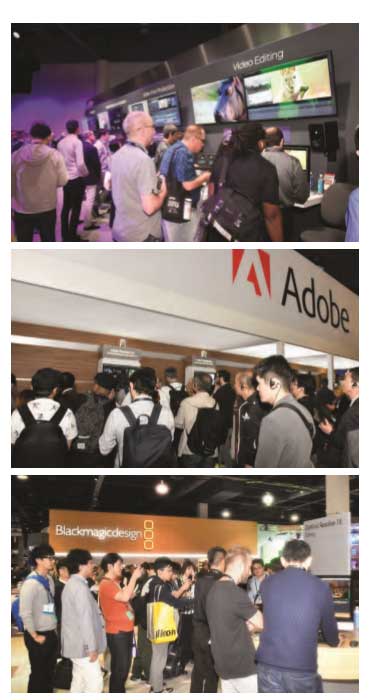 The Avid Connect customer event – featuring speakers including John Ottman, ACE, who recently won an Oscar and Eddie for Bohemian Rhapsody – opened with the unveiling of a ‘redesigned and reimagined’ Media Composer. Said Avid CEO Jeff Rosica, “Media Composer 2019 is both evolutionary and revolutionary. It maintains what longtime users know and love while giving them more of what they need today – and what they will need tomorrow.”

According to Avid, the software can handle high resolutions including 4K and 8K, HDR, Interoperable Mastering Format (IMF), and the Academy of Motion Picture Arts and Sciences’ ACES (Academy Color Encoding System). A new distributed-processing module was introduced to speed up post by sharing media processing. “Tasks that previously took hours can now be done in minutes,” asserted Avid.

It also sports a “customizable role-based user interface” in which the bins have been redesigned and the software features task-based workspaces, showing only the things the user might need for that task.

Adobe’s updates are intended to speed up workflow with the power of AI. One of the biggest announcements around Premiere Pro is the support for dual GPUs to further increase performance while rendering high-resolution video.

Adobe shared stats claiming a performance increase being up to 13x when handling mask and motion tracking in a 4K timeline based on a test system running dual Nvidia Quadro M4000 cards. Other notable updates for Premiere Pro include “Freeform” organization of the project panel to help arrange assets visually and save layouts for shot selects, production tasks, brainstorming story ideas and assembly edits.

It also claimed a more streamlined way of creating motion graphics. In After Effects there’s a content-aware fill option that allows the editor to essentially cut holes in a piece of video to remove items such as boom mics, signs or logos and even people from footage and fills in the pixels with neighboring pixel data to complete the scene – all automatically driven by Adobe’s Sensei AI.

Auto ducking of audio tracks in audio production is aimed at reducing the amount of time a mixer/editor spends creating keyframes to properly fade in or fade out audio. This function now also works with tracks designated as ambient audio.

In Blackmagic news, the company announced DaVinci Resolve 16, a new version of its software combining tools for editing, color correction, visual effects and audio post. The main focus of version 16 is a cut-page tool aimed at speeding up the cutting of commercials and other fast-turnaround projects.

For example, instead of searching for the right clip in a bin with hundreds of files, users click on a ‘source tape’ button and all the clips in the bin appear in the viewer as a single long ‘tape.’ The cut page also features a dual timeline with both in permanent view to avoid having to zoom in or out. One always shows the whole timeline. The other shows a zoomed-in view. Both permit users to move and trim clips in whichever timeline is most convenient.

The company is also using AI/ML in an aim to boost efficiency. The DaVinci Neural Engine uses ‘speed warp motion estimation’ for retiming, and has features for upscaling footage, auto color and color matching and facial recognition. The latter can be used to automatically sort and organize clips into bins based on people in the shot. The regular edit page is still available.

You can switch between edit and cut in the middle of a job. Also in the exhibition hall, AJA had several software updates for post-production including HDR Image Analyzer v1.1 firmware (developed with Colorfront) and Desktop Software v15.2 for AJA’s KONA and Io products. While there’s only a tiny amount of 8K currently in use, AJA president Nick Rashby noted that KONA 5 “provides all the necessary performance, functionality and dependability for demanding workflows including the ability to support 8K 60p.”