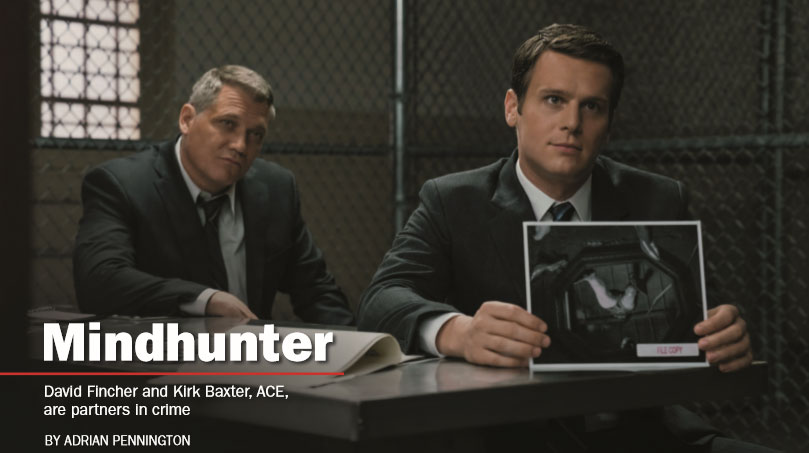 David Fincher masterminded Netflix’s launch into original TV drama as director of House of Cards’ first two episodes and executive producer of all 65 to the end of season five. Could he repeat the same critical acclaim with Mindhunter, a Netflix series about serial killers?

Fincher has mined this territory before, of course, in features such as Se7en, The Girl with the Dragon Tattoo and, most pertinently, Zodiac with which Mindhunter shares a fascination for complex and open-ended investigation (led by journalists in the case of 2007’s Zodiac) and a 1970s milieu.

Kirk Baxter, ACE, was additional editor on Zodiac and has been Fincher’s main collaborator in the cutting room ever since, including House of Cards and on features including The Curious Case of Benjamin Button, Gone Girl, Dragon Tattoo and The Social Network, the latter two winning him the Academy Award® with Angus Wall, ACE. 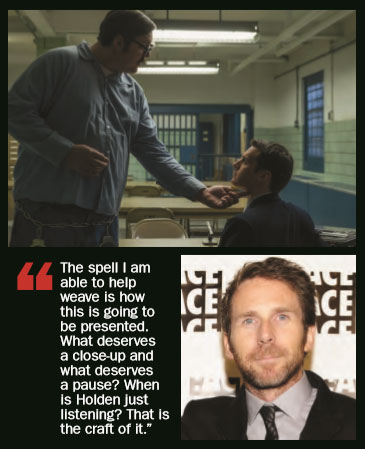 “David and I have done so many projects together now that we’ve worked out our own shorthand – there’s not a lot of motivational communication required,” Baxter says. “A lot of the cast and crew need his attention or input in order to move forward; he’s overtaxed when shooting, so I strive to ask as few questions as possible.

He sees my job as being reactionary to the footage. He doesn’t want me to be particularly concerned about the original intent [of the material] because all that matters is what was captured, not what you wanted to capture.”

While Mindhunter displays the same meticulous visual detail, period accuracy and exacting color palette (this time shot by cinematographer Erik Messerschmidt) common to Fincher’s work, the approach to a story ostensibly about mindless violence is at pains not to show the results of that bloodletting on screen.

“The intent is to use the spoken word to describe and explore the violence and to convey the sense of fascination and horror we feel about serial killers as pragmatically as possible,” Baxter says. “I imagine someone else might have decided to recreate the murderers in flashback scenes, but David has taken an academic and psychological approach.” Most of the drama in Mindhunter comes from the characters’ experiences in very long and complex interview scenes. Baxter likens the editorial approach to The Social Network: “The editing process is really mostly constructing dialogue rather than action scenes.”

The show, produced and partially directed by Fincher (with Asif Kapadia, Carl Franklin and Andrew Dominik also directing), follows FBI agents Holden Ford (Jonathan Groff) and Bill Tench (Holt McCallany) as they crisscross the U.S. interviewing serial killers and cops and recording their responses. They are joined by Wendy Carr (Anna Torv), a psychology professor at Boston University, who helps them develop a system to categorize the killers and possibly predict future behaviors. The story is based on the nonfiction book, Mind Hunter: Inside the FBI’s Elite Serial Crime Unit, by former FBI agent John Douglas.

Scenes are extremely measured and nuanced with barely any use of handheld or Steadicam (with the exception of two shots in episode 10). “Incarcerated serial killers aren’t in a rush,” says Baxter. “There’s a slow steady pace to them.” This is especially evident in scenes featuring murderer and necrophiliac Ed Kemper (Cameron Britton).  “The power in his scenes [is] heightened by Kemper controlling the pace in the room. It is Holden who seems the most anxious in revealing his desire to extract information while Kemper is the wise owl choosing what he wants to share. He controls the tempo.

“The spell I am able to help weave is how this is going to be presented. What deserves a close-up and what deserves a pause? When is Holden just listening? That is the craft of it.” Of course, the story is being told over approximately 10 hours, as distinct from being contained within a single feature. “Typically, with a film you are looking for what can be removed to reduce screen time without breaking the story. What dialogue can be removed or what scenes cut in half. That’s not a process we went through here. We can afford to let things take their own course, you aren’t under the same pressure to speed the story up.

“That said, there are different tasks such as having to add in scenes written late in the game.” A travel montage in episode 2 is one example. The idea of depicting Holden and Tench on the road came to Fincher late in the day from Douglas. “He had seen a cut and suggested that we didn’t quite convey a sense of how awful it was to be living on the road between motel rooms, so David shot many setups to convey this.

There was actually a lot of pleasure in editing that montage to the track, “Fly Like an Eagle” [by Steve Miller Band], and finding a home where this additional scene would work.” The structure of the series is generally linear, shorn of the flashback sequences with which the same material might have been treated in other hands. However, the introduction of the BTK Killer (who murdered 10 people between 1974 and 1991) originally planned for later episodes was brought right to the front as a recurring motif.

“BTK was a completely separate storyline of a mysterious person intending to commit crimes but it wasn’t yet clear how this was going to fit in a way that wouldn’t confuse the viewer,” Baxter explains. “Would the viewer be asking if this character had something to do with what [the] FBI are currently searching for?

So, we added BTK as a place setting at the beginning of the episodes before the title sequence [in which images of death flicker briefly on screen over the careful loading of a reel-to-reel tape machine] so that it didn’t get muddled with the storyline, with the exception of the last episode when the BTK character burning his drawings closed the season. That was Steven Soderbergh’s idea, and it was a good one I thought.” Fincher directed episodes 1 and 2 and the last two shows, all edited by Baxter, who then took a supervisory role of the other episodes. These were cut by the late Eric Zumbrunnen, ACE (one episode); Byron Smith, ACE (two episodes); and Tyler Nelson (four episodes). Sound designer Ren Klyce supplied atmospheres and tones, many from the making of Zodiac, which editorial used as placeholders.

“David wanted to be really accurate in terms of place and time so that meant not using any music after the period in which it is set,” says Baxter. “Jason Hill provided the score and was constantly sending through tracks for us to choose from.” The Led Zeppelin track, “In the Light,” which featured at the end of episode 10 was sourced by Baxter for a scene in which Holden visits Kemper for the last time.

“I really love watching this scene. I enjoy the spatial ballet of its blocking. Starting wide and moving closer as the intensity grows when Holden enters into the killer’s physical and mental space. Then Kemper gets out of his hospital bed threateningly, allowing me to widen out all over again, then I start to gradually tighten the framing choices as Kemper moves closer and closer to Holden until he ultimately engulfs him.” He adds, “I find scenes like this, with multiple angle choices, at times easier to construct than scenes where there is little coverage or movement.

When you have a simplistic scene with dialogue between two people and there is nowhere to hide in the dynamics of film editing, everything lives or dies on the performances being emotionally exact. Simple can take a lot of excavation at times.” While Fincher’s perfectionism put the team’s work under as much scrutiny as on any of his features, and the sheer number of hours needed to put it together was “exhausting,”

Baxter says he is pleased with the result. “I’m told the show has been received very well. Early on I read a reasonably harmless criticism of a music choice I’d made in Mindhunter that made me instantly loathe the author and I deleted that article and never read another review,” he says. “I understand with reviews that if you want to accept the good then you have to also accept the bad, but when you are waking up every day with the work on your mind and it’s there when you shower and when you commute and then there comes a point when it’s released and you can no longer influence it. Then it no longer belongs to you. Sometimes you welcome that and sometimes you don’t.”