In Memoriam- William B. Stich 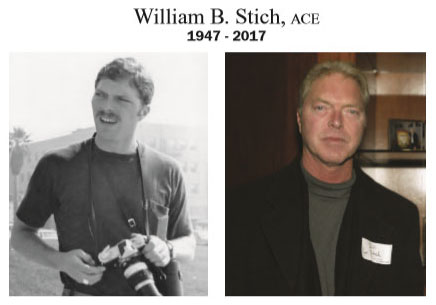 William Britton Stich, ACE, passed away after a battle with cancer at his home in Sahuarita, Arizona, on Dec. 17. He was 70.

Born in Lancaster, Wisconsin, Stich spent his childhood in Bakersfield, Calif., where he attended Bakersfield High School and was active in football, basketball and track. He continued his education at Bakersfield College.

I only met Bill once, which is strange since our careers were very similar. We both joined the Air Force in the ‘60s, served in Vietnam at Tan Son Nhut, were discharged as Sergeants and went into the film business at about the same time. Antonioni film Blow-Up was a great inspiration to Stich. After seeing the film, he bought himself a camera and became passionate about photography, shooting extreme angles like David Hemmings did in the movie. His passion was to extend into his editing.

After the Air Force, Stich returned to Bakersfield College and then transferred to USC and graduated from its School of Cinematic Arts. There he learned and developed a love for editing. He began editing for his fellow students and was thrilled to discover that this was a career he could go into in the film industry.

Bill started at Warner Bros. in the mail room, the typical entry-level position at that studio. Many of the clerks sat around talking about the great movies that they would make, but not Bill. As an active person he was always willing to jump on the bike and deliver messages and mail. He became well known and appreciated. He soon was moved into the editing department. His friendly personality and willingness to work allowed him to move up to editor.

Stich received six Primetime Emmy® nominations and seven ACE Eddie nominations. He won an ACE Eddie for Fatal Vision, a television miniseries that he edited with the late Parkie Singh. Among his other credits are: The Sopranos, Fantasy Island, T.J. Hooker, Homefront, Knight Rider, The Young Riders, In the Heat of the Night; and such TV movies as: The Lost Battalion, Brotherhood of the Rose, 44 Minutes: The North Hollywood Shoot-Out, Master Spy: The Robert Hanssen Story and Deadly Medicine.

Bill was loved by his friends. Much of the content of this memorial was given me by his friend, Ron Kelly, who explains, “He was outgoing, friendly, upbeat, athletic, kinetic and always moving.”

He is survived by his wife, Linna; daughter, Candace; and granddaughter, Raelynn. –Jack Tucker, ACE