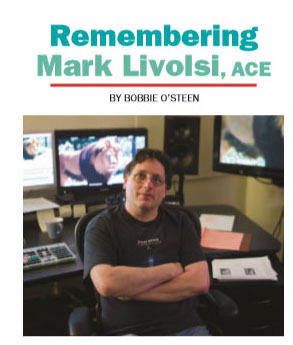 Mark Livolsi, ACE, a four-time Eddie nominee and truly cherished member of the editing community, passed away on Sept. 23 in Pasadena. He was 56. He left behind his wife, Maria, and children, Mark and Madeleine – and a remarkable body of work, which reflected a passion for editing and movies.

Livolsi always loved movies. As a child, in his Canonsburg, Penn., neighborhood, he would use his dad’s 8mm camera to make his own films. At Penn State University, he originally planned on studying aerospace engineering but soon switched to a degree in film. He gravitated toward editing, which Livolsi said, “was the one thing I could get lost in. It somehow just captivated me, the puzzle solving of it all just kind of thrilled me.

Two shots together creating a third idea just really struck me in a way that no other part of the filmmaking process did, so that’s what sort of focused me on becoming an editor, and from there I didn’t look to the left or right.”

Livolsi landed his first job in New York as a messenger for a company that made commercial films and then became an apprentice sound editor on Seven Minutes in Heaven. However, his goal was to be a feature film editor, and he landed a film-editing apprentice job on Wall Street.

On that film he met Joe Hutshing, ACE, who would become a mentor and lifelong friend. Hutshing remembers their first meeting: “I arrived in New York in the middle of a summer heat wave. When I got to the editing suite, someone was whistling a joyous rendition of ‘Sleigh Ride.’ I was delighted, as it was the middle of July and sought out the whistler. It happened to be the apprentice editor, Mark Livolsi. I introduced myself and we became immediate friends.” 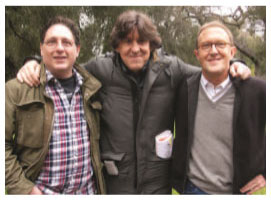 The following year Livolsi would become second assistant for another editor he considered a mentor, Alan Heim, ACE, on Funny Farm. “My assistant, John Hill, and myself were always worried that Mark would injure himself seriously on the film.

He got his finger caught in the coding machine and cut himself on splicers often enough that we bought a big first-aid kit for the editing room. Nonetheless, he was eager to learn and an excellent co-worker on the film and a valued part of our isolated editing room family in Vermont.”

Soon after, Livolsi worked for Susan Morse as an assistant on four Woody Allen films. She remembers that “he inherited his father’s talent as a caricaturist and illustrator and prepared for his son, Marky’s, birth by painting Peanuts characters on the walls of his room.

His obituaries tried to capture the magic he was able to create as a film editor, but I will always remember him first as a kind, warm, empathetic and generous friend.” On Crimes and Misdemeanors, Livolsi met first assistant Bill Kruzykowski. They would end up working on 15 films together. “Mark’s list of films is a testament to his talent and drive to achieve the best that most of us wish could be possible.

His strength and mostly his generosity was always a constant force of support for those of us who were lucky to work beside him. The open collaboration that he offered to us was very rare to find in any work environment. And let it not be forgotten, the great joy and fun that he brought to every day.” Livolsi returned to work with Hutshing on The River Wild and then French Kiss.

“When Mark became my first assistant, I found it very useful to show him my first-pass scenes before I showed them to the director. His notes were always excellent and made my cuts even better. But after letting him edit a few scenes on Almost Famous as well as place some key needle drops … I realized he had a true genius for editing. It was then I decided to give him the opportunity to be a full editor on Vanilla Sky. We shared a front credit on that film, and he was off and running.”

Livolsi’s family ended up settling in New Jersey, but – because of the opportunities that were being offered to him in California – he often performed the juggling act that so many editors can relate to: working on one coast, while raising a family on another.

As Heim recalls, “He cared enormously for his family and remained a resident of New Jersey for a very long time, making trips back from Los Angeles as his career expanded.” His wife, Maria, confirms that “Mark had a very singular passion in life: movies. Everything he talked about, collected or planned for revolved around movies; whether through his collecting, the music he listened to and ultimately the career he pursued, he fulfilled his passion in all aspects of his life.

And true story, from the first day we met, I told myself Mark is going to make his mark on the movie industry! Truer words were never spoken. Love you and miss you deeply and forever, Mark.”

During Vanilla Sky, Livolsi found representation with Hilarie Roope, who also became a dear friend. “He had the biggest heart of anyone I knew and was a true artist with his pure, authentic way of storytelling. He was able to intuitively see the tiny little moments of the actors’ performances in the dailies and create real people.”

Hutshing says that, “In addition to his gifts as an editor, his sweetness of disposition, grace and wry humor endeared him to every director he worked with and made it difficult for them to want to work with anyone else.” After Vanilla Sky, Livolsi would edit again for director Cameron Crowe on Elizabethtown and
We Bought a Zoo.

He said working with the director was his favorite part, that the energy of collaboration was the most fulfilling. Crowe has this to say about Livolsi:

“He was more than an editor.
He was more than a friend.
He’s our brother.
In fact.
Mark will never live in the past tense.
He’s still with us, always.
His heart.
His laugh.
His soul.
His love of Godzilla.
He is your best partner on the grand creative journey.
He knows the big picture stuff.
And the importance of the small picture stuff.
And how to make your life better.
Just knowing him.
We love you Mark.
Always.”

Mark would go on to edit multiple features with many other directors: The Blind Side and Saving Mr. Banks for John Lee Hancock; Wedding Crashers, Fred Claus and The Judge for David Dobkin; The Devil Wears Prada, Marley & Me and The Big Year for David Frankel; The Jungle Book and upcoming The Lion King for Jon Favreau.

Livolsi edited many successful comedies, which would often require, as he said, a “breezy and fast-paced” approach, but he also had the sensitivity and courage to create an emotional effect by “stopping and letting something play out.” He described the scene in The Devil Wears Prada where Meryl Streep is “having her breakdown on the couch … and, yes, here was a point when I had cut it and it was so unlike the rest of the rhythm of the movie, that I was a little worried. Are people going to be bored, are they going to be distracted, are they going to wander away because I’m not cutting? But the truth is that is one of the scenes that kept them in their seats … It’s not about the rhythm of the cuts – those can facilitate, those can help, but really it’s about what’s in the shot, what’s happening, what’s being said.”

When Livolsi went to work on The Jungle Book he relished the opportunity to stretch himself on a film that used CG animation, but he felt he was hired because of his live-action background, and he discussed his ability to find truthful moments. Adam Gerstel, who was second editor on The Jungle Book and co-editor on The Lion King considered Mark “a great friend” and “inspiring mentor .

His cutting room was always a joy to be a part of. With a great sense of humor, Mark never took anything too seriously. When it came to the edit, Mark had a wonderful sense of performance and rhythm. His work clearly shows what a talented storyteller he was. No detail was ever left unattended.”

Livolsi was also able to become a mentor to his son, Mark, who worked as a production assistant on The Jungle Book and assistant visual effects coordinator on The Lion King. “My dad was many things in life: a talented creative, an avid collector and a wise father, to name a few. Most of all, though, he was my best friend: someone I knew I could count on to stick by me through thick and thin, someone to laugh with and to pick me up when I was down. I will forever miss our daily conversations – even when there was nothing to talk about, somehow we found a way to entertain each other.

Though my heart breaks knowing I will never have another conversation with him again, I will forever treasure the memories of our time together, and strive for the bright future I know he would have wanted. I love you, Dad”

Livolsi’s daughter, Madeleine: “Anyone that knew my dad knew what an incredibly talented and genuine person he was. I was lucky enough to experience that as a child, and I’m so sad I will never experience it again. I will forever cherish my time with him, like the early Saturday mornings when the rumble from the surround sound in the basement would wake me up, and we would yet again pick up our routine of watching old horror movies together before anyone else in the house was awake. Sadly, he didn’t know how much he shaped me to be the person I am, and how proud I am that I’m so much like he was.

Later in life, we would play ‘Guess That Tune’ after dinner and he would be amazed that I knew unconventional songs and artists, but of course I knew them because he was my dad. I’ll never forget the silliness and craziness that came with having him around, even if I didn’t get to see him all that much. I had an amazingly happy and goofy family, the core of which is no longer here. I miss you every day, every hour, every minute Daddy, forever and ever.”

The artist and man are inextricably intertwined. Mark Livolsi’s warmth, humor, generosity of spirit and unerring kindness left an indelible impact on his films and on everyone who was fortunate enough to have known him. He will be missed but, most assuredly, never forgotten.