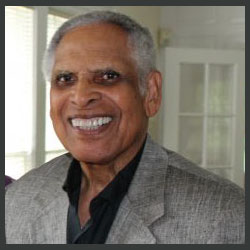 John Carter was born in Newark, New Jersey to the proud parents of William and Marie Carter on September 22, 1922. He was the third of four children. His family moved to Asbury Park, New Jersey in 1927.  He was an athlete on the basketball, football and track teams at Asbury Park High School and an avid swimmer during the summer months along the Jersey shore, he was a member of Mt. Pisgah Baptist Temple where he acted in religious plays directed by his father.

In 1943 he was drafted into the U.S. army where he served during WWII in Europe as a staff sergeant earning the Soldier’s Medal of Valor, American Service Medal, World War II Victory Medal, European African Middle Eastern Service Medal and Good Conduct Medal.

After his honorable discharge in 1946 John trained at the New York Institute of Photography and the Brooklyn Institute of Motion Picture Production. Upon graduating, he went into an apprenticeship program at the Signal Corps Pictorial Center for film editing.  During this time, he met the love of his life Carole at a dance in Harlem at the Hotel Theresa on the top floor in the Skyline Ballroom. They were married on August 22nd 1954 in Idlewild, Michigan. In 1956 John left the Signal Corps and was hired by CBS-TV, becoming the first African-American film editor to be employed by network television in New York.  For the last four of his twelve years with CBS, he was the supervising film editor for the award-winning documentary unit, Eye On New York. In 1968, John left CBS to form his own company John Carter Associates, Inc.

His first film was “Paper Lion,” about George Plimpton and staring Alan Alda.  He then went on to work on many other films including the documentary “King: A Filmed Record…Montgomery to Memphis, in 1970 that was nominated for the Academy Award for Best Documentary Feature.  He was also the editor for the original film “Solomon Northup’s Odyssey”, directed by Gordon Parks which was later made into a film called “12 years a Slave”.  John has mentored many young film makers and has worked with many prominent directors including Tyler Perry, Tim Story, Bill Duke, John Avildson, Elaine May and George Tillman to name just a few. You can go to the site http://imdb.imco/name/nm0141713/, to get a full list of John’s works. He was a member of: American Cinema Editors (the first Black ACE member), Academy of Motion Pictures Arts and Sciences and Motion Picture Editors Guild and the Westchester Clubmen. At the age of 85, John retired after editing more than 50 feature films.

John passed away at home peacefully on August 13, 2018, his enthusiasm for life, his deep dedication to his family, and his ability to forge close unique bonds with his many relatives and friends will be remembered and cherished.

The family expresses deep appreciation and sincere thanks for all the love and support given during this time of sorrow.