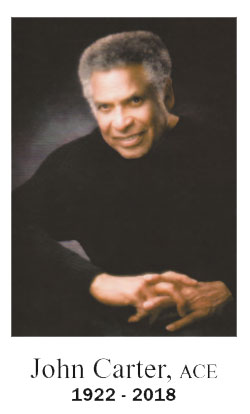 John Carter, ACE, who holds the distinction of being the first African American to be named a member
of American Cinema Editors, died at his home on Aug. 13. He was 95.

Born in Newark, N.J., he grew up in Asbury Park and was a member of the basketball, football and track teams during high school. In 1943 he was drafted into the Army and served with distinction in Europe. Having received his discharge in 1946, he trained at the New York Institute of Photography and the Brooklyn Institute of Motion Picture Production.

After graduation Carter began an apprenticeship at the Signal Corps Pictorial Center in film editing. He said, “I was drawn to film editing because it provided the opportunity to tell a story with pictures.”

In 1956 John became the first AfricanAmerican film editor to be employed by network television in New York when he was hired at CBS. Eye on New York was the CBS documentary unit and John worked his way up to supervising editor.

CBS proved a good experience and offered the chance to hone his skills. After 12 years, Carter left to form his own company, John Carter Associates. His first feature in 1968 was Paper Lion, which he edited with Sid Katz.

After the assassination of Martin Luther King Jr., producer Ely Landau approached Sidney Lumet and Joseph Mankiewicz about doing a film of King’s life. Paul Newman, Marlon Brando, Burt Lancaster, James Earl Jones and Harry Belafonte all came on board, along with John Carter. For King: A Filmed Record … Montgomery to Memphis, Carter received an Emmy®.

Milos Forman’s Taking Off was Carter’s next challenge. It required him to make the transition from the Moviola to the Forman liked Carter’s documentary work, but he preferred the linear flatbeds to the nonlinear Moviolas.

Among Carter’s many credits are Mikey and Nicky, The Heartbreak Kid, The Formula, Hemingway (TV), The Karate Kid Part III, The Five Heartbeats, Boomerang, Sister Act 2: Back in the Habit, Men of Honor, Barbershop and Madea’s Family Reunion.

In addition to ACE, he was a member of the Academy of Motion Picture Arts and Sciences, Motion Picture Editors Guild and the Westchester Clubmen. In 1984 Carter edited Solomon Northup’s Odyssey for director Gordon Parks on television’s American Playhouse. ‘

This is the story that was filmed a few years ago as 12 Years a Slave, by director Steve McQueen. His skill and dedication to his craft has greatly enhanced the films of directors including John Avildsen, Bill Duke, Elaine May, Gordon Parks, Stuart Millar, Tyler Perry and Reginald Hudlin.

His last film was 2006’s 5up 2down for Steven Kessler, and he retired at the age of 85. In 1981, when Karen Kalish first met John Carter she recalled, “I’d ask him what he does at his New York home, in between flying back and forth for his L.A.-based projects. He’d always say he was ‘just tinkering and fixing things around the house.’”  He made light of his helping other people though he mentored other editors and provided support and guidance to filmmakers.

Carter met his wife, Carole, while he was apprenticing in the Signal Corps and they had two daughters, Victoria and Carolyn; a son, John; and six grandchildren.