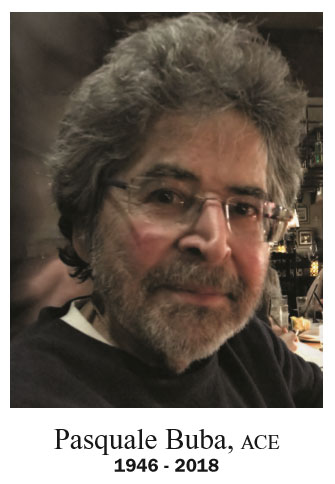 Pasquale Buba, ACE, passed away on September 12 from cancer after a brave fight. He was born in Braddock, Pennsylvania, a suburb of Pittsburgh on April 16, 1946, the son of Edward and Angeline Buba.

He was musically gifted and a career in that field seemed inevitable. He played the clarinet in an orchestra at Carnegie Hall at the age of 15 and received a full music scholarship to Carnegie Mellon University.

He was the first person in his family to attend college. Because of the university’s relationship with WQEDTV Pittsburgh he became interested in film. Many of the students interned at the station.

Buba worked there on Mister Rogers’ Neighborhood where he developed his editing skill. It was on that show that he met the love of his life, Zilla Clinton, whom he married.

He graduated with two Masters degrees – one in music and one in film. Music or film editing: What to pursue? Since there were only six major symphonies that interested Buba, he felt film editing would be a better career. He hooked up with another Carnegie Mellon graduate, George A. Romero and edited such films of the early 1980s as Knightriders, Creepshow, Day of the Dead, Two Evil Eyes, The Dark Half and Monkey Shines. He acted in Romero’s Martin and did double duty in Dawn of the Dead (1985) as both actor and editor.

With longtime friends John Harrison and Dusty Nelson he produced and edited the cult thriller, Effects, in 1980. Buba was incredibly creative and quick witted. He was kind and mentored and advised young filmmakers throughout his career.

He edited episodes of television series Tales from the Crypt and American Playhouse. In 1993 Buba returned to his hometown of Pittsburgh to edit the Bruce Willis thriller, Striking Distance. The following year he joined the editing team on Michael Mann’s Heat before going on to collaborate with the film’s star, Al Pacino, on Looking for Richard (1996) for which he received an Eddie Award for best edited documentary.

As directed by Al Pacino, Buba skillfully combined scenes from Shakespeare’s play with rehearsals of the actors, discussions among them and interviews in Pacino’s attempt to discover who Richard III really was. In 1997 he collaborated with Johnny Depp on The Brave. Depp directed and costarred with Marlon Brando. This was followed by Simpatico, Bobby Jones: Stroke of Genius and I Witness. Buba reunited with Pacino to collaborate for the documentary, Wilde Salome, in 2011, an exploration of Oscar Wilde and Salome.

In his passing Pasquale Buba leaves behind his wife, Zilla; his brother, Anthony; sisters-in-law Ozzie Cowan and Jan McMannis; and his brother-in-law, Joe Cowan; nieces Kelly and Jody; great nephews, cousins, countless friends and numerous godchildren who adored him. Zilla was by his side to the end.

He will be remembered for his great artistry that he put into his work and his willingness to share with other filmmakers. Those wishing to honor Pasquale’s memory can send donations in his name to the ACLU or any animal shelter. –Jack Tucker, ACE