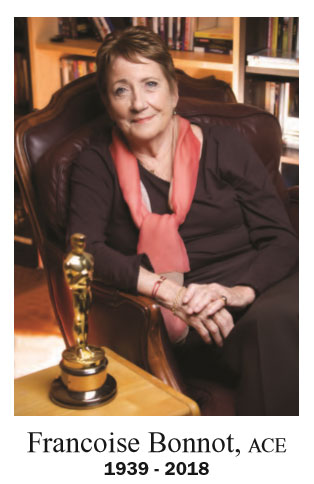 “Francoise’s career spanned more than a half century, starting before the French New Wave with her work for Jean-Pierre Melville. Her work was always full of energy, intelligent and skillful with an incredible mixture of tone. Much of her early work was groundbreaking, especially with Costa-Gavras’ Z.

Her editing for Julie Taymor elevated the films beyond expectation.” Francoise grew up in the editing room as her mother, Monique Bonnot, was an editor. She collaborated with her mother as assistant on Two Men in Manhattan; and as  co-editor on A Monkey in Winter, which was Francoise’s first credit as an editor.

She also married the film’s director, Henri Verneuil, and did three more films with him: Any Number Can Win, The 25th Hour and Guns for San Sebastian. With Costas-Gavras, she edited nine films including Z, about the takeover of the Greek government by the military; and Missing, the historical drama starring Jack Lemmon
and Sissy Spacek.

She collaborated with George Cosmatos on Massacre in Rome and The Cassandra Crossing. Additionally, she edited Year of the Dragon and The Sicilian for Michael Cimino; The Tenant with Roman Polanski; The Burning Season with John Frankenheimer; Black and White in Color for Jean-Jacques Annaud; and Fat Man and Little Boy for Roland Joffe.

In 1999 Bonnot began collaborating with Julie Taymor, first on Titus, based on the Shakespearean play, and then on Frida, about the life and career of Frida Kahlo and her volatile relationship with Diego Rivera. This collaboration continued with Across the Universe and The Tempest.

Bonnot is survived by a son, Patrick; a daughter, Sophie; and two grandchildren. She had a great sense of humanity and a heart full of love and a talent for capturing those magic moments that happen on a set. She cannot be replaced. –Jack Tucker, ACE