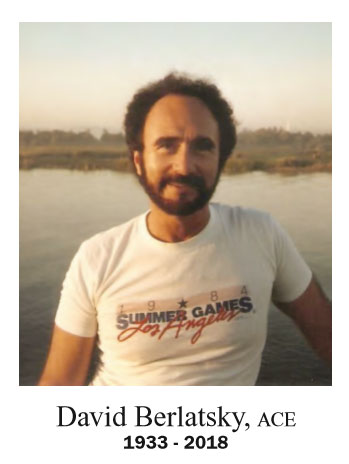 David Berlatsky, ACE, passed away on July 12 from respiratory heart failure. He was 85.

He dropped out of high school but earned his GED before joining the Air Force during the Korean War. He served as an instrument flight instructor teaching pilots how to fly blind by instruments alone.

He was stationed in Japan and Korea. After his service, he took up flying as a private pilot and for a number of years owned his own plane. When he came to Los Angeles he met his wife, Jackie, another Chicago native. Berlatsky was drawn into editing by editor George Amy. His wife was working as Amy’s secretary. He would come by to pick her up and sometimes he would have to wait while she finished a task. He struck up an acquaintance with Amy who one day invited him to visit the cutting rooms at the studio.

Berlatsky was drawn to the creative work he saw the editors performing. Amy was able to get him into the union as an apprentice. He became an assistant over at Fox on such television shows as Peyton Place, Lost in Space and Voyage to the Bottom of the Sea. He assisted Bill Mosher, ACE, on Judd for the Defense where he was able to move up to full editor. In 1969 Berlatsky moved into features when he edited the comedy, Viva Max, with Bud Molin, ACE. After an episode on television series Here Come the Brides he joined Dennis Hopper on the film, The Last Movie.

This was followed by The Jesus Trip, Kansas City Bomber, Hickey & Boggs and the very suspenseful television movie of the week, A Cold Night’s Death. Berlatsky joined the team of editors in 1973 on Sam Peckinpah’s Pat Garrett & Billy the Kid. The following year he edited Shanks for veteran horror producer/director William Castle. It was nearly Castle’s last picture and starred the famous French mime artist, Marcel Marceau.

In 1977 Berlatsky directed the independent action feature, The Farmer, which was a project he put together himself from finding the script, lining up the financing and the producers. It was picked up by Columbia Pictures and the studio assigned him to edit The Deep, Peter Benchley’s follow up to Jaws. He edited the miniseries, King, about the life of civil-rights leader Dr. Martin Luther King Jr. for which he received an Emmy® nomination for outstanding film editing.

Berlatsky tried putting together other projects and did direct a number of telethons, but most of his time was spent editing on such shows as The White Shadow, The Phoenix, Automan, Family Sins and Not Quite Human II and its sequel, Still Not Quite Human. He edited the episode, “Haven,” for the series, Star Trek: The Next Generation. Berlatsky volunteered as a deputy in the sheriff’s reserves along with a number of other editors. He was a dedicated member of his community and his craft.