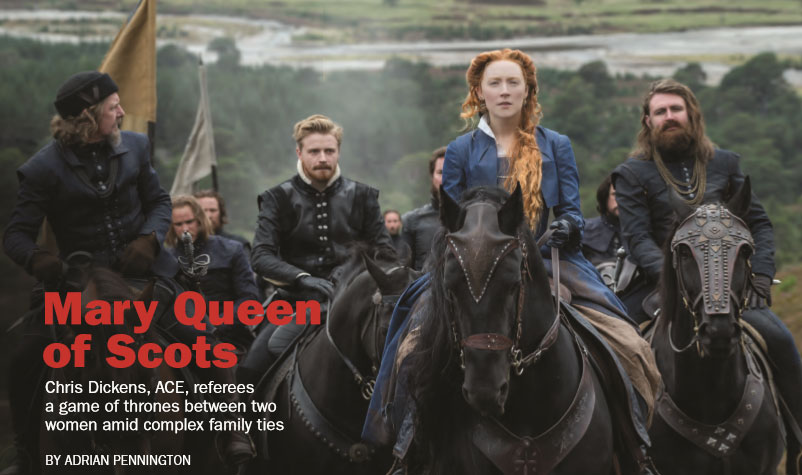 While Queen Elizabeth I has been depicted many times on film and TV – notably by Bette Davis in 1955’s The Virgin Queen and by Cate Blanchett in Elizabeth (1998), the altogether darker story of how she won the crown is less well known. Anyone growing up in England, however, will be familiar with Mary, Queen of Scots and her tragic role in the kingdom’s history.

A Catholic from the royal House of Stuart who grew up in France, Mary was forced to abdicate the Scottish throne after six years in 1567, aged just 24 and sought the sanctuary of her cousin, Elizabeth, south of the border. Continually warned of Mary’s apparent designs on her sovereignty, Elizabeth held Mary in captivity for 18 years before having her executed in 1587.

It is this determinedly dark tale to which the film Mary Queen of Scots returns. It’s not the first time the focus has been on the historical character. Vanessa Redgrave played the title role in a 1971 film of the same name which, like the 2018 version, was distributed by Universal. The new Working Title and Focus Features production marks the feature directorial debut of Josie Rourke, the artistic director of London theatrical company Donmar Warehouse.

Based on the 2004 book, My Heart is My Own: The Life of Mary Queen of Scots by John Guy, with the screenplay by House of Cards showrunner Beau Willimon, it promises to deliver political intrigue and Machiavellian plotting. The film stars Saoirse Ronan (Oscar® nominated for Atonement, Brooklyn and Lady Bird) as Mary and Margot Robbie (Oscar nominated for I, Tonya), and a cast that includes David Tennant, Guy Pearce and Jack Lowden.

Rourke has some extremely stable hands with her behind the camera, including John Mathieson, BSC (Gladiator, X-Men: First Class) and Chris Dickens, ACE, Academy Award® winner for Slumdog Millionaire, who also edited Tom Hooper’s Les Miserables and Edgar Wright’s Shaun of the Dead. Dickens says he was drawn to the project because of its strong female-centric story and the chance to work with a female director. “I have worked with women directors before – but not recently – and I was keen to see this particular story’s female focus not become eroded in the course of production,” he says.

The royal period drama takes us back to a remarkable point in history when Elizabeth was the first woman to rule England and Mary was the first Queen of Scotland. 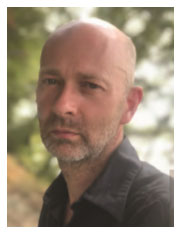 Pre-production on the show happened months before the #MeToo movement gathered momentum but the filmmakers were clear about drawing parallels with modern times. “You have to see the events of our story in the light of a society in which women in general had no rights to speak of. It was an entrenched patriarchal environment,” says Dickens. “To have women – and young women at that – in ultimate power was deeply disturbing to the male dominated court who clearly didn’t like this state of affairs.

Josie and I wanted to show what it was like to be a woman in rooms full of men who felt their political power being weakened.” He adds, “This makes the film different from a conventional period drama. We are depicting the reality of how men politically and socially had pushed women aside.”

There is no evidence that Mary and Elizabeth ever met in real life but in this story, they do. “Their meeting may be fictional but it is our stylistic way of dealing with the core of their connection,” explains Dickens.

“The more I talked with Josie about it the more we realized that the film is a psychological thriller. One scene that became a touchpoint for us in pre-production was in Michael Mann’s Heat, where Al Pacino and Robert De Niro’s characters meet for the first time. Until that point they have been chasing each other like cat and mouse. Each character is the mirror of the other – they both respect and fear each other. This was the key to our story.”

On another level the film is about the choices the two women made during their lifetime. For example, Elizabeth held onto power in part by never allowing men to compromise her while Mary was twice married and, the film suggests, paid the price for getting into bed with the enemy. Willimon’s script, though, gave few clues about the psychological relationship between the two women. “We approached the director’s cut with idea that each is the mirror of the other, that one affects the other’s decision making.

They constantly wrote to each other, love letters in many ways, so we’d try to link our main characters at every opportunity. At a basic level that could mean ending on a shot of Mary and beginning on a shot of Elizabeth where possible but also looking for performances in those transitions that mirrored each other or had the same thought going through into the next scene or sequence.” 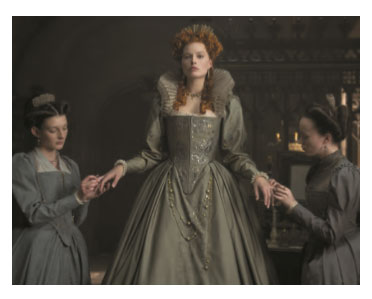 The filmmakers aimed to give the film a theatrical style to reflect Mary’s own love of putting on shows for her guests and its structure is very loosely based on Friedrich Schiller’s stage play, Mary Stuart, but this is not a Hollywood version of history like Rob Roy or Braveheart. To enhance the story’s contemporary feel, costume design included modern materials like denim and the sound design, including the score by Max Richter, blended synthesizers with traditional orchestral sounds. “We wanted the music to be very minimal, pared down to its constituent parts as an aid to identifying the psychology of these two women and the world they lived in,” says Dickens.

“Female vocals lent the film a more feminine feel. Although we liked that approach very much the studio felt it wasn’t melodic enough so we went back and combined it with a more thematic and upbeat musical tone.” On the performances, Rourke rehearsed extensively with the actors while Mathieson routinely shot with two to three cameras, giving Dickens lots of options. “The difficulty we had was in balancing the two performances.

The story is Mary’s and to an extent therefore this is Saoirse’s film but Elizabeth is such a wellknown historical character whom people imagine to be a very confident personality. Margo didn’t play her like that. She played her as a much more fragile woman understanding that the events in the film are about Elizabeth’s progress toward the powerful regent we know from the movies.

“We felt we had to do justice to this interpretation yet every time we put more of Elizabeth in, it damaged Mary’s story.
It was an extremely fine balance to add in subtleties of each other’s performance without overbalancing the story. “When we screened the film we found a fairly strong reaction against the character of Elizabeth because people felt she was too fragile and not what they expected. But to us that was the point, so we kept it that way.

This is a new story we are telling.” The first cut was 2 hours and 40 minutes – a length which proved hard to reduce. “The longer cut had every nuance of performance and character and crucially it had heart but it didn’t cohere as a story. When we cut it to 1:48 no one was happy with it. The shorter length was technically better but it lost out emotionally. I revisited the original cut and gradually leached back more of the lighter touches and subtlety of performance. Even though we end up with a pretty tight two-hour run time I hope that the elements we retained give us the emotional impact at the end. The story is, after all, a kind of Shakespearean tragedy.”

Dickens was on set at Pinewood and on location in Scotland for the majority of the shoot, which helped the first-time director get to grips with the process of feature production. “I’d send Josie what I’d shot the previous day and she would give me notes from which I’d make recuts all the way through. I felt like I wanted to get something very quickly in front of her eyes that felt reasonably polished so she had confidence in it.” He commends his editorial team of first assistant Deborah Richardson, second assistant Katrina Annan, third assistant Victoria Blackwood, trainee Paolo Magni and VFX editor Andy Hague.

Dickens also directed some second unit pick-up shots and advised on additional dialogue. “When you’re dealing with medieval England, its peculiar form of politics and even the way people speak, you have to work harder to make sure the audience follows what is going on. We added some exposition to the dialogue, careful not to spoon feed the audience.” He adds, “Although I’m too close to it just now, I know that this has something very distinctive about it that could have not come from being directed by a man.”