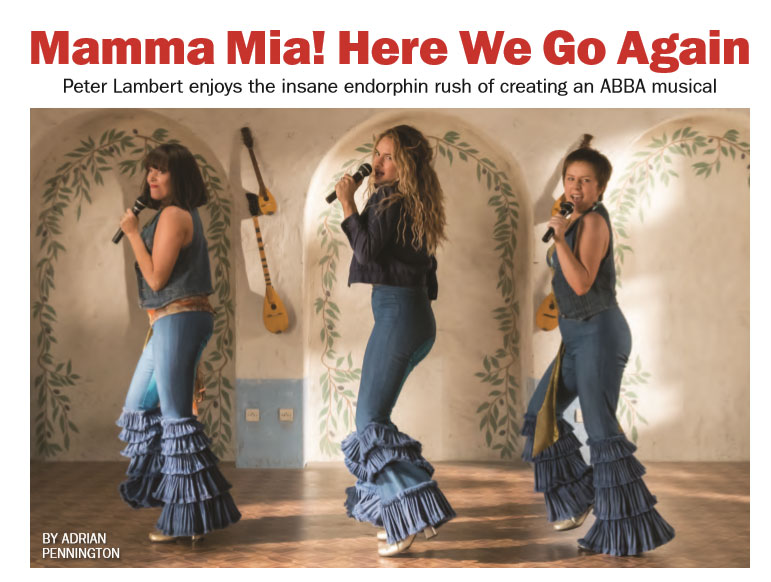 While the worldwide stage production of the smashhit jukebox musical based on the songs of ABBA has raked in “Money, Money, Money” (over $2 billion and counting) since its debut in 1999, the success of Universal’s 2008 feature adaptation is generally described as ‘unexpected.’ It’s not clear why this should be so, given the widespread popularity of the Swedish group’s songs but perhaps it was the idea of stars Meryl Streep, Colin Firth and Pierce Brosnan duetting which astonished critics.

The original amassed over $600 million from a $52 million budget and with so many ABBA films in the locker it makes perfect sense for Universal to reunite most of the cast for Mamma Mia! Here We Go Again.

Universal tasked Ol Parker (writer of The Best Exotic Marigold Hotel and its sequel) to write and direct the follow-up. As part of his team he requested editor Peter Lambert (The Death of Stalin), with whom he had worked on his previous directorial effort, Now Is Good.

“The aim was to capture all the joy of the first film, but at the same time, avoid the sequel feeling like it’s treading water from a narrative point of view,” explains Lambert. “I suspect that this is the challenge of any sequel: to give the audience the same emotional response that they had when watching the original, without feeling like you’re just rehashing things.”

Much of the pre-production discussion between Parker and Lambert was about how the transitions between storylines – which go back and forth in time – might work editorially. “Should the shifts between timelines be fluid or jarring?

When should the transitions draw attention to themselves, and when should they be discreet? Since the movie wasn’t filmed chronologically, it was helpful to have all this mapped out in advance of the shoot.” With Yeoman, there were discussions about how distinctive the two time periods might look. At one stage, there were thoughts of shooting one strand on film, the other digitally. In the end, they opted for something more understated, with both time periods shot digitally, and the difference between them indicated more subtly through lighting, design and costume choices. This is the first out-and-out musical Lambert has edited, although of course, editors will find themselves working extensively with music when cutting any film. “The things Ol and I are thinking about in the edit are the same as on any movie: Is each scene working at maximum capacity, are the performances consistently strong, is the tone correctly calibrated throughout, and so on.

There’s inevitably a lot of talk about rhythm, but that too is a familiar aspect of any edit,” he says. “In some ways, it strikes me that editing a musical is not unlike editing an action film – paradoxically, given that they’re targeted at such different audiences.

You have these big set pieces that work almost as self-contained units with their own internal rhythm. And then you have the bits of talking in between. And you’re trying to integrate the two different elements as fluidly as possible, so that the finished product feels like one coherent, well-balanced story. “In terms of pacing, our main concern is that each song should drive the plot forward.

We’ve tried for the most part to avoid that thing you get in some musicals, when a character starts singing, and the story grinds to a halt until they’ve finished the number. In general, you want your characters to be in a different place, emotionally or narratively, at the end of the song than they are at the beginning. If that’s not the case, it has to be a pretty fabulous song to sustain the audience’s attention.”

Of course, what delights audiences is hearing favorite ABBA tracks including “Waterloo,” “Dancing Queen,” “Angeleyes” and “Thank You for the Music.” Choreography is by Anthony Van Laast who choreographed the stage play and the original film. In some cases, the way the camera moves throughout the scene is choreographed as carefully as the movement of the actors. In those cases, Lambert hung around in rehearsals before principal photography, looked at storyboards, and discussed how the shot might work with the rest of the creative team. In other cases, it was more appropriate to the energy of the song to set up three or four cameras and let the actors just go for it. Lambert explains, “They would perform the routine many times, filmed from multiple angles. To help manage the substantial amounts of footage this approach generated, my assistants prepared the dailies in a way that allowed me to instantly assess what was available and quickly compare options for any given moment in the song.

“Even with extensive coverage, I found that assembling the musical numbers was initially easier than cutting a conventional dialogue scene. You can edit a dialogue scene five different ways, and none of them will be definitively superior to the others; they simply serve different dramatic purposes. Whereas with the songs, it seemed to me easier to look at the dailies and say, ‘This is the best take for this particular moment, and this other take is the best for the moment after, and this is the best way for me to cut between them.’”

So, although it took some graft and a fair amount of time, coming up with a functional first assembly of the songs felt relatively straightforward. By contrast, re-cutting the songs turned out to be more complicated than reworking dialogue scenes. “You can’t make small trims without messing up the rhythm of a song, and of course you’re tied to the actors’ lip movements – meaning you can’t easily repurpose shots, or move them out of their original context, in the way you can in a conventional scene,” Lambert says.

“Cutting up the songs, shuffling them up and piecing them together again involves a lot more chicanery than a standard dramatic scene. “I was cutting the songs to prerecorded guide tracks, performed by the actors in a studio in advance of the shoot.

Since my initial assemblies utilized very little production sound, there was a danger of the songs feeling like music videos, with the actors miming along to their own voices. The assistant editors and I spent a lot of time adding atmospheres and effects to bring the first assemblies to life.” Lambert commends the team, including first assistant editors Andy Jadavji and Kindra Marra, second assistants Monika Radwanska and Jonathan Thornhill, VFX editor Andrew Loschin, as well as UK trainee Jena Cheung and Los Angeles PA Stephanie Snowden.

“The assistants also had a little foley thing going on in the cutting rooms, recording their own steps and clothes,” he adds. “It’s amazing how effectively you can trick the brain into believing someone is singing live, simply by adding the sound of their body movements subtly in the background.” The cast recorded the songs in a studio in advance of the shoot. 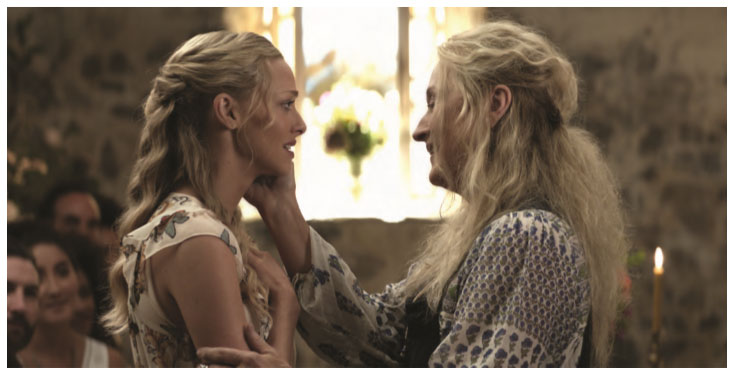 The songs were roughly mixed, and then played back on speakers positioned off camera during filming, so the actors could sing along to their own voices. The mixes for the finished movie will be a combination of the original studio vocal performance, some ADR picked up in the studio after the shoot, and when possible, a bit of production sound thrown in for good measure. “I am reliably informed that it will look and sound awesome,” he jokes.

While the location shoot was in Croatia, Lambert was based in London, communicating with Parker daily and flagging any issues. “I visited Shepperton Studios from time to time while they were based there, to show assemblies to Ol, discuss whatever they were filming next, and to enjoy the insane endorphin rush that comes from watching an ABBA musical being filmed. And I went to Croatia once, to show a sizzle reel at the wrap party.

But most of the time I was in my dark room in Soho, looking at beautiful people on lovely beaches. “I’ve always liked ABBA, but over the last few months, I’ve come to adore them,” he adds. “I don’t have a favorite song: as far as I’m concerned, every track is a perfectly-constructed little parcel of joy.

A person who dislikes ABBA dislikes happiness itself. If you are such a person, I urge you to seek immediate psychological evaluation.”