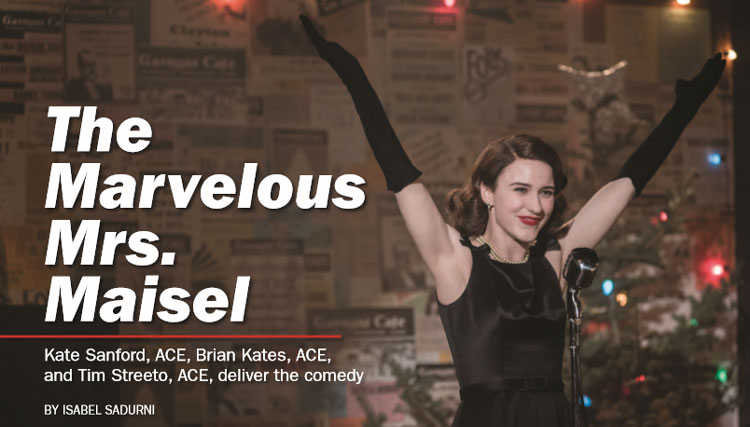 In the world of Amy Sherman-Palladino and Daniel Palladino’s ’50s-set comedy, The Marvelous Mrs. Maisel, Miriam “Midge” Maisel (Rachel Brosnahan) is a woman of upper-middle class Jewish New York background who is unexpectedly left by her husband of four years and, with newfound opportunity, turns years of carefully-honed homemaking skills, charm, wit and energy into something more self-satisfying: a career in comedy.

The New York-based editorial team behind season 1 included Brian Kates, ACE, (an ACE Eddie Award winner for Bessie and Lackawanna Blues and Emmy® winner for Taking Chance), who edited the pilot; Kate Sanford, ACE (an ACE Eddie Award winner for The Wire and Treme); and Tim Streeto, ACE (an ACE Eddie nominee for Boardwalk Empire). Chris Rand was associate editor of the pilot, and Zana Bochar and Andy Pang, were assistant editors for season 1. The show was just nominated for 14 Emmys, including Brian Kates for the pilot: Outstanding Single-Camera Picture Editing for
a Comedy Series.

CinemaEditor: How did you first get involved with this project?

Brian Kates, ACE: I had just finished a mix, out at Skywalker Sound and got a call from my agent. I was skeptical that I was going to be the right editor because I usually work on features, but as soon as I read it, I wanted to do this. It was all pros and no cons: The writing’s great. The characters are beautifully rendered. And Amy Sherman-Palladino and Dan Palladino’s love for musical theater and sense of rhythm echoed my experience working with directors who straddle theater and film, like Moises Kaufman, George C. Wolfe and John Cameron Mitchell.

Tim Streeto, ACE: Kate and I knew one of the producers, Dhana Gilbert. She worked on Boardwalk Empire and Vinyl with us and she knew us and trusted us. I don’t know that they reached out to us as a team, but we met with Amy and Dan and they showed us the pilot and it didn’t leave you wondering if you were going to take the job or not. This was early 2017 when we had a new President and I was depressed and I recognized this is a hopeful story that I wanted to be a part of. Also, it was about a woman and I’d just come off a bunch of very male-centric things.

Kate Sanford, ACE: It’s wonderful to be working with a strong female showrunner, collaborating on a story about a woman. Amy and Dan are a brilliant husband and wife team, and their working relationship is very supportive.
Even though the story is set in 1958-59, Midge is a modern woman who I can relate to today because she discovers that having children and having a family is not enough for her. We watch her realize that she actually wants to have it all. 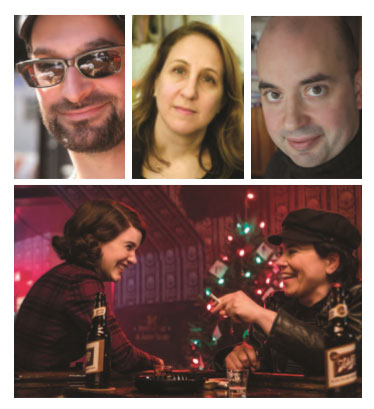 CE: Tell us about crafting performance and the life of the character TS: What appealed to me is that Midge is not disdainful of what a woman was expected to be during this era. She’s not a revolutionary in that way. She’s an incredibly smart woman who confronts gender inequality in the comedy world. … When you think about the performance, everything you need is in the footage. Rachel so fully inhabits the character and has the beats so beautifully composed. She’s always in high heels and gloves and hats and has all this mechanical business to take care of. I was on set when she and Candace were rehearsing to do the candy-sorting scene and they worked it through and had it nailed down before the cameras started rolling.

BK: It’s really choreography. There’s an aerobics scene that’s almost screwball how quickly words are being delivered while actors are performing physical comedy.  Our job was to fine-tune the performances while staying true to that rhythm.

CE: How did you support the rhythm, pace and tone of this world?

KS: The fast pace is an integral part of cutting the show and, I think, a part of the very fabric of the project for Amy and Dan, so we work really, really hard to keep that up. At the same time, we have to figure out where to land for some real human feeling. It’s our job to make sure every beat lands, and to invisibly speed things up where, let’s say, Amy would like the Steadicam to go even faster.

BK: I had a sense that I was going to be creating a rhythm that was faster than any ‘fast’ I had previously imagined. But it wasn’t necessarily to be created with density of edits but with density of movement, color, and sound design within a single shot.

TS: Amy will often shoot a scene as a one-er. They stage these complex shots and the camera’s always in motion.

KS: We also have an in-house visual effects team we work very closely with. Considering that the show is set in the 1950s, if there’s a shot that isn’t period correct, the visual effects team has to do a lot of cleanup. There could be a couple hundred VFX shots in an episode, but you’d never notice. Our VFX supervisor is Lesley Robson-Foster, and Tim and I worked with her on Boardwalk Empire and Vinyl. She’s amazing.

CE: What’s the most challenging part of putting this show together?

BK: The stand-up comedy performance scenes are covered documentary style, with two or three cameras shooting each take. Rachel’s performance might have many interesting variations, and there are choices to be made about pointof-view and shot size and distance and camera movement. So those scenes require a lot of construction.

TS: I think that aspect of the show does have roots in documentary because we’ve all seen filmed performances of Richard Pryor and other comedians where it’s shot like a concert.

KS: We’re doing very fine embroidery here. And as good as the jokes and performances are, they feel flat without a lot of well-crafted sound to support them. Building a dialogue between the performer and the audience and hearing people react to Midge gives the scene validity. We have to edit in enough sound to know that it’s going to work. Then our sound team will come in and perfect it.

TS: We should give a shout out to Ron Bochar who’s our sound editor and mixer on both the pilot and the series.

CE: Talk a little more about how the music plays a part in telling the story.

KS: When I saw the pilot, can I just say what an incredible job Brian did? One of the things that made me want to work on the show was how precise the editing was – how well picture and music worked in support of each other. I know
Brian is so good with music and loves to cut music. When I saw that musical beats and rhythms landed on picture in such incredibly specific and fun ways, I got right away that that’s what part of the editing work would be. We also have a music editor, Annette Kudrak, and Tim and I have worked with her a lot on Boardwalk Empire but we also do a lot of music editing ourselves and she helps us finesse it.

BK: Amy and Dan wrote every song in the pilot into the script, except for “Teach Me Tonight” and “L’Etang” by Blossom Dearie. We found those in the editing room, as well as the flavor and placement of the score. Suzana Perec was music editor on the pilot.

CE: What kind of pace do you have to keep in the edit?

KS: We try to keep up to camera and cut everything they shoot the day before. It depends on how much coverage there is and what type of scene it is. Typically, we have a few days after they finish shooting to complete our editor’s cut. They’re very efficient on set: They shoot a 70-80-page script in 10 days. They can cover eight to 10 pages of intense dialogue in one day and we have to keep up. Then, Amy and Dan will come in and work with us, but they’re also really stretched time-wise with writing future episodes or shooting, so we don’t always get them right away.

TS: Normally on a television show, you edit a cut with the director in four to five days and then producers come in and work on it with you for another four to five days and then you send it to network. But because Amy and Dan are both directors and producers on this, their directors’ cut bleeds into the producers’ cut. We usually push to get it to Amazon by a certain date or even ahead of schedule because, well, we have to move on to other episodes