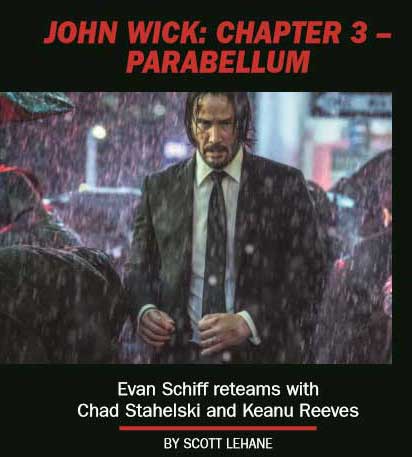 Director Chad Stahelski’s latest installment in the John Wick saga, John Wick: Chapter 3 – Parabellum, released May 17, sees the titular super-assassin played by Keanu Reeves on the run with a $14-million bounty on his head after killing a member of the international assassin’s guild. Suddenly, he finds himself the target of professional hit men and women everywhere.

Stahelski, who is also a renowned stunt coordinator, reteams with editor Evan Schiff, who edited John Wick: Chapter 2, for the latest installment. At crunch time, two additional editors were brought on to help – Matt Evans and Gina Hirsch. “They’re both friends that I’d known since I worked at Bad Robot as an assistant editor. And when it became obvious that I needed help, especially given our schedule, I was thrilled to be able to bring them on, and they were a huge asset to me and to the film itself,” says Schiff.

CinemaEditor spoke with Schiff just after they had signed off on their final theatrical deliverables – which included 5.1 and 7.1 mixes as well as Dolby Vision and Dolby Atmos versions and an IMAX version.

CinemaEditor: How did you get involved in this project and how long did you have to work on it?

Evan Schiff: Well, I edited John Wick 2. I got that one through my agent. The movie turned out great and I had a good experience working with Chad and everybody, so he invited me back for this one. I started about a year ago. I think May 1 was my first day of work on John Wick 3, so it was just a little under a year.

CE: Where were you based? Were you on set much?

ES: We shot in New York from May to mid-July. I was in New York the whole time for that. I brought my family over and put my kids in daycare. We had editorial offices in the West Village, and I would try to go to set twice a week. We also shot a third of the movie in Morocco, but the weather was too hot to go there right after we wrapped New York.

So we wrapped in mid-July from New York. We came back to L.A. We started editing the part of the movie that we had and then we waited until late October or early November to go back out to Morocco and shoot there for about 10 or 11 days.

CE: So you went to Morocco as well?

ES: I went to Morocco for about two weeks leading up to the shoot. I brought a hard drive with me and Chad and I continued to edit the movie. I was able to give the production crew references for what we had shot in New York – for costumes, or makeup, or special effects or wherever we needed to maintain some continuity. But then once they started shooting, I came back to L.A. It was more efficient for me to edit from my office here in L.A. than it would be for me to be on set trying to get dailies which were being processed in London. The logistics of getting dailies delivered back to me in Morocco would have been too challenging.

CE: And then, how soon after shooting were you able to get to work on the footage?

ES: We were cutting as we were going. But then it was sort of tricky to edit two thirds of a movie that we had in between our New York shoot and our Morocco shoot. We put that together as best we could, but the Morocco chunk is in the middle of the movie. We could get the beginning dialed in. We could sort of get the ending dialed in. But you couldn’t really watch the movie as a whole and get the whole thing dialed in. So there was sort of a lull in between the New York and the Morocco section, but after we got back from Morocco, it was just crazy from that moment until the end of the movie.

CE: What system do you edit on?

ES: We’re on the Avid Media Composer system. I like to stay current, so I’m always on whatever the latest version is and sometimes on a beta version.

CE: Maybe you could describe your workflow for me.

ES: Technically, we cut this in UHD. We got Avid DNX dailies in UHD 23.98. [Cinematographer Dan Laustsen, ASC, DFF] and the DIT spent a lot of time locking our dailies straight in on set. So by the time that I got footage into the Avid, just our dailies, sort of a onelight grade, already looked phenomenal. In fact, when we previewed for audiences, we didn’t do any additional color correction. We just played it straight out of the Avid with the grade that we had because it just looked so good.

Sound-wise, we were working with [supervising sound editor] Mark Stoeckinger at Formosa Group. We were able to send some scenes his way that needed some more intense sound work, whether it was gunshots or we have an underwater section. They would send us stems, either in the form of several mono tracks or often a 5.1 track. Then as we were cutting and doing previews, we would sit down and do a real mix on a stage for the preview and then we would get the full mix stem back from that. We would replace everything in our sound track with the stem and go forward from there, repeat that process again for as many previews as we had.

CE: What role did your assistant editors play in the process?

ES: In New York I had John Cook for dailies. He was my first assistant editor. And he got the show set up and organized. In between John and Nick Ellsberg, who was the second assistant editor both in New York and then also L.A., by the time that we had left New York, they had done such a great job already starting with our temp muzzle flashes and temp blood and temp sound effects for all the action scenes, that they really got us off to a great start.

By the time we started post-production on the director’s cut, a lot of that sound and visual effects work had already been started and was already in pretty good shape. Nick moved out to L.A. and continued on as the second assistant editor. Halima Gilliam came on as the first assistant editor, and then the two of them ran the assistant side of the cutting room, which as we got closer and closer to the finish, got the typical busy level that you usually find on a show like this, where everybody suddenly needs everything all the time. But they were really great at keeping everything running smoothly and making sure that everybody had what they needed and that the departments had what they needed to have in order do their work on the film.

CE: Overall, how would you describe the editorial style that you were going for?

ES: We try to stay wide and long, and only cut when something breaks in the take, or if there’s a need to highlight a particular move. Our paramount goals are to make sure that the audience knows that these are real people doing the martial arts and the action, these are real actors. You know Keanu, and [Halle Berry], they’re doing all of the action that you see on screen, so we don’t cut away. We live in an angle as long as we can, so that you can see that yes, it’s really them.

CE: So overall what was the biggest challenge that you faced?

ES: On this movie, we just had so much of a great thing, our biggest challenge was actually just cutting time out. You know, our assembly edit was around two hours and 45 minutes, and we were obviously aiming for lower than that. We had these great fight scenes, these great motorcycle chases, these great scenes with the dogs. We had a lot of world building and introducing new characters. And so we knew very early on that the movie worked, the movie was good, and so we weren’t really trying to fix anything, but we did need to get it down to a more palatable run time. So, a lot of heartbreak was spent trying to decide what to cut, and that was really most of it.

CE: What was it like working with Chad? How hands-on was he?

ES: He’s pretty hands on. We established a good working relationship on John Wick 2. He trusts me. He’s definitely the type of director that is interested to see what I come up with and he makes it really easy for me to pitch ideas. If I have an idea that’s slightly different from what he’s expecting, he’s completely open to that. He was a stuntman before he was stunt coordinator and executive director and now a director. He owns a stunt company called 87eleven and he teaches classes at the company every morning. So he’s got that experience and he knows what he’s looking at from a very specific technical level in terms of the fight choreography.

So, whereas I can tell on a broad level if something appears [off], there are other things that Chad is looking for. He goes through all the actions daily and starts looking for the takes where the fight choreography and the execution of the martial arts are really spot on. And then we’ll compare my cuts to his cuts and we will do a mix-and-match edit and then bring that back into my cut. And then generally once we’ve done that once or twice, the action scenes stay pretty locked. You find their rhythm and their flow early on. We don’t tend to go back a lot after that and revisit. They sort of live as they are.

CE: Finally, what do you expect audiences to take away from the movie?

ES: So I think we have something like nine major action sequences and a bunch of smaller ones. That was done intentionally. We set up our world; we set up the stage for John Wick. And this movie is supposed to be about seeing that through to the end, the consequences of the actions from John Wick 1 and John Wick 2. So really, once we jump in, we don’t let up and we’re action, action, action all the way to end.

Hopefully, that’s why people are coming to John Wick movies, and what they enjoy and take away from it.