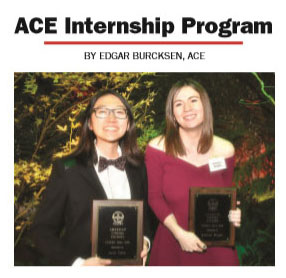 Wright remembers how she became aware of ACE and the intern program: “There was one day during school where we were analyzing film credits and how the style of them helps introduce and close the film. I asked my teacher why you would put ACE after someone’s name.

I went down a very deep rabbit hole after that. After stalking the different ACE editors and exploring the website I fell across the internship program. The same day I was begging my program director and the editor I had worked for on Fox Hunt Drive to write me recommendation letters.

The program was everything I needed. It would take the basics I had learned in school, and expand my perspective on the roles in postproduction. I may have had a general understanding of editing, but I had no idea how much effort and work went into being the assistant, which was the first step I had to take.

“Throughout the application process, I was convinced I would not be selected,” she adds. “Even when I was a finalist (which is already a huge honor) I knew that I didn’t know nearly as much as the others. 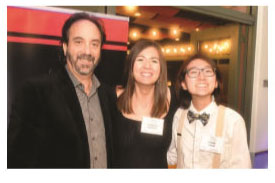 When I was driving home, I received the call from Tyler Nelson and Carsten Kurpanek that I was chosen. And so, the journey began.”

She soaked in as much as she could from the years of experience present around the table. She also spent a week with the editorial team of 6 Underground where she learned how to process dailies and prep them for the multiple editors working on the show.

Wright shadowed the editorial team of Marvel’s Jessica Jones. She got her feet wet in how to deal with dailies and organize them for the editor. The assistant editor would group clips together and mark them ‘action’ or ‘reset’ and create thumbnails. As an assistant you could then familiarize yourself with the footage and give the editor an opinion if that’s asked for.

Her second week was at Disney’s Stargirl where she learned the importance of editing sound effects to help to give an indication of how a sequence is going to evolve.

Both Chun and Wright were introduced to the advantages and intricacies of Avid’s ScriptSync, through which clips are organized in lined-script order, a very fast and organized way to get an overview of what was shot for a sequence. They also learned how to do turnovers and how essential these are for a smooth hand-off to all the facilities that take care of the post-production after editorial.

How important flawless turnovers are became very clear to both ACE interns when they spent their third week visiting Los Angeles-based post-production facilities. They went to a film lab, a sound studio and a visual effects studio that all needed to work with the flawless EDLs and AAFs supplied by the assistant editors of all the shows.

The interns watched sessions with a colorist, Foley walkers, sound mixers and digital artists. They saw the professional transcoding of dailies, learned how VFX can help pre-visualizing sequences and got a taste of how the cloud can help an editorial team to work remotely.

The last week of the ACE Internship Program involved shadowing a reality-show post-production team. Chun spent the week on The Voice, during which time she was amazed to see how organized the assistant editors needed to be in order to keep track of all the footage. “They used a whiteboard in the office to communicate tasks from day-shift to night-shift. They not only have to prep the footage, but also address media requests from producers.

Without a script to follow, the editor needed to create a story by combing through the interviews with the transcript and watching the footage. “After my week at The Voice, I’ll never be able to watch unscripted shows the same again,” she admits.

“There’s so much work that goes into creating the story. It was also amazing to see that even though there are so many editors working on the show, they make it look seamlessly cohesive.” Wright spent the week with teams from American Idol and the Academy Awards.

She enthusiastically recalls how this was a nonunion house, Sim Digital, so she had the opportunity to do some hands-on work: “I got to sync and group [15 cameras] on the Avid, working with managing assets, and creating outputs from the Avid. As a kinesthetic learner, this was vital to really bring everything together. The assistant spent a great deal of time illustrating to me how to handle playback for the editors with a tape workflow and conform.

Cutting multicam for reality is immensely different from anything scripted. It can be said that there is certainly a rhythm to it. Navigating 10-15 cameras is no easy feat, but the editors and their assistants here have mastered the way.”

For both interns the first step into the professional world of post-production will likely be an assistant position, so shadowing an editorial team and learning all the ins and outs are important aspects. But surely their ultimate goal will be to become editors themselves.

Then the creative part takes precedence. What have they learned about the creative side of editing? Says Chun, “I was indeed exposed to the creative sides of editing. On the scripted side, I learned that it really is important to watch all the dailies. You don’t want to miss anything and you want to be aware of what footage was shot. By attending the table read and tone meeting, I was reminded of how important communication is to collaboration in film.”

Adds Wright: “Watching all dailies was important for all editors. They form the sequence in their head, making sure that all the golden moments from production are included.” Both say they were introduced to valuable contacts and learned technical, organizational and creative information that will speed them ahead in their careers in post-production. They both recognize that staying in contact with others in the business is key.

Wright remarks that the one thing the ACE internship has taught her is that the post-production community here in L.A. is small. Everyone knows each other. The only way for the editors to stay sane is for them to stay connected.

“I think the most important thing for me is not only stay in touch with the different editing rooms I visited, but also stay connected to Irene, my fellow intern, and the other honorary interns, the people I met at the lecture series, and my mentors and guides through this journey,” she says. “I have a nice long list of contacts that I can call whenever I run into issues as a post-production PA or as an assistant editor.”

She plans to continue to grow her involvement in the community by attending upcoming events including EditFest LA. Chun is determined to do the same: “I’ll be holding up the social part of post-production by going to different mixers. I’ve been to every mixer I’ve been invited to since I’ve been an intern and it’s been really fun.

I also have a system set up so that I can remember to touch base with those I haven’t talked with for a while. I’ll be going to upcoming ACE events and will try to volunteer as much as I can in the years to come.” Chun, Wright and ACE wish to thank the people, productions and facilities that so generously opened up to make this once again a successful ACE Internship Program.