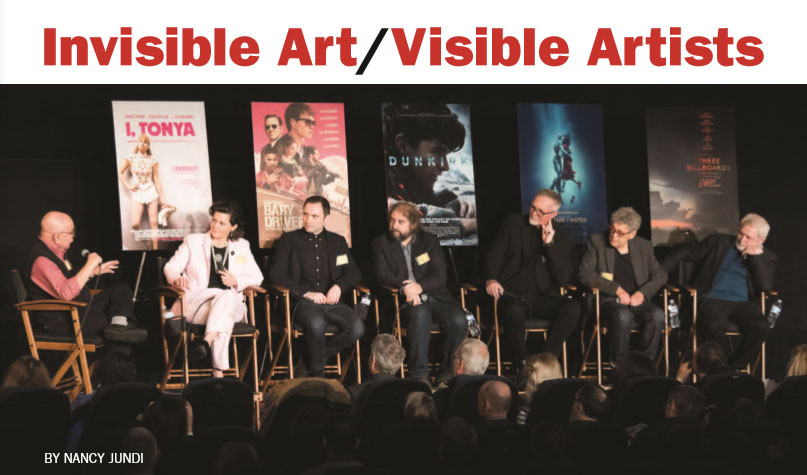 The annual Invisible Art/Visible Artists panel featuring the year’s Oscar® nominees for Best Film Editing was held March 3 – the day before the 90th Academy Awards® for a capacity crowd at Hollywood’s Egyptian Theatre.

Introduced by ACE President Stephen Rivkin, ACE, and moderated by ACE Vice President Alan Heim, ACE, the event was free and open to the public in the effort to continue educating both students and film fans about the art of editing. Riegel said for I, Tonya, it was challenging to get the tone right, as the story of disgraced figure skater Tonya Harding balanced some difficult, as well as comedic, moments. She also revealed that she actually studied political science before beginning her career as an apprentice working with Howard Smith, ACE, on River’s Edge.

The idea of reviving apprenticeships in the edit room received a hearty round of applause from the crowd. “I think an appren- ticeship is just a natural progression into assisting, a natural progression into editing, so yes, bring them back,” said Christopher Nolan’s longtime collaborator Smith, who took home the Oscar the next day. “The more the merrier. We call them PAs now – so why don’t we call them apprentices and then they’re in the union, which would be really good.” Three Billboards’ Gregory expounded upon the evolved role of the first assistant. “What the assistant does in the technical process depends on the kinds of films you work on budget-wise. So often we don’t have VFX editors and so the assistant is doing everything, sending lists here and there,” said Gregory. “I love to involve my assistant more into the actual film, to hear their opinion.”

Machliss and Amos shared that while filming musical action film Baby Driver began in February of 2016, they had initially begun layering the music for it during 2011. Director Edgar Wright had been selecting songs for the film that Machliss then treated like a DJ might in making sure elements rolled into one another.

“Edgar did a table read,” recalled Machliss, “which I then took with the music and sound effects to basically make a 100-minute radio play of Baby Driver so you could actually listen to the whole thing and imagine the car chases in your head. That of course led to a lot of animatics work between our animatics editor, Evan Schiff, and Edgar. The two of them did a lot of work to cut those original sequences to show a sort of proof of concept and to get Edgar’s vision. It’s so important on films like this to get teams involved, and picture cutting can help to inform so many other departments.”

“The animatics,” Amos added, “were built to show the journey of the car through the streets, but when you film the actors you can’t place them into the animatics so you have the additional character story and that’s where the complexity of the sequence comes in, because it all must be syncopated to the music. There were certain gags which had to be played at certain points in the music, so we were kind of constrained by this structure, which is unusual because as editors we tend to edit and someone comes in to score. In this instance, we were so tied to the music that compressing the material was the big challenge.” Smith admitted that WWII epic Dunkirk had very little dialogue for a feature, meaning that it was “almost like editing a silent film. Almost from the first frame you’re dropped into the action and there was no backstory or German POV. The ‘enemy’ is all they’re referred to and there’s no cutting to the war office or cutaways to explanatory sequences. You’re just with them. It was a time-bending scenario.

“I remember reading the script thinking, ‘I hope we’re not making a $100 million art film.’ This could have been a film that made no money, but it did do well and I’m so grateful a studio took the chance on this film.”