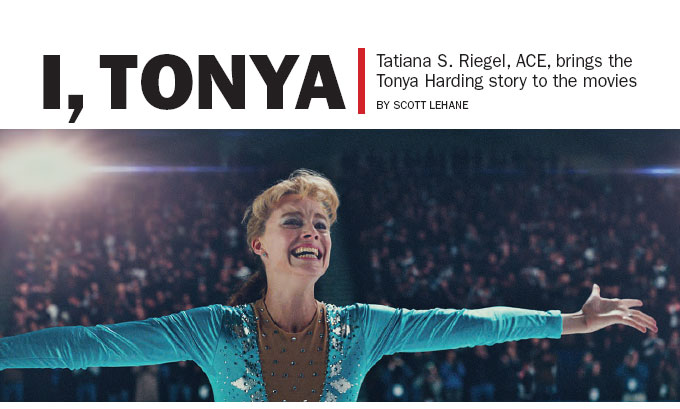 Director Craig Gillespie recently tapped long-time collaborator Tatiana S. Riegel, ACE, to edit I, Tonya – a black comedy-drama based on the Tonya Harding story, which stars Margot Robbie as figure skater Harding as she rises through the ranks at the U.S. Figure Skating Championships, only to see her future in the sport thrown into doubt when her ex-husband, Jeff Gillooly (played by Sebastian Stan) intervenes. I, Tonya is the fifth Gillespie feature film that Riegel has cut, after Lars and the Real Girl, Fright Night, Million Dollar Arm and The Finest Hours. She explains that after first reading the script last fall, the film was greenlit and shooting started in January, in Atlanta. Riegel stayed in L.A. working on the first assembly as the footage came in, and then, went to New York for six months for final post, finishing up in August. She explains that tax incentives offered in New York helped them complete post-production, including the director’s cut, mix and digital intermediate. “It was shot predominantly on film,” she says. “They shot 2-perf, 3-perf, and then the interviews were digital. Some of the slowmotion skating was shot on the Phantom. But it was predominantly shot on film, which really gives it a great look.”

Riegel has worked with her assistant editor, Dan Boccoli, for six years now, and relied heavily on him in the initial assembly phase in L.A. “He preps everything for me and is a wonderful sounding board for me during the process. We were cutting here in L.A. at EPS, which was terrific,” she says.

“Generally, I put scenes together and I send them to Craig to look at online. We have conversations about it. He gives me notes sometimes, sometimes not, depending on his thoughts. We’re pretty familiar with each other, so it’s actually a pretty simple routine. “And then he came to New York and we sat down together and began to do his cut,” she adds. “It was a really nice, easy, pleasant experience, I have to say. It really could not have gone better.” In New York, Riegel worked at Manhattan-based Harbor Picture Company and was assisted by Steve Jacks. “He was spectacular also. I had some really good luck finding him,” she says. “He was invaluable. Dave Patterson did an amazing job with our sound.” Riegel explains that, overall, I, Tonya is a little different from the other Gillespie films she’s worked on. “Tonally, it’s similar to Lars and the Real Girl, meaning dark comedy. In that way it was redundant,” she says. “But for this film, Craig decided to shoot in a very active way with lots of camera movements. He wanted it to be, in his words, ‘dirty and edgy,’ with lots of handheld camera moves, which is very different than much of what Craig had done before, which made it very interesting.” Some directors haven’t got the patience for it. But he knows it and loves it. We worked together all day, every day. He’s very involved.” The editor explains that although the film has an original score composed by Pete Nashel, they relied heavily on songs for music, which made it a little different from Gillespie’s other films.

“He designed a lot of the camera movement and a lot of the shots knowing that there would be music, and shot with that in mind,” she says. “So stylistically, that’s what we were going for. Something with a lot of energy, a lot of movement, and also,
it’s very emotional. It’s a film that is very dark and very funny, which is my cup of tea.”

Riegel recalls that the specific songs weren’t written into the script, although Gillespie had certain tracks in mind, so she put the first assembly together with almost no music. “We tend to do that a lot,” she says. “It’s a thing that Craig and I have gotten into that I really quite like, which is putting the whole thing together without any music. There were a few songs that were necessary. Obviously, Tonya Harding is skating to music, so in those places I had music. But the score, and a lot of the songs, we didn’t put in until after Craig had watched it. “I find it very helpful to do it that way,” she continues. “I think it allows me to really concentrate on cutting the movie rather than searching for music. It also forces me to be really brutal about whether or not a scene is working. If you don’t have music on it, you really don’t have a lot to rely on. So a scene has to work, whether it’s an emotional scene, a suspenseful scene or an action scene. If you can make that work without music, you know that once you put music on, you’re going to be fine.”

The film had two music supervisors – Jen Moss based in London, who started early in pre-production, and Susan Jacobs in New York, who came on halfway through the director’s cut to help clear the music rights. Riegel said that for some of the songs, they didn’t get clearance until very late in the game. “It was a little bit of a nail biter to make sure that we actually got them, but we did, so it turned out terrific,” she says. For Riegel, the biggest challenge was finding the right tone and balance. With the film’s mockumentary style, there are moments when the actors break the fourth wall and talk directly to the camera. “So there are interviews in the film,” explains the editor. “It’s not something to take lightly at all, and yet there are some very powerful scenes in the film, and there are some very funny scenes in the film. It’s that dance [that’s challenging]. People seem to be agreeing that we were successful at not making fun of the characters, [while bringing out] the absurdity of the story. It’s just innate in the story, because it’s an absurd story. Trying to find that balance there. So I would say those were the scenes that required a little extra time and effort.”

Noting that the editorial process on an independent film can be quite different from that of a studio film, Riegel says she was delighted that Gillespie got to make his movie independently. “It is really, plainly, his film,” she says. “That’s one of the advantages in independent filmmaking. I guess there are just fewer cooks in the kitchen, and everybody on this film was very supportive – the financiers, the producers.” Riegel – who won a 2008 Eddie Award, along with Leo Trombetta, ACE, for Pu-239 – adds that it was interesting working with a story about an enigmatic character like Tonya Harding where things are not black and white.

“A lot of people think of her as the villain, and somebody who did all of this horrible stuff, but who knows how she was really involved or to what extent? Still, to this day I think, nobody really knows the full truth. “One of the things I’ve always said, is that I like to make films that are interesting to me,” she concludes. “We all know why good people do good things, and we know why bad people do bad things. But stories get very interesting when good people do bad things or bad people do good things, and that’s something that I think is interesting about I, Tonya.”