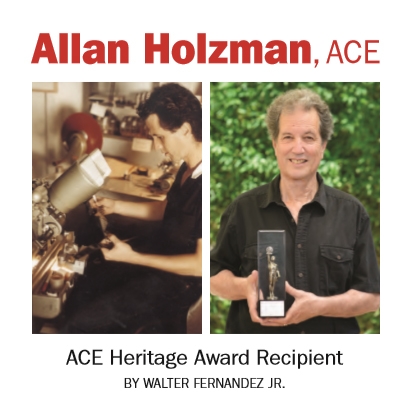 The Invisible Art, Visible Artists (IAVA) seminar has become one of ACE’s annual flagship events. The wildly-popular program takes place every year at Grauman’s Egyptian Theatre in Hollywood and offers a rare opportunity to hear that year’s Oscar®-nominated editors talk shop. Interestingly enough, the man behind it all – prolific editor/director Allan Holzman, ACE – conceived of the idea while recovering from the flu. “It was quite a beautiful story actually,” says Holzman.

“My favorite children’s book is Miss Rumphius, which I’ve read in my daughter’s third-grade class. It’s a story about a young girl who assists her grandfather in making paintings of the ships in a harbor. Her grandfather says to her, ‘I want you to do three things in life: Live by the ocean, travel the world and do something to make the world more beautiful.’ About 20 years ago, I came down with a nasty flu. I felt like I wouldn’t live another day. The first day I felt well enough to go outside, I took a walk and reminisced about that book. I thought, ‘I’ve traveled the world. I live by the ocean.

But what have I done to make the world a more beautiful place?’ IAVA would my contribution to the world.” He explains, “Have a seminar the day before the Academy Awards®. All the nominees have to be in town. Have it in the morning so it doesn’t conflict with any other event.

You have a discussion about the creative process. That’s all I wanted to communicate: the creative experience of editing.” By the time IAVA got off the ground, Holzman had already been in the business for over two decades as one of the premier documentary editors in town. He had earned two Emmys® for his work on Steven Spielberg’s Survivors of the Holocaust and an Eddie Award for the critically-acclaimed Old Man River. Not bad for a Baltimore kid who developed a noticeable stutter early in childhood. His stutter became something that he learned to embrace rather than overcome or use as an excuse to fade into the background.

He chronicles his journey in an autobiographical documentary called C-C-Cut: Autobiography of a Stuttering F-F-Filmmaker. The self-proclaimed storytelling stutterer cut his filmmaking teeth in Roger Corman’s camp. He soon went on to direct and/or edit a number of B-movie gems like Forbidden World, Out of Control, and Crazy Mama.

Around the time he met his future wife, composer Susan Justin, he began to add documentaries to his roster. This pivot would offer Holzman a new playground for his creative storytelling abilities.

One of his hallmarks on all of his documentaries is the lack of narrator to drive the story along. “I don’t like using a narrator in movies,” admits Holzman. “I have often tried using the speaker saying the same thing in multiple settings. It makes it more of a feature film because it is unpredictable and emotional. You’re not telling the story in a conventional way. You’re tying it through characters and characters are told through story. It’s really a way to keep the stories going and you can jump time.

Music is your narrative guide. A song is about three minutes and so is a scene. If the composer is into song structure you really can develop a beginning, middle and end in a scene.” It’s this passion for storytelling that led him to become one of the driving forces behind ACE’s Heritage Brunch. The first incarnation took place at a yacht club in Los Angeles over a decade ago where editors were invited for food, drink and a little gab session in front of the camera.

Holzman realized there was a whole class of editors who were assistants during 1940s and ‘50s who were unable to find work in film after completing their eight years as assistant editors. The editors who had trained them were still alive, working, and few had retired.

However, there was work in television. This group became the first great TV editors on shows like I Love Lucy and Mission: Impossible. They conducted 33 half-hour interviews in one day. Holzman recalls, “It was a very fun event. I couldn’t have done that or IAVA without Jenni McCormick [Executive Director of ACE]. She’s an amazing advisor, organizer and totally devoted.”

Even after nearly 50 years in Hollywood, Holzman has yet to slow down. He shares, “Four decades ago, I wrote a book on the art of editing that is about to be published. I wanted to reveal the art behind B-movie editing. The book is called Celluloid Wars: Lessons Learned from Making the Movie “Battle Beyond the Stars.” It will be followed by part two on directing.

Both books are based on daily journals I kept while working for Roger Corman on that film and Forbidden World (aka Mutant). He’s also working on a new fourscreen installation based on Martin Luther King’s “I Have a Dream” speech for Columbia, and penning his own memoir eloquently titled The Storytelling Stutterer.