Oddly enough, for an editor who has majored in comedy throughout his career, Eric Kissack never saw himself working in the genre. “I was never the class clown growing up,” he says. “I always appreciated more dramatic films … Kurosawa, Tarantino, directors like that.”

At an early age Kissack did, though, have a suspicion that everything in life was, well, silly. “Girlfriends would get mad because if we got in a fight I was always like, ‘This is silly, why are we fighting?’” From an early solo edit credit on The Daily Show, Kissack has worked his way up the comedy ladder including episodes of sketch show The Whitest Kids U’Know, Wainy Days and Veep to features like Horrible Bosses 2 and Daddy’s Home.

For the last couple of years he has been busy editing 17 episodes and counting of The Good Place, created by Brooklyn Nine-Nine and Parks and Recreation’s Michael Schur for NBC. The series, currently in its fourth season, centers around Eleanor Shellstrop (Kristen Bell), who wakes up in something called ‘The Good Place,’ an afterlife designed by an eccentric named Michael (Ted Danson) who is eager to reward Eleanor for her righteous life. But Eleanor soon realizes that she was sent there by mistake and must hide her morally imperfect behavior while trying to become a more ethical person.

The show received positive reviews on debut and has since gained critical acclaim. It has been praised for its acting, writing, originality, setting and tone. In addition, the first season’s twist ending and the show’s exploration and creative use of ethics and philosophy have been positively received. The recognition also earned the series a Peabody Award earlier this year.

“The show has a lot of magic going on in heaven,” says Kissack, who says he particularly enjoys working with the VFX team led by VFX producer David Niednagel. “I’ll be editing a scene that requires, for example, a giant magical bird that flies out of a volcano and turns into a turtle – I need to put that into my cut. I will walk to David’s office, explain what I need, and he’ll send me a rough version and we go back and forth like that. It’s a super fun part of the job.” Kissack has too many favorite The Good Place episodes to count, but one in particular stands out. “Michael Schur is a huge fan of TV series Lost. A lot of people have drawn similarities between that show and ours – the structure of all the characters thrown together in some mysterious place, secret hidden histories revealed in flashbacks; there’s something mysterious going on, a deeper hidden truth.

So in one episode called ‘Don’t Let the Good Life Pass You By,’ the opening scene was written to resemble that of the opening scene of Lost episode ‘Man of Science, Man of Faith’ that started the second season, which was set to Mama Cass’ hit song ‘Make Your Own Kind of Music.’ We did our own version of that intro for our episode, using another Mama Cass song referenced in the episode’s title. It got a ton of great feedback; Lost fans definitely noticed and appreciated it.” 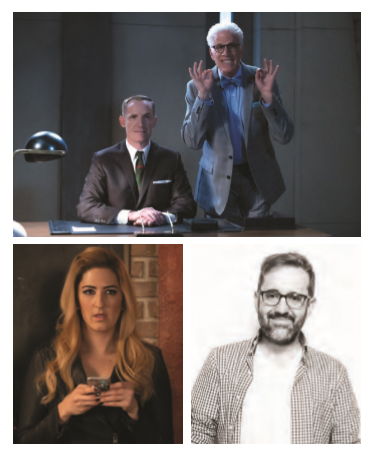 Kissack notes that episode was also a blast to edit because it contains a giant fight scene. “It’s extremely rare in network comedies to get to edit a scene with stunt fighters and actors flying across the room on wires and so on. It felt like being a kid in a candy store getting to put that together. I also used an old editing trick that my co-editor on The Dictator, Greg Hayden, showed me which is that if you want to make a punch seem more violent, you remove one frame of footage before the moment of impact.

It’s a tiny jump cut that serves to subconsciously help audiences believe the stunt work.” Kissack had studied film at Brown University. “We studied film theory, linguistics, mixed with cultural theory – heady stuff like that. I quickly figured out that wasn’t for me. So instead of going to class I made short films. And I wanted to work in film, but I had no hookups.”

He wound up editing random corporate videos around the time Apple Final Cut was first released. Then he met comedy actor/ director David Wain, who asked him to be an additional editor on Comedy Central show Stella, where he eventually got promoted to editor. Before long he was editing his first studio feature film, Role Models, with Paul Rudd.

But for Kissack, film was an environment that didn’t feel completely right. “For a while I was chasing film directing projects and realized film directors need that aura of ‘I’m the man with the plan, the visionary,’ and I’m not, personally, that narcissistic. To me TV is much more about working in collaboration with the same great group of people. It’s about what other people bring, not just you.” After editing features like Sacha Baron Cohen’s Bruno and The Dictator, Kissack wanted a change of pace and decided to head back to TV. 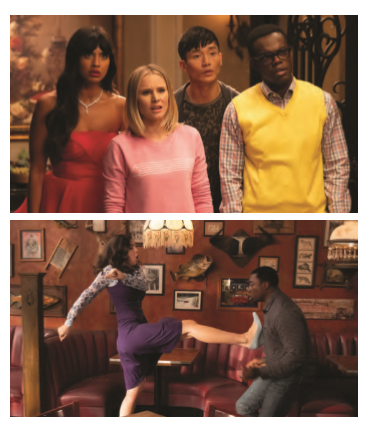 He snapped into hustle mode and called the current showrunner of Veep, David Mandel, who he worked with on The Dictator. “I asked him if he needed an editor. He did. So I ended up work- ing on the sixth season of Veep.” TV editors commonly seem to struggle with the same challenge: keeping the episodes to time. “There is so much good content to work with that the hardest thing is having to leave some of it on the cutting room floor,” Kissack explains. “With the nature of TV and how little time we have in an episode, everything that is shot is sharp, quality content.

Most cuts start at 28-30 minutes. I have to end up cutting almost a third of the episode out.” The Good Place season takes about 30-32 weeks to make. Each season has 13 episodes, shoots for 13 weeks, they edit for 13-15 weeks and then have three or four weeks to wrap everything up. “We are in a time right now where most acclaimed comedies actually straddle comedy and drama,” Kissack explains.

“The Good Place strikes a similar tone. It’s a hybrid. If you don’t have the pathos that counterbalances the comedy, I don’t think it can win an audience.” Kissack recently finished Sunnyside, a pilot for NBC, and he also worked on the show, Black Monday, for Showtime. “I love editing but my passion is directing. The goal ultimately is to be a TV director but maybe not just comedy. I’d love to work with a larger canvas. It would be a dream to direct a show like Better Call Saul.

At this point, though, I’m still primarily editing and my skills as a director mostly serve to make me a better editor. I’m also at the point where the people I work with are perhaps more important than the material. If the people seem cool, then I’m in. And as long as Michael [Schur] keeps creating shows, I’d like to be a part of that.”