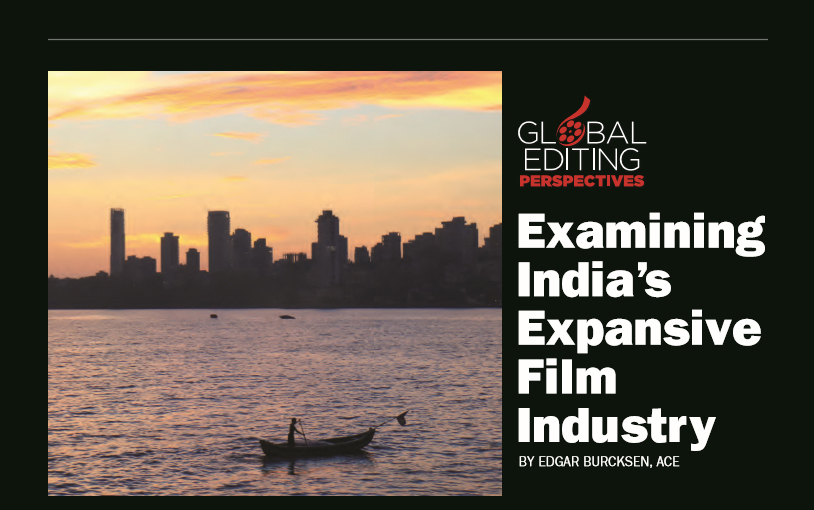 About 10 years ago I was invited by Indian production company Phat Phish to come to Mumbai to help them prepare Quick Gun Murugun: Misadventures of an Indian Cowboy, a feature that was already released in India, for the American market. Not knowing more than that India had a huge film industry and that Mumbai was one of the major centers of production, I was amazed by the sophistication. My editing room had a fully-equipped Avid Media Composer with all the bells and whistles. Because time was of the essence I did not have a lot of contact with editors in Mumbai. More recently, as I’ve been working to expand ACE’s international reach, I got in touch with Mumbai/Hyderabad-based editor Kiran Ganti for an update on this industry from the editors’ point of view.

Some history: The first feature-length Indian silent film, Raja Harishchandra, was produced in 1913 and was directed and edited by Dadasaheb Phalke, who is known as the father of the country’s film business. The most prestigious governmentpresented lifetime-achievement film award in India is named after him. It’s presented every year on May 3, the original release date of Raja Harishchandra.

Roughly 900 films are released theatrically every year in India. The industry is based in three major production centers: Mumbai for the Hindi language (about 140 productions last year), Hyderabad in Southern India for the Telugu language (185 films per year, including 50 films dubbed from other languages) and the Tamil language in the South Indian city of Chennai (about 140 productions a year). Films in Kannada language, produced from South Indian city of Bengaluru and in Malayalam, produced from the state of Kerala also contribute roughly 250 films each year. The rest come from Marathi, Bengali, Punjabi, Oriya, Gujarati and Bhojpuri language regions. Some of the South Indian films are dubbed and crisscross from one language territory to the other while some are specially dubbed in Hindi for television. It makes for a very diverse creative output that is, according to Ganti, selfsustaining and fascinating.

There are no honorary societies in India, such as ACE. In Mumbai, there is an editors organization called the Association of Film & Video Editors (AFE). Each of the South Indian film industries also has an editors association. AFE is also a part of the All India Film Federation that represents 24 other arts and crafts of the industry. The AFE has about 1600 members of which half are still active in the editing rooms across films, TV, documentaries and other types of content. Ganti explains that the AFE is strictly a union that solely deals with labor/organizational related issues and not with the technical/creative part of editing. He adds that there are no other organizations, professional or otherwise, that give a platform to editors who want to discuss, learn or study the craft and art of editing and in that respect, an ACE International Affiliate membership chapter in India could fill a large void.

Ganti also conducts classes at Ramoji Academy of Film and Television, situated in the world’s largest film studio, Ramoji Film City, Hyderabad. On the professional front, he feels there is a lack of space for sharing of knowledge about editing and a crosscountry sharing of expertise/experience – and that this is the need of the hour. He says he is convinced about this because he once worked with Walter Murch, ACE, and recognizes the immense value that he got from the experience. He also shares that two of India’s biggest Hindi films from last year – Sanju and Padmaavat – were directed by Rajkumar Hirani and Sanjay Leela Bhansali, respectively, who have also worked as editors.

The creative recognition of editing is only acknowledged at award ceremonies that are organized and sponsored by the TV networks of each language region. The Indian government also presents yearly awards at the National Film Awards ceremony by the Directorate of Film Festivals, an organization set up by the Ministry of Information and Broadcasting. The ceremony is divided in two categories: feature film and non-feature film; consequently there are two awards for editing. Ganti likens the prestige of this ceremony in India to the Academy Awards®.

Historically, due to technical, logistical and aesthetic reasons, the majority of the films produced in India were all shot with ‘unblimped’ film cameras and were dubbed. (A blimp is a housing that suppresses the l 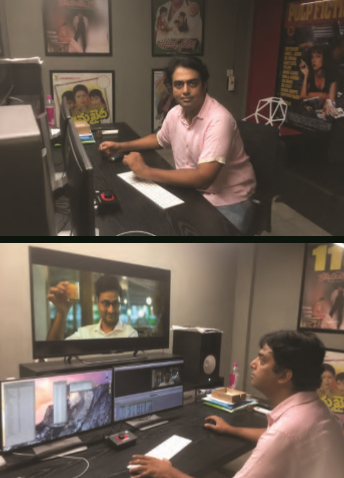 oud sound of the camera, but makes cameras unwieldy and so, in India, filmmakers used unblimped cameras and post synced the dialogue.) Things changed in the Hindi film industry in early 2000 when sync sound picked up momentum, especially after the success of the Academy Award-nominated Hindi film, Lagaan (2001), that pioneered sync-sound shooting. But when the Arri Alexa, Red and later the Canon 5D and 7D cameras were introduced, everything changed. No more ‘heartbeat’ on set because these cameras were silent and no more shooting discipline because the recording material is so cheap. A majority of the films made in Hindi now are shot sync sound though that is not the case in South India. Ganti reports he is working on a motion picture in the Telugu language – Phalana Abbayi, Phalana Ammayi (PAPA), directed by Srinivas Avasarala and produced by People Media Factory – that is shot with sync sound, which he believes is a first in the region on a medium-budget film. This, he hopes, will help change movie making in his region.

On the distribution side, India has around 10,000 theaters; a majority of them have single screens. The digital revolution also brought new forms of distribution, and streamers like Netflix and Amazon Prime started to gobble up content. A movie acquired by Amazon is on its streaming platform six weeks after its theatrical premiere. Amazon also started to invest in and produce its own content in India. There are also Indian streaming platforms like Zee5, Hotstar, Jio, SonyLIV, etc, which are making original content. Considering India has 370 million smartphone users this isn’t surprising. The reach of Indian films around the world is extraordinary because of the huge number of expats that are living in the U.K., U.S., Canada, Australia and the Middle East. Because of this, the Indian film industry is shooting a lot of content in these countries and regions that not only cater to the expat community but also to the domestic market. On an average, 25 percent of an Indian film’s revenue can be recovered from these markets. There’s also more crossover to more traditional film markets in Europe and the U.S. For instance the two-part magnum opus Telugu feature Bahubali: The Beginning (2015) and Bahubali 2: The Conclusion, (2017), edited by Venkateswara Rao Kotagiri on an Avid, was a very successful crossover, especially in the U.K., Europe and China. Presumably, Indian films shot in expat countries will find a broader audience, with Amazon and Netflix hungry for more original content for their global audience. The Telugu film that Ganti is currently editing is a new-age romantic film of which more than 50 percent was shot in the U.S. Ganti had one more thing he wanted to share about the Indian film industry in Mumbai: They hate the ‘Bollywood’ moniker. Saying that ‘Bollywood’ was started as a joke many years back but it stuck, he says his industry thinks that the derivative of Hollywood denigrates the importance and creative uniqueness of their film industry. Says Kiran, “Every year, more films are produced in Mumbai than in Hollywood. ‘To be, or not to be’ is no longer the question. ‘What’s in a name?’ Quite a lot.