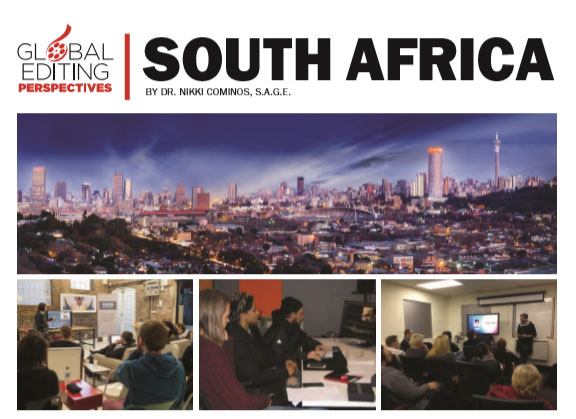 An increasing number of successful movies, actors and motion picture professionals have become known internationally and have joined the ranks in Hollywood. ACE has been in contact with its vibrant South African sister organization, SAGE, and we asked them to introduce themselves.

The South African Guild of Editors (SAGE) is a voluntary, non-profit organization that represents film and video picture editors, assistant editors, sound editors – and most recently, virtual-reality editors. In its 20-plus years of existence, SAGE has become a key stakeholder in the South African film and television industry and aims to promote the art of editing. With a core body of around 120 members, the guild represents most of the best talent in the post-production industry in South Africa today.

As the only representative body of post-production professionals in South Africa, we represent post-production workers’ interests at industry and government levels. We facilitate master classes, workshops and social events. For producers looking to hire, our website provides quick access to a verified list of members, their post-production skills and contact details. The SAGE accreditation team carefully reviews all applications, which require a current resume plus three references. We welcome membership applications year round.

SAGE aims to promote the art of editing through several initiatives. For instance, we have enjoyed a collaborative relationship with Durban International Film Festival (DIFF) since 2012. As part of the festival, we have hosted master classes and panel discussions with award-winning editors. DIFF introduced an award for best editor in 2016 after consultation with SAGE. This drive was spurred on by a petition led by ACE and Motion Picture Editors Guild’s Committee for Creative Recognition.

In collaboration with Encounters Documentary Festival and Refinery Cape Town, SAGE also launched the first South African edit lab for documentary films, the Encounters SAGE Rough Cut Lab. We hope to have a documentary edit lab every year, with the possibility of extending the lab to include a feature film section.

As a guild, SAGE hosts social events for editors to network and share work experiences with each other, for morale as well as technical and/or creative support. It also actively promotes the development of editing skills and alerts members to job opportunities via the SAGE mailing list.

To support editors’ freelance work, SAGE has created an ‘Independent Contractor Agreement’ with legal counsel for independent contractor post-production professionals, which can  be adapted to their specific project needs. Our ‘Pre-Employment Checklist’ provides a number of questions and issues that should be raised before any contract is signed. We also have an ‘Employees vs. Independent Contractors’ document which provides clarification about the rights of employees. It also enables editors to determine when they are independent contractors and when they are employees. Our ‘What to Expect from an Editor’ document helps producers and post professionals better understand the various job roles in the industry.

SAGE has published an annual rate card of recommended salaries for editors for the last 16 years. This is calculated using four main principles: inflation matching, skills growth, a spread of rates, and rates and conditions comparable to cinematographers. We urge professionals to consider that the rate card represents a broad spread of possible rates, while covering a wide range of job types, genres, durations, locations, funding models, labor conditions and budgets.

Not everyone will improve their skills at the same rate, which is why we maintain a spread across all levels of experience.  While aimed at freelancers, the rates can also be used as a starting point for full-time employment negotiations. We also take into account that experience does not necessarily equate to the number of years spent working in the post-production industry, but rather the specific years of experience doing a specific task. We urge everyone to consider job sustainability when negotiating rates, and also to keep in mind that the average career span from entrylevel to retirement is 40 years.

We have an anonymous ‘job offer reporter,’ which we encourage post-production professionals to fill out whenever they receive or accept a work offer and we forward job offers through our mailing list. This helps SAGE better understand the real-world rates and conditions that editors are being offered. SAGE also follows up on employers who don’t pay in a timely fashion on behalf of its members. SAGE has run a survey of post-production for editors and producers since 2014 which helps keep the guild in touch with the challenges and perceptions of the sector. This survey covers questions about rates, time given to complete projects, relationships with directors and expectations of editors as well as other aspects of the job.

To further promote the art of editing and editors as artists, SAGE acknowledges the creative input of editors with the acronym, S.A.G.E. This is the highest honor the guild can bestow on a member. Applications for the acronym are available to a full member whose body of work is considered to exhibit a consistently high standard of editing as judged by the acronym subcommittee. In 2012 the application process was revised to align itself with the standards of our international counterparts, making it a rigorous process for both the applicant and committee.

According to our constitution, applications for acronym accreditation require that the editor:

Be a current member of SAGE, with a minimum of five years paid membership.
Be a full member for at least one year before applying.
Have at least five years industry experience as an editor.
Demonstrate their ability to advocate the role of editors in the industry.
Submit a body of work that is considered to exhibit a consistently high standard of editing. Being internationally relevant is a priority for SAGE. Therefore, it has been of vital importance that SAGE participate in the commentary and submission process of the South African Copyright Amendment Bill (still in its legislative cycle). The South African government’s review of South Africa’s 1978 Copyright Act has given SAGE an opportunity to advocate for editors’ rights and access to royalties, as practiced by EU countries such as Austria, Germany and Finland.

Our original proposal was submitted to the government in late 2015 and our presentation of that submission was made to Parliament last August. The presentation was well-received.  In addition, a report on transformation in our sector – or the lack of it – was drafted for submission to the committee.

The guild is presently run on a voluntary basis by the members of the executive committee, all of whom are post-production professionals. The core is about eight people at any given time.

SAGE is also represented on the South African Screen Federation, which in turn represents the broad film industry to government, the Department of Arts and Culture as well as the National Film and Video Foundation. And SAGE is active in the judging of the South African Film and Television Awards.