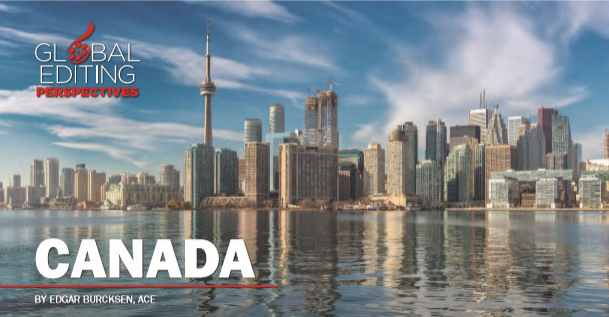 Like ACE, Canadian Cinema Editors (CCE) – established a little more than a decade ago – is an honorary society with similar goals. With more than 400 members, CCE is also one of the editors organizations on the roster of ACE’s International Relations Committee.

Just as U.S.-based editors sometimes travel to Canada to edit shows, CCE editors sometimes come to the Southland to work. Among them is CCE President Stephen Philipson, CCE (American Gods, The Bold Type), who recently is editing Amazon series Sneaky Pete starring Giovanni Ribisi. Since he was working in L.A., we caught up during the recent ACE Holiday Party.

To become a full CCE member, an editor needs to be nominated by a full member (each member may nominate up to two new full members a year). She or he is responsible for making a case for a new member, before a committee, who may grant full membership. The committee considers the candidate mainly on their body of work as there isn’t a specific minimum hours of content requirement. CCE members who nominate a prospective member may submit films, TV series or other work to support the application. This differs considerably from the ACE procedure where the prospective member needs to have at least 60 months of verifiable credits and will be interviewed by the membership committee reporting to the ACE board. 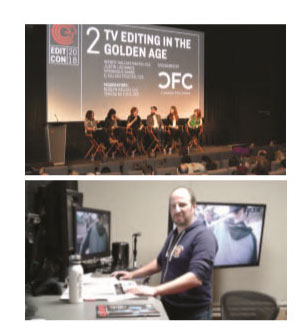 CCE also has associate and student members that may participate in most of the organization’s activities and may later move up to a full membership if editing is their main trade. The group holds an EditCon (similar to ACE EditFest) each February and its annual CCE Awards in April or May. CCE membership includes discounts to these events, as well as participation in podcasts and pub nights.

Many of its members are based in production hubs such as Toronto and Vancouver, as well as Montreal, Quebec (where apart from producing content for the French Canadian market, it provides content for France and other French-speaking markets).

Of its board make up, Stephen explains that CCE “aims to have at least one board member in every region of Canada, not necessarily every province.” These regions are British Columbia, Ontario, Quebec, Prairie provinces (Alberta, Manitoba and Saskatchewan), the Maritimes (New Brunswick, Prince Edward Island, Nova Scotia and Newfoundland), and the territories (Yukon, Northwest Territories and Nunavut). “Though we don’t yet have any operations in the territories,” Stephen explains, adding that since there are fewer members in the Atlantic and prairie regions these members receive discounted membership. In order to involve all board members, monthly meetings are held via Skype video conference calls.

Stephen explains that he is very much interested in working with ACE on the global motion picture scene. Because there is such a close international relationship with all the productions moving almost freely from country to country and particularly between the borders of U.S. and Canada, there needs to be a tight communication between editors. The editors unions in Canada mainly deal with labor and remuneration issues and are fragmented between the Atlantic and Pacific, where the bulk of the editors in the East are part of the DGC (Directors Guild of Canada) and in the West they’re represented by the IATSE Local 891. He also notes that editing unions are different for each province. This fragmentation makes it even more important for CCE to unite the editing community in Canada on artistic, creative and technical issues. In light of this Stephen thinks that it is a great idea that ACE tries to do the same on a global scale, so that we can inform and learn from each other. He thinks that there will be a great interest among the CCE members to join ACE as International Affiliate members.

The Canadian domestic market motion pictures in the English as well as the French territories, produce highly skilled editors that would be eligible to become ACE International Affiliate members. Additionally, they can become full active ACE members if they meet the application requirements when their work is distributed in the U.S. Stephen is very aware of the fact that not everybody has the unique qualifications that he has to be able to straddle the international borders, having parents from both the U.S. and the U.K., as residents in Canada.

Stephen believes that it is in CCE and its members’ interest to tighten the lines of communication with editors in other countries since the film industry has already gone global a long time ago. He invites American editors and especially ACE members to contact CCE when they’re working in Canada. CCE would like to invite them to participate in its events to share their knowledge, experience and stories.