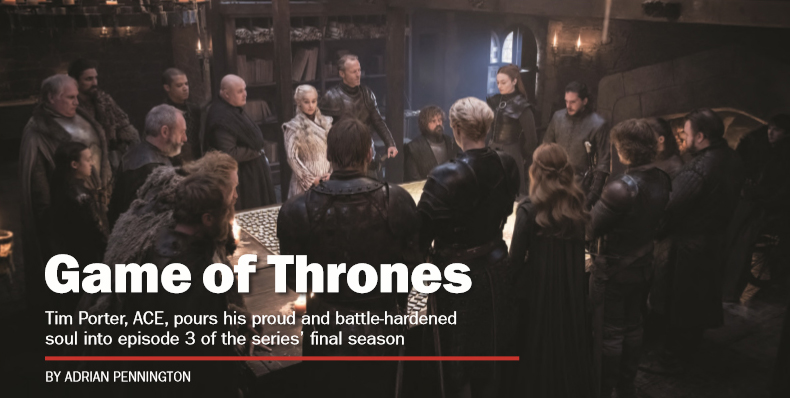 The final season of HBO’s sword-and-sorcery epic was always going to end in tears. If not for some of its characters fated to be given the chop, then for the editing team which has carried the show’s battle-fatigued heroes and villains over many years.

Tim Porter, ACE, is one of those. He joined in season 4 and edited 11 episodes, of which three were nominated for Emmys® and Eddies.“Thrones has been a huge part of my life for the last seven years, so heading into season 8 definitely felt like the endof an era,” he says.

He returned to the Belfast shoot for two of the final season episodes: 803 “The Long Night” and 805 “The Bells,” arriving in January 2018 for the edit, although the crew had already been filming since October 2017 on episodes 1 and 2.

“In that week before your episodes begin filming, I’ll set the cutting room up with the assistant editor, and reread the script,” Porter explains. “An episode like ‘The Long Night’ will all have been previs’d. I’ll familiarize myself with that. It’s a great shorthand into what’s about to be filmed, as I’ve not been heavily involved in pre-production.” Unlike other seasons he’s worked on, there was no cross shooting of episodes 803 and 805. “The Long Night” was shot from January to April with delivery of the director’s cut in May. Filming 805 followed for delivery of the director’s cut in September.

These episodes were directed by Miguel Sapochnik with whom Porter had collaborated on the show since 2014. “I was hugely excited by the challenge of doing two large-scale action episodes to finish off my time at Game of Thrones,” Porter says. “Teaming back up with Miguel, felt like we were getting the band back together.

I had Meredith Leece as my assembly editor [Porter’s assistant on seasons 6 and 7] and Richard Denbigh [who’d worked with Porter on The Crown] was hired as my assistant. It was great to be reunited with the editorial team headed by producer Greg Spence, with Alan Freir and Ide O’Rourke.”
The season’s other editors, and also Thrones stalwarts, are Crispin Green and Katie Weiland, ACE, with whom Porter shared cuts. “Katie, Crispin and I are always incredibly busy on the show, so we don’t religiously share our work, or ask each other’s opinions, but I will definitely look to show the episode once it’s fully assembled and get feedback from them. They know the show and their notes can be invaluable.” 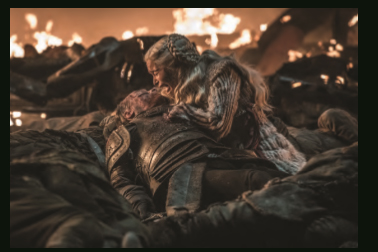 While there have been lengthy battle scenes in the series before, none matched the scale of “The Long Night,” which is one continuous sequence from beginning to end. “There wasn’t any build-up within the episode before we get to the battle, as with the other battles I’d cut,” Porter says. “Creatively I was most interested in constructing this singular action sequence, as I’d not had the opportunity to do one over such a sustained period, as a standalone film. The sparseness of dialogue in the episode was also extremely attractive, constructing the narrative mainly through action is a rare treat.”

He enthuses, “Navigating and synthesizing the characters’ journeys across the episode was something that really appealed to me. Rhythmically, it was challenging to decide when to have tension, where to have hope, when to feel all is lost.” With a considerable quota of visual effects for this episode, Porter needed to turn over shots very quickly, particularly plates with a dragon in, or shots that needed tracking for motion capture. “Miguel and I met every Saturday to watch cuts. We would also make time for VFX, which would have sent a list of shots that they needed us to pick plates for. We turned stuff over to them from the very first week of filming.

For our offline VFX temps we would get the greenscreen elements pulled from the previs and use those to temp comps into our cut. Richard [Denbigh] would do all the temp VFX in Avid.” It was also a challenge to track the storylines and characters in an ensemble sequence such as this. “When you have lots of characters with lots of events happening to them in different locations, the challenge is not being away from those characters or that story for so long that you’ve forgotten about them – unless its Arya, of course, we wanted you to forget about her! “But with everybody else, it’s a juggling act. It means going over and over the sequence and questioning your choices. 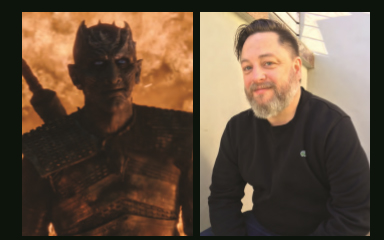 You need to explore alternative ways of structuring the shots or plotting the character journeys to find a balance again. It takes a little bit of elbow grease to find what feels right for the sequence.” Porter explains that he likes to put the shape on a scene or sequence as quickly as possible, and then go through all of the dailies to make select reels with all of the best bits of action. “I have select reels of each character and each beat or moment, and any cool stuff, all logged and ready for me to use. So, when I start fine cutting these sequences, I can re-watch the selects at any time without having to go trawling back through the dailies, searching for a needle in a haystack.

“I suppose what I’ve learned from cutting these big sequences is that managing and staying on top of the material on a daily basis is vitally important. Getting too far behind is a really negative place creatively for me to get into.” Part of a sequence in the episode was dubbed ‘Man the Walls.’ Everyone has retreated inside Winterfell and are being overwhelmed by the Army of the Dead.

The defenses have just been breached, and we see The Hound leaning against a wall, frozen with fear. This is intercut with mayhem all around him. “What I try to do during these action sequences is to find some character moments in them,” Porter explains. “In this case we had Arya fighting up on the ramparts. I took the opportunity to intercut her with The Hound, as we know there is an emotional connection between them. While it’s an obvious thing to do, it’s an effective way of putting an emotional layer in the sequence.”

Porter went on to mirror this intercut on 805, “The Bells,” where The Hound is fighting his brother, The Mountain and Arya in the middle of the obliteration of King’s Landing. “Again, I feel that this was a really effective emotional grounding for the sequence, because the audience understands the relationship between these two characters and it’s important to them. In both cases, I think it was successful.” Perhaps the biggest challenge of the “Long Night” episode was act three, and the moment it came together was the most rewarding.

“Jon is fighting his way into Winterfell to get to Bran. The Night King is heading to kill Bran. Theon is fighting for his life while protecting Bran and Jorah is making his last stand defending Daenerys while the people in the crypt are being attacked by the undead. “I found it really tough to find the right pacing. The action that had come before it had been quite intense, and to find a way of presenting this act without repetition was hard. When I’m struggling with a sequence, I might do the opposite of what I’ve been doing.

As it was an action sequence, I had some fast-paced action music playing, so I tried a piece of [composer] Ramin Djawadi’s music that he wrote for episode 10 of season 6, called ‘Light of the Seven.’ It’s a fantastic piano piece, that slowly builds. I laid that on this 10-minute sequence of everybody fighting for their lives and it suddenly felt like it was the end of the world. “It was a moment of alchemy that, for me, brought the sequence together. Miguel had also shot some of the material around that section at 96 frames, which lent itself to being slowed down.

Maybe I should have spotted that sooner, but that’s the fun of what we do, sometimes you need to do the opposite of what you’re thinking. There’s always a solution. There’s a constant sense of discovery happening in a sequence like this. It’s really satisfying when you finally find the missing link and it comes together.” It’s been a few months since Porter walked away from the show completely – he was still dropping in visual effects shots and doing final tweaks to this episode until February.

Watching the final episode unfurl on TV was, for him, the realization that it really is over. “When I began editing, nearly 20 years ago, I used to get home from work and watch The Sopranos. I was completely in love with that show. My dream was always to work for HBO, and to get that opportunity in 2013 was amazing. It was actually the one goal that I’d set myself in my career and that it happened, and that my experience on Thrones turned out to be everything and more that I could have hoped for, that’s just fantastic.

I thank the editing gods for that one!” He adds, “I feel really lucky and fortunate to have met and worked with such talented people, many of whom are now my friends. It’s been an absolute pleasure. I’d do it all again … maybe.”