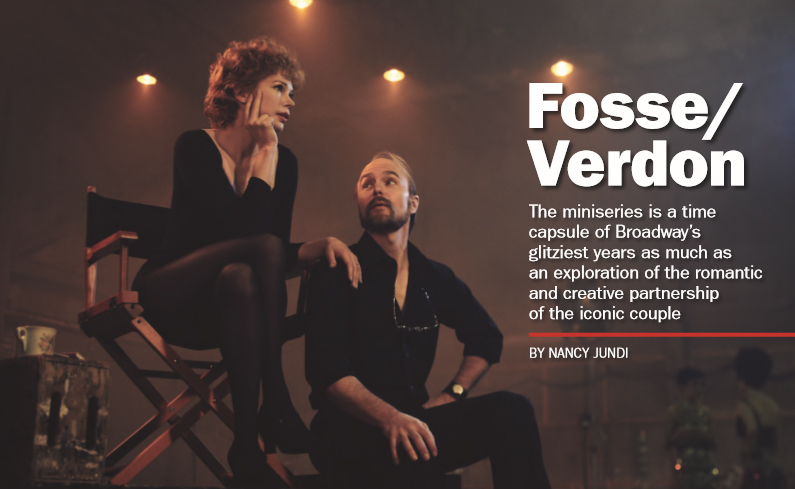 There’s a scene in the third episode of Fosse/Verdon that exemplifies all there is to know about the iconic romantic and creative partnership of Bob Fosse (Sam Rockwell) and Gwen Verdon (Michelle Williams). Fosse is in the middle of editing Cabaret and makes a surprise visit to Verdon’s home. “I was thinking maybe you could come to the editing room for a few weeks,” says Bob to Gwen, “you know, and maybe you’d see some things that I don’t see. I’m feeling a little lost right now.”

When Gwen explains that she has her own play to concentrate on, Bob all but ignores this and further presses his request for her to be by his side during editorial. Even for Bob Fosse fans the FX network’s miniseries may be their first real experience learning about Gwen Verdon. “I think that we all hoped to introduce Gwen to the uninitiated, and to deepen everyone’s understanding of how influential she was,” says Kate Sanford, ACE. The New York-based editorial team consisting of Sanford; Tim Streeto, ACE; Erica Freed Marker and Jonah Moran all had great reverence for the material, as well as editorial hero and longtime Fosse collaborator, Alan Heim, ACE, who won the Oscar® for Fosse’s All That Jazz in 1980.

“Before I read anything, I was concerned that the show would just seem like an All That Jazz impression, which would’ve been a disaster because that film is a masterpiece,” says Streeto. “There’s no way any of us can ever land an astronaut on that moon again. That fear was gone when I saw how much the series was focusing on Gwen and her role in Bob’s life and work. So I hope that Gwen fans will really embrace that perspective of the story.”

The Fosse/Verdon team took on the formidable, yet almost mandatory task of playing with time and space for a story that spanned five decades. “Bob and his editors, notably David Bretherton and Alan Heim, created something that came to be known as ‘Fosse time,’” notes Moran. “He would jump around in a non-linear fashion often juxtaposing fantasy and reality, revealing information and memories out of time, injecting deeper meaning into the reading of a musical number or a simple interaction. 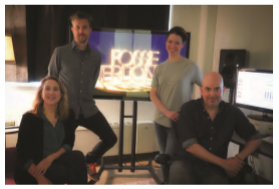 They helped define a very contemporary and stirring form of cinematic storytelling that we see broadly emulated to this day.” Moran, who was particularly moved by Fosse, the Sam Wasson biography upon which the series is based, notes the important role that both Gwen and Bob’s early life traumas and passions played in shaping their careers, work ethic and aesthetic sense.

“Both Gwen and Bob grew up in the shadow of the disappearing glow of vaudeville,” he says. “They found themselves, at a very early age, performing in burlesque houses and clubs, far from the luster of the showbiz dream personified in the films of Fred Astaire that they grew up watching and emulating. This glitzy ideal became perverted – figuratively and literally – early in their lives, both having seen too much too soon and both being taken advantage of by the dream of fame. So, here we are in some ways using Bob’s own language to examine who these characters are.

We were literally reaching onto Bob’s aesthetic playbook to articulate our story.” To keep track of the intricate timeline, Sanford had scene cards on the wall of the edit room. “They were constantly being manipulated and reconsidered by me, [director/creator/writer] Tommy Kail, and the producers, Joel Fields and Steven Levenson. As we began to intercut scenes, I would duplicate cards and begin to arrange them in alternating order.

“For instance, Bob and Joan talking in the bedroom as he comes home after meeting Gwen, then Bob and Gwen rehearsing, back to the bedroom, back to rehearsal, etc. Soon there were too many cards to represent each intercut, but you would get the idea when you looked at the wall. Overall, I think most of the episodes were written in whole scenes and the experimentation with short flashbacks, fragmentation and intercutting began in post and became a major part of the editorial process. Once we began to find the structure and rhythm of the piece, the experimentation continued right up until locking picture.”

Moran says the challenge was finding the right voice for the flashback language. “Our producers emphasized that there were real differences in how Gwen and Bob experienced their pasts. Bob carries his with him every day; it lives right next to him, which is why you see the camera deliberately drift off Bob into his memories – especially in episode 1, where he’s shaping Cabaret with the experiences of his past. For Gwen, there’s much more of a wall protecting her from the pain of those memories. So, her memories are more intentionally jarring and fragmented. This was something that Tommy, Steven and Joel were very clear about. It’s a very interesting distinction that says a lot about the differences in these characters, but also, how each were, in a way, living out lives shaped by trauma and ambition.”

Moran sings Michelle Williams’ praises in having captured Verdon’s cool and graceful outward presentation, even at home. “Only rarely do you see cracks in that veneer, of the real trauma underneath that claws at her. We found that sharp quick cuts, like shards and fragments of memory were working well to portray this, but the fully-articulated flashback scenes that played out of time could feel out of place if they were too literal.” Freed Marker shared that across the four editors and eight episodes, they felt the magnitude of inspiration and collaboration.

“We created only one Avid project for the entire series. While this obviously made it easy from a technical perspective, one of the unexpected highlights from a creative perspective was sort of to subliminally send the message that all of the material from the series was available for use in any episode. As a result, I found myself constantly looking through earlier episodes for inspiration as I was cutting both 5 and 8.”

Freed Marker edited the finale. “For the final Gwen/Bob sequence in episode 8, we had the assistant editors pull and organize all of the Gwen-and-Bob scenes in exact reverse chronological order. Since the series itself is told out of order, experiencing these interactions in chronological context for the first time – even as the footage itself was being experienced for the second time – imbued every interaction between them with new significance.

In terms of advancing meaningfully through time, especially with the finale episode, the text and placement of the chyrons was also very carefully considered and changed significantly with every cut. Since so many years are covered in the finale, and tracking each milestone and the characters’ journeys relative to those milestones was so important, we auditioned a lot of text before agreeing on what felt right.”

Fosse/Verdon is also designed as a time capsule of Broadway’s glitziest years, a labor of love for so many of contemporary theater’s most powerful and brilliant voices. It was a deeply personal biography from Nicole Fosse, the daughter of Gwen and Bob. It was an incredible spotlight on her mother who was so much more than Bob Fosse’s muse. Freed Marker says it best: “Across the departments, it truly seemed like all of the most talented people in New York had been tapped to offer their individual gifts.” 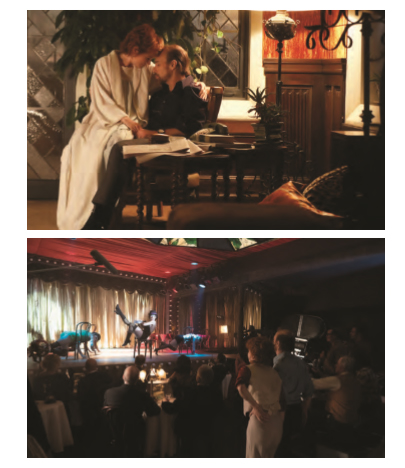 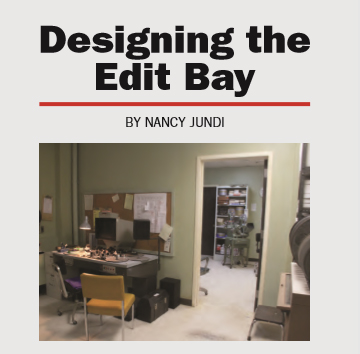 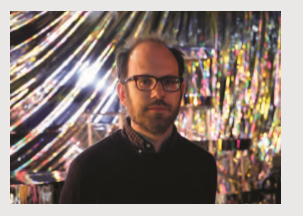 Production designer Alex Digerlando led the creation of the edit bays that feature in several episodes of Fosse/Verdon.

“Every scene in the edit room had to meet several goals” he says. “For audiences who might not understand how films were edited before computers, we had to show how the sausage was made, so to speak. We had to make sure all this great gear was placed in such a way that we would be able to see it, but at the same time, a lot of what is happening in the scenes doesn’t actually have anything to do with the editing so much as the emotional interactions between characters. We had to be thinking about the blocking of that, too, while making sure the gear also didn’t get in the way.”

Episode 3 opens with Bob Fosse dancing into the Cabaret edit suite through a colorful array of backup dancers, choreographed against “Willkommen,” one of the show’s most notable songs. After a quick back and forth with his editor, David Bretherton, we follow Fosse into the fourhour first assembly screening.

While Cabaret went on to win eight Academy Awards®, including best editing for Bretherton, who also won an Eddie, Fosse/Verdon sends Fosse out of the theater and back into the once-colorful hallway, which is now dark and gloomy, physically pulling him into a black hole through trim bins and film canisters.

“You have to think about things more precisely for a musical number than you do for more straightforward action,” says DiGerlando. “It’s more like planning for a stunt. All the dressing has to be placed according to the choreography. Originally,
we thought we would build the edit room hallway to achieve that falling gag, but it proved too costly and time consuming. Also, we just didn’t have enough space on the stage with all the other sets we were building so we ended up doing both the edit suite and the hallway on location at Bayley Seton Hospital in Staten Island.

“The falling effect was a combination of canting the camera, pulling a harnessed Sam Rockwell with a cable down the hallway and rigging set dressing to slide with him as he went. We added the rolling film cans and other items with visual effects so they could whip by dangerously near him without having to worry they’d injure our actor.”

To amass the wealth of 1970’s gear, the team searched high and low for equipment. “Research told us that Cabaret was cut on two Moviolas,” notes DiGerlando, “but we took license and added the KEM because it presents better for filming. We didn’t feel it was too much of a leap because we did know Fosse’s movies from Lenny onward were cut on KEM. The KEM and one Moviola came from a props house while Blythe Quinlan, one of our assistant art directors, mentioned that her husband had a Moviola on display in their house as decoration, so we rented hers, too!

“Christie’s in L.A. had a lot of the smaller items that we used to fill the shelves, like grease pencils, cores, leader, etc. Many of the reels and canisters and film shipping crates were found on eBay. Because we see some film actually being cut on-screen, we had to have our versions of the ‘Mein Herr’ and ‘Two Ladies’ dance numbers printed on film so we could run it through the KEM for picture. The trims filling the bins were a print of 18 Again! starring George Burns, which we also purchased on eBay.”

It’s with great thanks to Alan Heim, ACE, Jeffrey Wolf, ACE, and the late Norman Hollyn, ACE, for providing the wealth of personal experience in the halls and rooms of those old edit suites from which DiGerlando was able to draw on so many precise details.