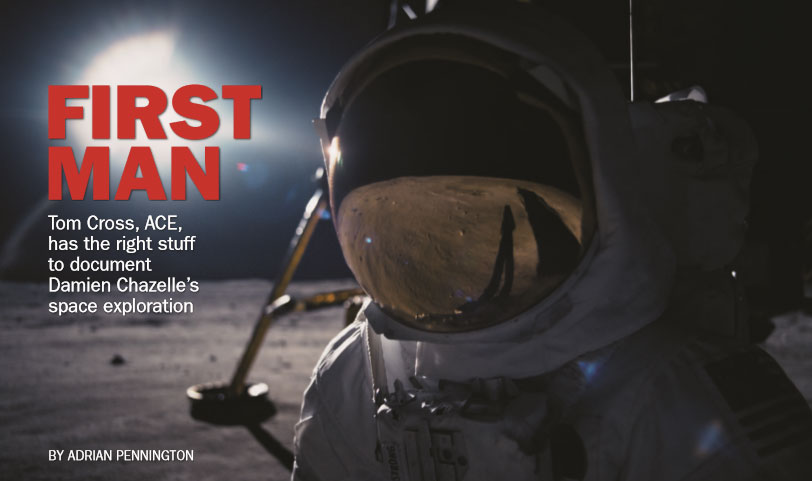 Neil Armstrong’s first step on the moon is probably one of the most significant events of the 20th century. It’s also among the most well documented, with images from the 1969 Apollo 11. Yet the human at the centre of this epoch-defining drama has remained unveiled, in part because Armstrong shielded his family and himself from the heat of world acclaim.

His biography, based on James R. Hansen’s book, First Man: The Life of Neil A. Armstrong, is Damien Chazelle’s choice to follow up 2017’s La La Land. Chazelle handed the script to his wingman, Tom Cross, ACE, in December 2015 while finishing his Hollywood-set musical. “Damien talked about The Right Stuff, 2001: A Space Odyssey and Apollo 13 – all films of which he is a fan – but he wanted First Man to have its own identity and not tread on what those other movies did so well,”

Cross explains. “Since everyone knows the story of Apollo 11 and that they successfully landed on the moon, he wanted to focus on the intimate and personal aspects of the story, especially Armstrong’s relationship with his family.” Chazelle himself has described First Man – starring Ryan Gosling and Claire Foy as Armstrong and the astronaut’s wife, Janet – as an origin story for a real-life superhero. “Instead of presenting the audience with the icon, Damien wanted to dig a little deeper and understand who he was,” says Cross. “We wanted to show Neil as a very talented engineer and pilot but also just a regular family guy who had the courage to risk his life.

Damien always spoke of this juxtaposition as being between the moon and the kitchen.” Research into the era’s space program provided clues to the show’s visual and tonal style. “It was more machine age than space age,” says Cross. “The craft were really like metal cans held
together with nuts and bolts. Damien wanted to reflect that with a lo-fi, analog feel.” This naturalistic aesthetic also influenced decisions to shoot practicals with miniatures and a minimum amount of CGI.

VFX were intentionally designed to maintain the gritty verite approach. For many scenes the camera movement was directed to feel as if it were shot by a documentary crew observing with 16mm cameras. Chazelle asked Cross to study documentaries of the period from pioneers D.A. Pennebaker, Frederick Wiseman and Albert Maysles to lean into how he felt they were cut. “Damien wanted a very different style to Whiplash and La La Land where the cuts are very clean. He still wanted the film to have a certain speed and velocity and that it would feel, like Whiplash, a little overwhelming at times, but he wanted to favor a certain messier aesthetic as long as it felt natural to the story.

This meant I’d select snap zooms, jagged cuts, focus racks and visual moments that might otherwise seem unusable in a different film. Our use of sound and sound effects similarly reflects an organic feel. Overall, the intent was not to have the editorial too cleanly constructed,” Cross explains. 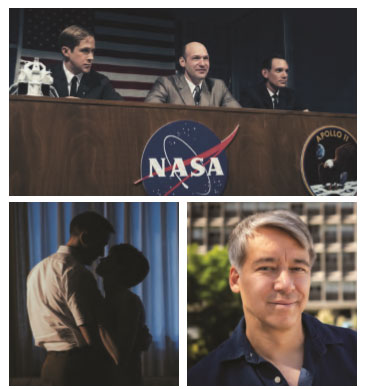 The cinema verite style is contrasted in scenes of the mission to the moon with a more subjective approach. “Damien wanted the audience to climb aboard the craft and experience through Armstrong’s eyes how dangerous and rough the launches actually were.” Two weeks before principal photography commenced, Chazelle shot rehearsals with Gosling, Foy and the actors playing their sons. Rick (played by Gavin Warren and Luke Winters) and Mark (Connor Blodgett) Armstrong were aged 6 and 12 in 1969.

The rehearsals were with full hair, make-up and costume partly to get the cast comfortable together and because the children were first-time performers but also because Chazelle figured he might use some of the footage. It turned out that they used a lot. Explains Cross, “The rehearsals were entirely improvised with Ryan and Claire directed to play at being a family with the boys and with [cinematographer Linus Sandgren, FSF] following them around the house in documentary style.

What came out was a lot of naturalistic performances and movement that felt like Armstrong home movies which is what Damien loved.” Cross was based at the Universal lot during the shoot, which began a year ago, primarily in Atlanta. Shaping the footage in editorial meant some scenes were dropped, others were condensed as Cross and his team injected more of the improvised material into the story. “There was a crucial balance to be struck. We found that when the movie was more ‘mission’ oriented it seemed to become more conventional and a little less interesting. At the same time if the balance was tipped too far into the domestic scenes we weakened the trajectory of getting to the moon. The challenge was to find the right memorable moments of the family life that would contrast best with Armstrong’s dangerous missions. We leaned into the moments where we see Janet and the children while Neil is in space and a lot of that was taken from improvised material.”

Cross says he is proud of many scenes in the film and singles out the press conferences and mission control scenes. “I love the dynamic shooting style here. Damien set them up like a long stage play with 2-3 cameras capturing from several angles. Each take would purposely capture different things. We cut this the way you would cut verite documentary footage. Every actor playing a member of the mission control staff had scripted dialogue even
when they were off camera.

Mary Ellis, our production sound mixer, recorded 24 tracks of audio for each take because every guy in the room was miked.” He also enjoyed the subjective viewpoint of astronaut Armstrong walking up to and boarding the Gemini craft: “As an experience told entirely through his eyes this was a pleasure to cut since it’s not reliant on dialogue. It’s pure visual storytelling.”

A lengthy 25-minute section detailing the rocket launch and docking procedure of Gemini VIII and its near-fatal spin out of control proved most challenging. “At the same time in this sequence we are intercutting Janet listening on the squawk box at Armstrong’s home, with mission control and with the navy reconnaissance and rescue vessel in the Pacific.

This was such a huge part of the movie and we knew that if it didn’t work the movie as a whole probably wasn’t going to work.” Over three features with the director, Cross feels the trust and shorthand between them has strengthened. “We communicated more on this than either of the other two combined,” he reveals. “We have a pretty standard way of working which is that, once wrapped, Damien likes to start at the end and get that to a certain place before circling back. That’s because usually the hardest stuff to figure out is at the end of Damien’s movies. It’s always
a weight off our shoulders to get these important scenes done. 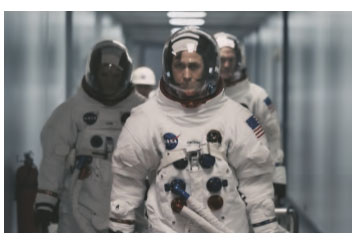 We cut the lunar landing first and then circled back to the beginning, prioritizing certain VFX heavy scenes to help our vendors stay on track.” The Cross-Chazelle shorthand is based on a shared love and knowledge of cinema. “Damien makes a long list of movies for all heads of department to watch and be on the same page. He’ll talk about what he wants for certain scenes by referencing movies, so for the spacecraft scenes in First Man where he wanted to thrust the audience into visceral action, we watched Saving Private Ryan for inspiration.

For a particular emotional scene later we looked at Ordinary People.” Of the scene on the moon, Cross sums up, “We really wanted to focus on the private moments that Neil had on the moon and time he spent alone. These are moments that no one is privy to but if we could suggest the human drama and Neil’s emotions at that time then we’re really doing our job and showing the audience something they haven’t seen before.”