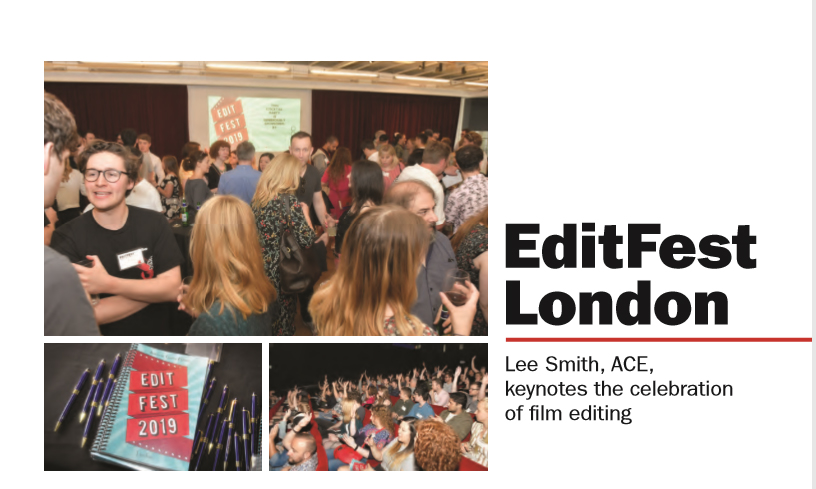 Presented by ACE, the July 29 event at the British Film Institute on London’s South Bank featured a keynote conversation by Smith and panels on episodic dramas, reality programs and feature films.

There are few editors who have enjoyed a greater run of critically-acclaimed hits as Smith – who during his conversation shared clips from his longtime collaboration with Christopher Nolan, including Inception, Interstellar, The Dark Knight, and his Oscar®- and Eddie-winning Dunkirk. He also screened a clip from Peter Weir’s Master and Commander: The Far Side of  the World, as well as the opening sequence to Sam Mendes’ Spectre which was designed to look like a single uninterrupted take with subliminal edits. “My father was an optical-effects supervisor, my uncle ran a small optical lab, my aunt was a neg cutter and my brother an animator so I guess I didn’t have a choice,” the Australian-born editor said of his early career.

Smith described Weir as a “very organic” filmmaker. “Some directors rely on storyboards and arrive on set with a very accurate plan of what they will shoot. Peter just responds to what he sees on the set and will change tack on the day when he realizes something is not working.”

Nolan, by contrast, “has precision knowledge of how he is going to shoot. The edit is built into how he shoots. He knows what he wants and gets what he wants. He’s a force of nature.”

Smith has also collaborated with director Sam Mendes on projects including the in-production period drama 1917. “He will abandon a scene in the middle of shooting if he intuitively feels it’s not working. Doing that requires conviction and the budget to back it up.”

Audience test screenings are the scariest part of the process, he said. “You can’t make any excuses. If the audience doesn’t understand it then you have a problem. But they can’t tell you how to fix your film. The studio will come up with a blueprint for repairing your movie. It is never right. “For example, the third act could be pitch perfect but maybe you’ve brought the weight of a slack second act coming into the third act. There will be lots of people running around in a panic wanting reshoots but you have to take a pause and be confident enough to look again.” Smith added, “You don’t work any less hard on an also-ran movie than on a cinematic masterpiece. You gain experience on every film but if the DNA of a film is simply not there then there’s nothing much you can do.”

How A-list editors managed to get their big break is of perennial interest to aspiring editors and assistants, and this was covered in the feature panel. Turns out you typically need to endure frustration and multiple bad jobs before seizing the moment when it comes along. You also need a lucky break. For Tom Cross, ACE, that was meeting director Damien Chazelle. “We found we liked a lot of the same movies and then made a short version of his script for Whiplash which did well enough to secure finance for a feature,” Cross related.

“The new financiers didn’t want any crew from the short film apart from Damien but [producer] Couper Samuelson wanted me to do it and assured them that he had a more prominent editor in the wings in case there was any problem.” Cross went on to win an Eddie and Oscar for the film. Jeremiah O’Driscoll cheerfully related how he “planned to be the world’s oldest assistant but got foiled in that plan.” Like Cross, he found it a struggle to be trusted to edit solo even by Arthur Schmidt, ACE, for whom O’Driscoll assisted over 11 years. “It was Bob Zemeckis who turned to me on Contact and asked me to cut the opening audio montage,” he said. “Later, when Artie couldn’t work on The Polar Express, I thought Bob would go hire an A-lister like Michael Kahn (ACE) but he asked me. I’ve stuck with Zemeckis ever since.” 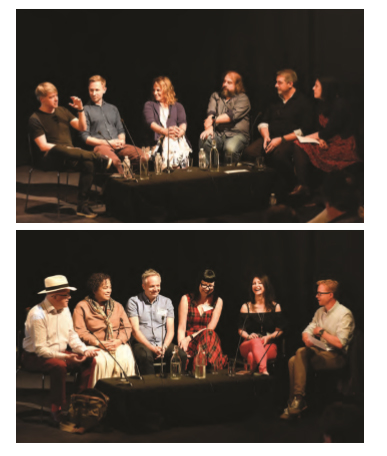 He added, “You really have to suffer or put yourself in at the deep end or basically lie like I did to get yourself in the door.” Paul Machliss, ACE, also had to climb the ladder to the top. “I was a runner at a facility in Melbourne when Sony UK asked if I would do some demos for them of equipment at trade shows.

Aged 23, I turned up at Heathrow with a suitcase knowing no one and that it would be my fault if it all went wrong.” A decade later with experience editing comedy shows he met director Edgar Wright, for whom he most recently cut Baby Driver. Machliss described their current project, Last Night in Soho, as “Edgar’s love letter to a place which is rapidly disappearing.”

He told the audience, “Luck is when timing meets preparation and when that moment occurs, if you are ready, you can grab it.” Virginia Katz, ACE, candidly admitted her route to the cutting room was via her father, editor Sidney Katz, ACE, but faced a different kind of struggle. “Dede Allen [ACE] aside there were very few women editors, but I learned from some of those rare and strong women about being a woman in this business. I’ve also been fortunate in assisting editors who give you a chance to gain experience. I give my assistants scenes to cut since really the only way you can make it as an editor is by getting your hands dirty.” Elliot Graham, ACE, (Milk) says he pestered Mark Goldblatt, ACE, with letters and phone calls until he agreed to meet for a coffee. “Out of that, by circuitous route, I ended up assisting for director Steve Norrington who was cutting The Last Minute at James Cameron’s Lightstorm.

Since the film required me to work seven days a week, 18 hours a day, I ended up literally living in the edit bay for two months. Since I had access to the Avid all night, I went ahead and cut some scenes without telling anyone. Steve ended up recommending me to Bryan Singer for X-Men 2.” Graham underlined, “You can assist as much as you want but it is essential that you cut.” 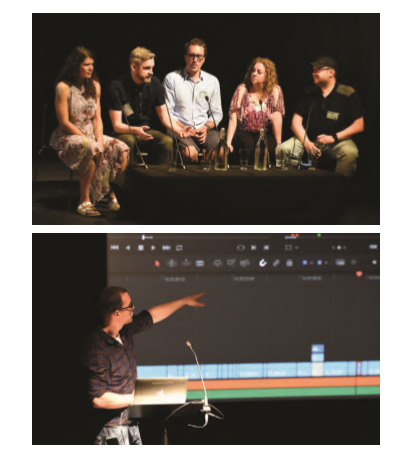 In a conversation moderated by CinemaEditor’s international editor, Adrian Pennington, another panel of editors spoke on the topic TV drama and agreed that television and series content has reached a Golden Age with more and more talent from the feature world taking part.

“We have an Oscar [nominated] director,” said Pia Di Ciaula, ACE, of working with Stephen Daldry on The Crown, which she called “a perfect example of treating a series like a feature film.” She also showed a clip from A Very English Scandal – another such example as it was directed by Oscar-nominated Stephen Frears and stars Hugh Grant and Ben Whishaw. “I had brilliant performances,” she said, adding that the editing challenge was “keeping the viewer informed of time” with flashbacks.

Tony Kearns, editor on Netflix’s interactive drama, Black Mirror: Bandersnatch, agreed that a growing number of A-listers are getting involved with the rising number and range of new content outlets. He welcomes services such as Jeffrey Katzenberg’s new shortform mobile content platform, Quibi, with its 10-minute format, saying of these new models that they will work “as long as the story is compelling and fits the format.”

“It will make binge-watching a shorter experience; we won’t be up until 6am,” he quipped. Of the potential of interactive content such as Bandersnatch, he said, “I don’t think it will replace anything. I think it will be an adjunct.” He advised of working on interactive content, “You need to understand coding. … [Audiences] are not viewers; they are users. And you have to be super organized. It’s a really different experience. It’s technical; it’s daunting; it’s a tremendous experience.”

Terilyn Shropshire, ACE, described her work on Ava DuVernay’s When They See Us, the Netflix drama about the Central Park Five. “When I read the script, the interrogation scene was a linear structure,” she explains, noting that when she and DuVernay got to the edit, it was decided to crosscut between the different boys and their individual interrogations. “You needed to understand that the boys didn’t know one another … and you see the detectives using coerced testimony to implicate the others.”

There were three editors cutting different episodes of the four-part miniseries and collaborating. They were Shropshire, Spencer Averick, ACE; and Michelle Tesoro, ACE. “When we pared [an individual episode] down, we had to make sure it wasn’t something that would be needed later in the story,” she explained. “It was extremely helpful to have that collaboration. Our footage was cross-pollinating.” Editor Cheryl Potter showed an action scene from Amazon series Hanna, on which she worked with director Anders Engstrom. That challenge, she explained, “was setting up that title character Hanna (Esme Creed-Miles) is in danger and the geography of the action.”

Rounding out the panel was Gary Dollner, ACE, who showed the opening of BBC-produced series Killing Eve, which begins as Villanelle (Jodie Comer) locks eyes with and imitates a child in an ice cream parlor. He related that the challenge was intro- ducing a new series in a scene with no dialogue. “The scene was about mimicry, which is a big part of what she does, she observes and regurgitates.” Also during the day, Job ter Burg, ACE, NCE (Elle) moderated a panel on “Cutting for Truth and Finding the Story.”

Editor Anna Price shared a clip from The Trial of Ratko Mladic, which examines the trial of a general convicted of war crimes during the Bosnian War. The challenge, she related, was to “make the political personal. … to get across the historical information about the war in the trial of this one person … also to get the emotional story of the lawyers trying to convict this person, and the victims.” She admitted, “It was a very difficult film to organize.”

Will Gilbey showed his work on After the Screaming Stops, which follows the band, Bros. He described how the clip involved steadily building an argument between the band’s Matt Goss and Luke Goss. “They didn’t have cut approval,” he added.

Also featured was Three Identical Strangers, the story of triplets that were adopted by separate families and learn that each other existed at age 19. Editor Michael Harte, ACE, explained that he wanted to make the film feel like the eras during which they happened.

Elements included archival footage and music. In his clip, he showed the wedding of one of the brothers, Eddy, to his wife Brenda. Harte related that he and director Tim Wardle wrote a letter to Billy Joel asking permission to use “Scenes from an Italian Restaurant,” Joel’s ‘70s classic whose lyrics tell the story of a ‘Brenda and Eddy.’

The Bachelorette’s Sharon Rennert, ACE, shared a tearful scene during which a contestant tells the bachelorette that he is bowing out. “We are mostly on her face; it’s the discovery of  her realizing what’s happening to her,” Rennert explained, calling the cut “deceptively simple” while saying she “cut from the gut and followed her instincts … less is more, and it was addition through subtraction.”

Platinum sponsor Blackmagic Design kicked off the day by hosting a presentation by Patrick Hall, head of post and editor at Liverpool-based LA Productions, who talked about the company’s toolset that includes Blackmagic’s DaVinci Resolve. “We have been using Resolve for finishing for the last three years,” he said, noting that projects have included 10-episode prison drama Clink for U.K. Channel 5, which required a fast turnaround. The series was delivered within 20 weeks – two weeks per episode. “In terms of Resolve, the beauty was it’s incredibly fast,” he said, describing a collaborative and creative workflow.