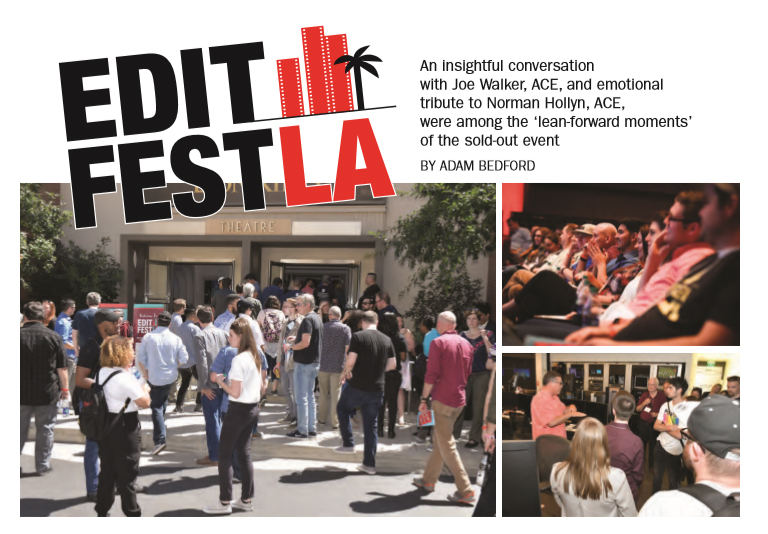 This year’s sold-out EditFest LA – described by one attendee as “Burning Man for indoor people” – featured a one-on-one conversation with two-time Oscar® nominee Joe Walker, ACE, as well as panels titled “Reality vs. Scripted Editing,” “From the Cutting Room to the Red Carpet” and “The Lean Forward Moment,” which was held in memory of the late Norman Hollyn, ACE. Held Aug. 24 at The Walt Disney Studios, EditFest attracted a sold-out crowd of editors, assistants, students and post professionals.

The event began with a short look at DaVinci Resolve 16.1, hosted by Platinum Sponsor Blackmagic Design, before moderator Margot Nack of Adobe introduced the “From the Cutting Room to the Red Carpet” panel that featured Cindy Mollo, ACE (Ozark), Robert Fisher, Jr., ACE (Spider-Man: Into the Spider-Verse), Nena Erb, ACE (Insecure), Heather Capps (Portlandia) and Eric Kissack (The Good Place). Kissack addressed what he sees as a change in comedy and how his inspiration for getting into the business came from movies like Airplane! and TV shows like Saturday Night Live. “I got into comedy thinking that it was easier than drama,” said Kissack, who started in comedy features, having cut films like Daddy’s Home, Bruno and The Dictator before becoming disillusioned and moving into TV. “There’s something broken about comedy movies right now. No one can put their finger on why.” Kissack said that working on television now affords him more opportunities to direct.

“Nowadays striking the right balance between comedy and drama can be challenging, but ultimately more fulfilling,” he said. This led him to his current role on The Good Place as an editor, director and producer. “There are scenes in some comedies where you’re trying to figure out how to salvage a joke. “On [The Good Place], the cast is so talented that every take works and it’s hard to choose one.” 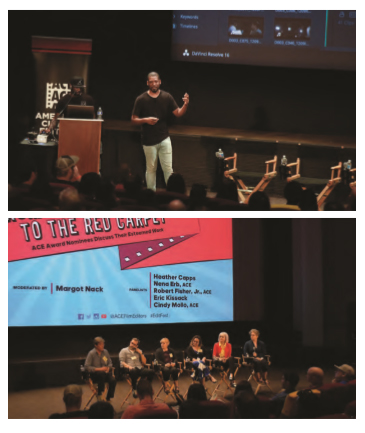 One of the most innovative films to grace our screens of late is Spider-Man: Into the Spider-Verse. Editor Robert Fisher, Jr. described the creative process along with the challenges involved in shaping an animated film. Fisher explained that in the scene during which Miles gets his powers and emerges as Spider-Man, the montage originally played out as individual scenes running concurrently, which didn’t have the same impact.

“The trick we discovered was to get inside his head while showing what was going on,” he said, adding that once they decided to move the story forward in both timeframes simultaneously, the story came together and enough tension was added to give the sequence the impact it needed. Capps talked about the cartoonish universe that her show, Portlandia, exists in. “Portlandia consists of individual sketches with a through line.

On this show, the rhythm is all over the place. Sometimes we’ll even throw the joke under the bus in the edit.” The modular format of the show sometimes allowed Capps and the other editors to switch out meatier sketches between shows to help with pace and timing.

Later, the issue of pigeonholing took center stage. Capps described an interview during which she was told that she couldn’t edit drama. “You can change their mind but their preconcep- tions are usually set in stone. You probably don’t want to work with them anyway.” Sometimes pigeonholing can work for you. Erb related that she was brought onto the BET drama Being Mary Jane because the writers and producers were retooling the show to make it lighter and saw her comedy background as an asset. Mollo noted that even though most of her work has been in the drama space, her early career featured some single-camera comedy pilots. She advised up-and-coming editors, “Take any opportunity you can to start in comedy editing as the transition to drama is easier.” 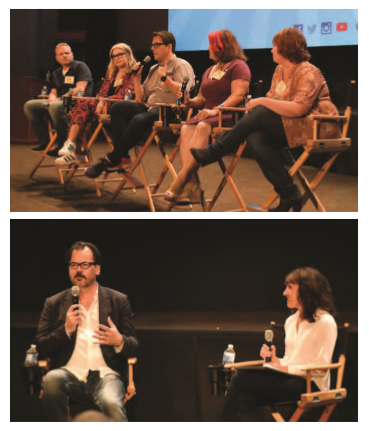 The topic of pigeonholing also entered the next panel, which was intent on demystifying the differences between reality and scripted editing. Panelists Tom Costantino, ACE (The Orville), Molly Shock, ACE (Naked and Afraid), Jamie Nelsen, ACE (Black-ish), and Maura Corey, ACE (Good Girls), discussed their experiences in both genres and frustration at the industry’s reluctance to hire unscripted editors. “There’s a misperception that if you cut scripted, you can’t cut reality and vice versa,” said Corey. “All of us have worked in both worlds and we know it isn’t true.” “We’re all storytellers and we like to work,” agreed Shock. “We as editors have valuable skills that can transfer.” Nelsen related that her time as an editor on reality drama Intervention informed her work in scripted comedy. “It was all about psychology and following the emotions, motivations and intentions of each character.” Costantino added that he’s now seeing a little less prejudice toward unscripted editors as some producers are starting to notice that other experience can pay off. “Everything in your toolbox has value. Every single job you do, you’ll take a piece of that with you and that will make you a better editor.” The panelists agreed that when all is said and done, it comes down to luck. “You can’t manufacture luck, however, you can probably manufacture access to luck,” said Costantino.

Next up, film historian Bobbie O’Steen took to the stage for a oneon-one chat with Joe Walker, ACE, who earned Oscar nominations for 12 Years a Slave and Arrival. London-born Walker’s love for film began when he started playing 8mm Keystone Cops films (bought with his paper route money) over his father’s old Wagner records.

He trained as a classical composer and learned the craft of editing in the BBC’s Film Department at Ealing Studios in West London, where he cut everything from classical music documentaries to police dramas to children’s television which he later described as “varying his diet.” Walker recalled an experience early in career by where he was able to cut a scene together; coverage consisted of one wide, one cutaway and singles. 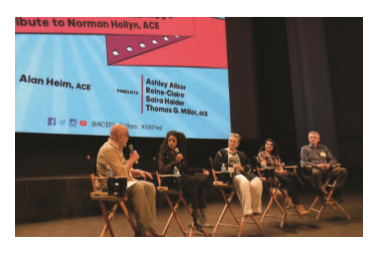 After spending an afternoon putting the scene together using all of the available coverage, his mentor watched the scene and said, “Not bad. Show me the wide shot.” The wide had all of the movement and body language that the scene needed, so they went with it instead. The important lesson that Walker learned that day was that just because they shot it, doesn’t mean you have to use it. O’Steen also brought up the topic of landscaping the cut.

“It’s manipulating pace to your advantage. [Editing] is kind of like a striptease act,” Walker said. “Arrival is showing an ankle. You see a puff of smoke, and bit by bit you discover more about these creatures. But you’re constantly trying to work out where the audience is and you better not disappoint them.” O’Steen joked that “time is [Walker’s] superpower.” “I should probably have a T-shirt made [of that],” mused Walker.

The event ended on a bittersweet note with EditFest’s annual “Lean Forward Moment” panel. The term was coined by the late Norman Hollyn, ACE, who was the inaugural recipient of the Michael Kahn Endowed Chair in Editing at USC’s School of Cinematic Arts. Hollyn was a treasured friend and mentor to those of us in the editing community, and he moderated the “Lean
Forward Moment” panel at EditFest for many years, during which he and the speakers would discuss those pivotal moments in a cut. This year’s panel was made up of former USC students and teaching colleagues who shared memories of Hollyn before continuing his tradition of screening ‘lean forward moments’ from their favorite films.

Moderated by Alan Heim, ACE, the speakers were former teaching assistant Ashley Alizor, advanced editing student Saira Haider and USC editing faculty members ReineClaire and Thomas G. Miller, ACE. Heim recalled his 40-plus year friendship with Hollyn, saying, “I think of him; I miss him. He’s done so much for the editing community, bringing new people into it, mentoring people, teaching people and this (panel) is a sampling of a lot of the different things he’s done.” “His loss was a tough one,” Heider said. “but I still use the things that he taught in our class to this day.”

Added Miller, “He loved to talk. He loved to share his knowledge. He was always interested in what we were doing.” “I learned more about people from Norm than I did about editing,” Alizor said. Miller and Reine-Claire commented on working with Hollyn and his teaching philosophy. “Norman always liked for us to teach some things that were theoretical and some that were practical, but always something emotional,” Miller said.

“Whatever got the best story and had the most emotion was what he wanted us to teach.” It was announced during the session that in Hollyn’s honor, his former office at USC will be transformed into a communal meeting space for students and faculty members. “He was always in the moment,” Reine-Claire said. “You could walk into his office, he would drop everything and start a conversation with you.

You would remember that conversation forever.