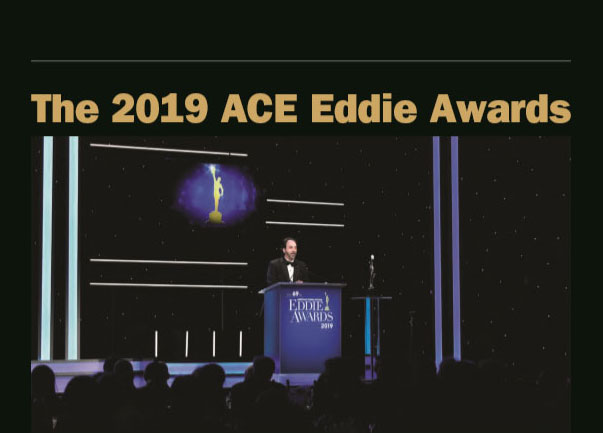 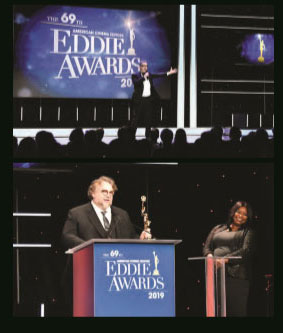 More than 1000 guests attended the black-tie ceremony, held Feb. 1 at The Beverly Hilton hotel, with ACE President Stephen Rivkin, ACE, presiding over the festivities and comedian Tom Kenny serving as the host.

Del Toro’s award was presented to him by friend and collaborator Octavia Spencer, who co-starred in the director’s best picture Oscar®-winning film, The Shape of Water.

“This is a profession that I tried myself when I was an amateur filmmaker making Super 8 and 16mm films,” del Toro said of his early editing career. “It’s not just the craft and the technique that I recognize, it’s the partnership that I value. It’s the most intimate and most vulnerable time of filming.” 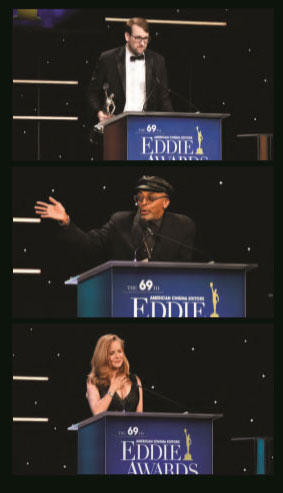 Del Toro has a prolific track record producing, writing and directing for film and TV including Cronos, Hellboy, Pan’s Labyrinth and The Devil’s Backbone and is currently embarked on his first directorial feature animation, Pinocchio, for Netflix.

He continued, “What makes editing unique is that I work with the actors, then I block it with the cinematography but I am very, very careful not to tell the editor how to cut it or what I am thinking because you learn that when two people agree in a room then one of them is not needed. An editor listens to the movie and that is what I most value.”

McKay, whose credits include The Silence of the Lambs and Philadelphia, thanked his grandmother for first taking him to the cinema when he was 6 years old. “It was a black-and-white film that then exploded into glorious Technicolor. It blew me away and my course was set on the road to making movies.” He added, “To receive this honor from all of you is an enormous thrill.”

Ludwig’s distinguished career editing TV movies saw him win two Eddies and a further eight nominations plus several Emmys® for work including An Early Frost and The Attic: The Hiding of Anne Frank. While he was unable to attend the awards, he said in a statement, “I feel extremely fortunate to have had the experience in the industry that I have had and I commend every one of the fantastically talented and generous people who I have met and worked with on that journey. Thank you so much ACE and all its members for this award which I dedicate to them.”

Queen biopic Bohemian Rhapsody, edited by Ottman, won Best Edited Feature Film (Dramatic). “This was a very inspiring film and a labor of love in trying circumstances,” Ottman said, making the audience laugh by adding, “It’s always great when you get the first dailies in and you realize no one has been miscast … because you don’t have to polish that turd for a year.” Royal period film The Favourite, edited by Yorgos Mavropsaridis, ACE, landed Best Edited Feature Film (Comedy). Mavropsaridis thanked director Yorgos Lanthimos “for taking me along on his journey.” He added, “It is a great honor for me, a Greek, to receive this award thanks from ACE.” Oscar nominees were out in force at the ceremony including Spencer, Spike Lee, Bradley Cooper and Alfonso Cuaron. 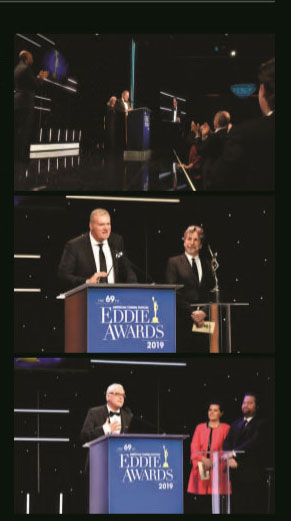 The Roma director, who was also an ACE Eddie Award nominee for the film, said on the red carpet, “I always enjoy partnering with someone in the edit because, for me, it would otherwise be a very lonely experience. In this case with Adam Gough who is an amazing editor and the partnership we have enriches the whole process.” Spider-Man: Into the Spider-Verse, edited by Robert Fisher Jr., won Best Edited Animated Feature Film; and Free Solo, edited by Bob Eisenhardt, ACE, for Best Edited Documentary (Feature).

“This year is special because of the passing of my dear leader, Anthony. He talked a lot about telling people to get out and explore the world and I was lucky to have had an opportunity to follow him on travels where the message was always about building bridges not walls.”

ACE Eddies were awarded to Malcolm Jamieson and Geoffrey Richman, ACE, in the Best Edited Miniseries category for Escape at Dannemora, “Episode Seven,” and to Greg Finton, ACE, and Poppy Das, ACE, for Robin Williams: Come Inside My Mind in Best Edited Documentary (Non-Theatrical).

The latter award was presented by director Spike Lee who said, “Any documentary can show us something real but not any doc can show us what is true.” 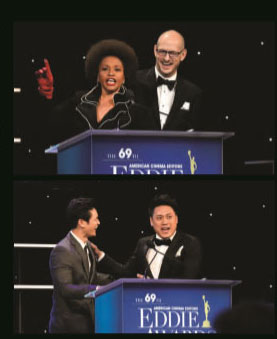 Emma Hickox, ACE, presented the Anne V. Coates Student Editing Award to Marco Gonzalez of Boston University, one of hundreds of competitors from film schools and universities around the country. This honor was renamed this year in honor of legendary editor Coates, who was Hickox’s mother, who passed away this past year.

Actress Jenifer Lewis (Black-ish) presented and said, “I never get a chance to say anything to a room full of [editors] but I want to say that you may think we don’t see you, but I am honored to be here now and say to you all that we know how hard you guys work.”

Jon Chu, director of Crazy Rich Asians, called the audience “the mad architects of Hollywood” and director Peter Farrelly (Green Book) said, “The editor is the director’s best friend. Not just because we spend the most time together on a movie but because when we have something good going you make our dream come true and when it is less good you save our asses.” 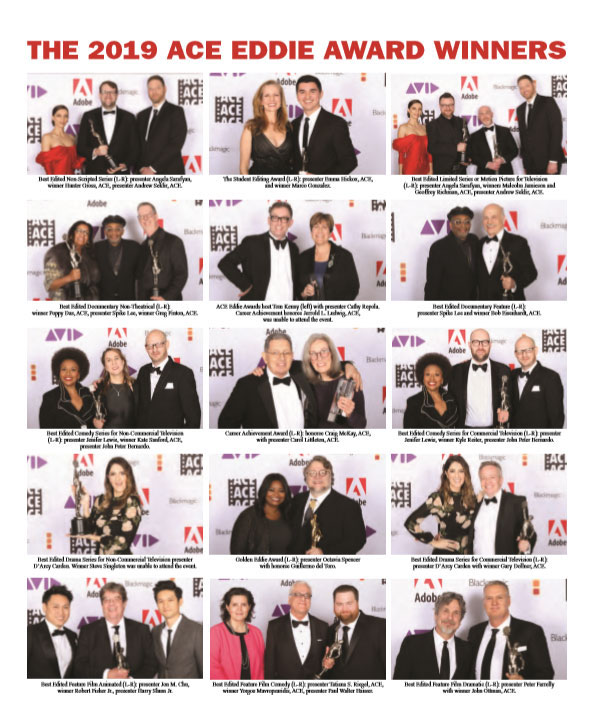