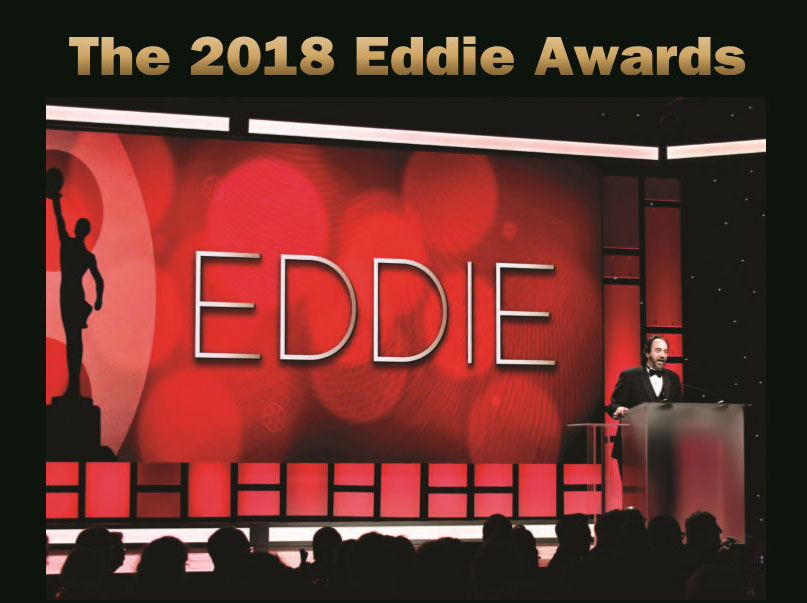 Before a sold-out crowd of more than 1,000 guests, a total of 10 awards were handed out in feature, TV and documentary work. Additionally, Leon Ortiz-Gil, ACE, and Mark Goldblatt, ACE, received Career Achievement Awards and Vince Gilligan was awarded the Golden Eddie.

“Editors are so important to dramatic storytelling in TV and cinema and ACE has the cream of the crop,” said Gilligan, the creator of Breaking Bad and Better Call Saul. “We live in a golden age of television and editors are the final folks who get their hands on the material to shape it before it reaches the audience. They are the ones who can make it better.

“Basically, for the past 30 years I’ve sat on a whole lot of comfy sofas behind brilliant editors doing their damnedest to make me look like some kind of genius,” he added. “I honestly believe I would have a better shot at landing the space shuttle than I would at operating an Avid.” As he thanked ACE, he said he shared his award with his Breaking Bad and Better Call Saul editors, Skip Macdonald, ACE, who presented the trophy; Kelley Dixon, ACE; Lynne Willingham, ACE; Chris McCaleb and “all the wonderful editors and editing assistants I have worked with and learned from over the past decade.”

Goldblatt – whose award was presented by director Joe Dante – was Oscar® nominated for Terminator 2: Judgment Day and his credits also include the original Terminator and other blockbusters such as X-Men: The Last Stand, Pearl Harbor and Starship Troopers.

“As cinema editors we have the privilege to work in the greatest art form I know,” said Goldblatt, also an ACE past president, who rallied the more than 1,000 guests. “At their best, movies are about mass collaboration with a higher goal than simply to make the best entertainment possible, and that’s to have a shared experience that rises from our shared creativity. Team efforts are all about our emotional investment. If you’re passionate about your work, you will make a better picture. If you really feel it, the audience will too. So to that end I say
be bold in your editing, be fierce and never be afraid to go to places the director may never have even thought to go, because it might be exactly where they need to go.”

Ortiz-Gil – a three-time ACE Eddie Award nominee with credits including Law & Order, 24 and Dragnet – was presented his Career Achievement Award by actress Mariska Hargitay.“I feel euphoric,” he said. “I can’t really wrap my mind around that I’m here. I would rather have this award than an Oscar because I am immortal now.

“I joined ACE in 1978. ACE is the spokesperson for editors on a very high level,” he continued. “ACE does so much good. They mentor up-and-coming editors and their diversity program is wonderful.
“I’d like to thank ACE and the board of directors for this award; Chris Jenkyns, my stepfather, for giving me my first job in the film business; Chuck Silvers for hiring me at Universal and Dick Elliott for teaching me the art of editing. And the industry minority program for opening the door to me to become an editor.” The competitive categories again showcased excellence in editing. “I am looking around at editors who have had very long careers. It is wonderful to be nominated, especially by your peers,” said Smith, accepting the Eddie for his work on Christopher Nolan’s epic, Dunkirk. “The person I must thank the most is the genius who wrote, directed and produced this film, with his wife Emma, Chris Nolan who I have had the pleasure to have had a long relationship with,” he said. “We’ve been through many war-like battles to get the films finished on time and I have to say Chris’ sense of editing is second to none and I share this award with him and thank God he doesn’t know how to use an Avid. I certainly will never show him – I mean to be fair he can push the space bar.” As she received the Eddie for I, Tonya, Riegel said, “There are times in your career where lightning is trapped in a bottle and the stars align and everything comes together.

This is amazing “I’ve worked with director Craig Gillespie on five features over 10 years and it’s phenomenal,” she said. “We have a shorthand and an ease and honesty where we can battle things out or everything goes very smoothly. “

ACE is important because editing is something a lot of people don’t know about,” she added. “We are supposed to be behind the scenes, invisible and it’s nice to be acknowledged. It’s nice for me to meet my peers and to congratulate them. It’s good too for the public to see this and to learn more of what the art of editing entails.” documentary feature was awarded to Jane and its editors, Joe Beshenkovsky, ACE, Will Znidaric and Brett Morgen.

It was an especially big night for Znidaric, who received a second Eddie for Five Came Back: The Price of Victory in the category of best edited non-theatrical documentary.

The Fargo episode “Who Rules the Land of Denial?” delivered Andrew Seklir, ACE, the Eddie for best edited drama series for commercial television. 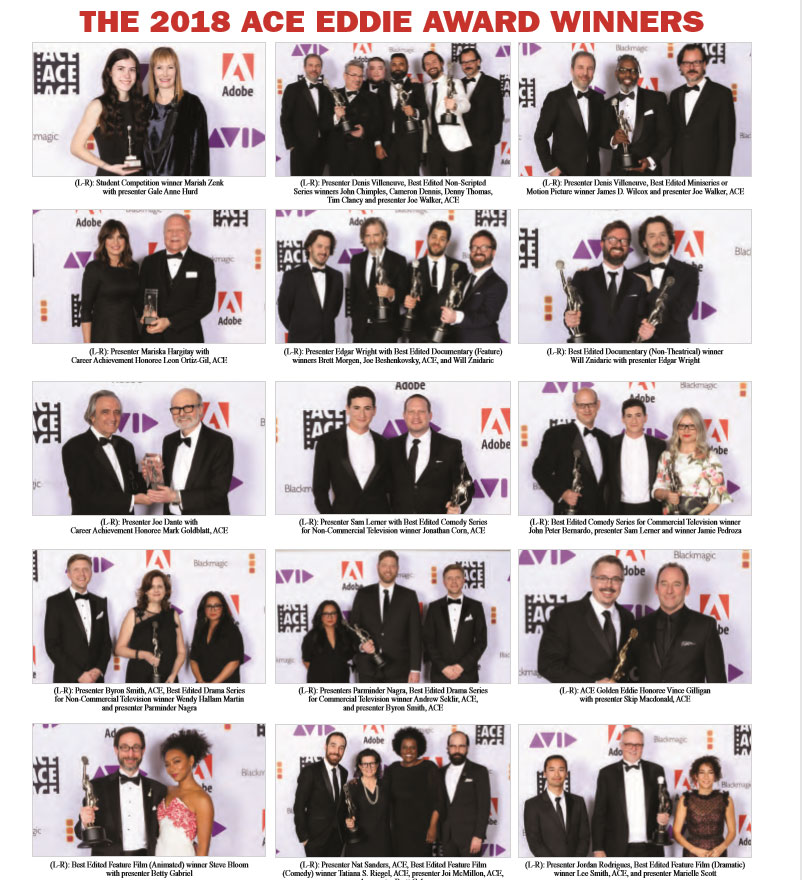